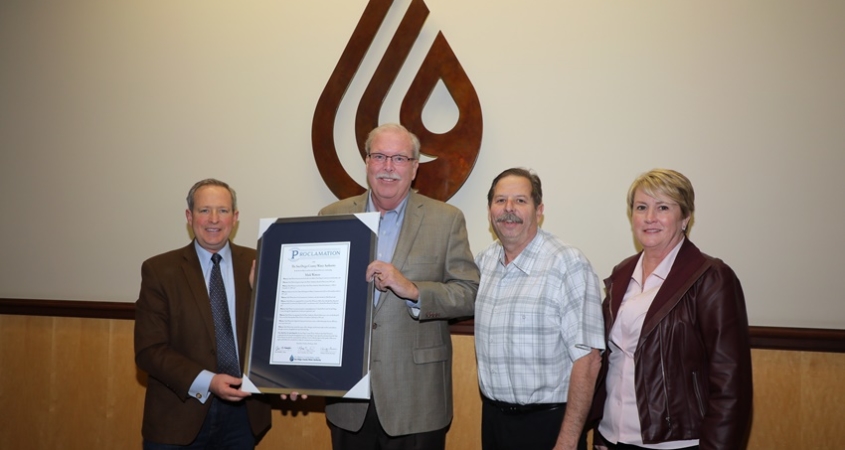 The Board issued a proclamation congratulating Watton on “his long and distinguished service to San Diego County upon his upcoming retirement from the Otay Water District” and commended him “for a lifetime of service that has improved the quality of life in our region.”

After 15 years leading the water agency that serves Southeastern San Diego County, and nearly four decades representing the water interests of the county and state, Watton plans to retire in late March. He first served on the Water Authority’s Board of Directors in 1985 and was Board Chair from 1995 through 1996.

Watton’s water industry career began in 1983, when he was elected to Otay’s Board of Directors. He served in that role for 18 years. Watton was then hired as Otay general manager in 2004.He currently manages the district’s $106 million annual operating budget and 138 employees.

“I’m completely satisfied. It’s been a wonderful career,” said soon-to-retire General Manager Mark Watton. “It’s so gratifying to retire in this industry, knowing there is a new generation coming in, like our new general manager, to continue doing a great job.”

Watton was referring to Otay’s Assistant Chief of Water Operations, Jose Martinez, a U.S. Navy veteran, who was recently hired to be Otay’s new general manager.

“Mark was a key player in diversifying the region’s water supply by securing highly reliable supplies from the Colorado River that will continue to benefit our region for decades,” said Water Authority Board Chair Jim Madaffer. “If we had a hall of fame for water pioneers in the San Diego region, Mark Watton would definitely be a member.”

Today @sdcwa honored @OtayWater GM Mark Watton with a proclamation for "his long distinguished service to SD County upon his retirement from the Otay Water District." Chair @JimMadaffer commended him for a lifetime of service that has improved the quality of life in the region. pic.twitter.com/VgfhGG2xOa

Watton has also presided over Otay’s deployment of its state-of-the-art leak detection and repair program that has reduced water loss 43% over seven years. In 2018, a 3.3% reduction in water loss saved Otay customers $1.3 million, helping to keep rates low.

“Not only has Mark made a significant impact locally for Otay’s service area, but also regionally and statewide,” said Otay Board President Gary Croucher. “He is an influential thought leader in the water industry and his commitment to our region is unmatched.”

Watton’s leadership has maintained Otay’s AA credit rating from Standard & Poor’s for more than a decade. While many public agencies struggle to keep up with their pension obligations, Watton’s prudent management of Otay’s finances made it possible to fully fund the District’s Other Post-Employment Benefit plan and substantially fund its pension plan in upcoming years.

An innovator throughout his career, he identified an opportunity for a binational solution to Otay’s continued need to diversify its water supplies. On May 16, 2017, the U.S. Department of State granted Otay a presidential permit to build a nearly four-mile potable water cross-border pipeline and associated facilities at the U.S.-Mexico border for the importation of desalinated seawater produced in Mexico. Although obtaining the presidential permit was a milestone accomplishment, Otay’s part of the project is no longer moving forward.

☔️ Weather update: Our rain barrels and veggie gardens are loving the rain!...

How are you enjoying today’s rainstorm? Show us in the comments 👇

Water News Network:
💧 Welcome to the Board: Eric Heidemann, City of Poway

A band of thunderstorms with heavy rain and possibly small hail are moving into ... downtown San Diego to Coronado as depicted on NWS radar moving slowly northeastward #SanDiegowx

🌈Something to brighten your day ☔️💧Sixteen determined elementary school students in Fallbrook made sure a 2021 "Be WaterSmart" calendar would be published despite the coronavirus pandemic. Story: bit.ly/3b8wK5V ... see moresee less

🌈 Something to brighten your day. Sixteen determined Live Oak Elementary School students in Fallbrook made sure a 2021 "Be WaterSmart" calendar would be published despite the coronavirus pandemic. Check out their colorful poster entries: bit.ly/3b8wK5V 🎨💧 ... see moresee less