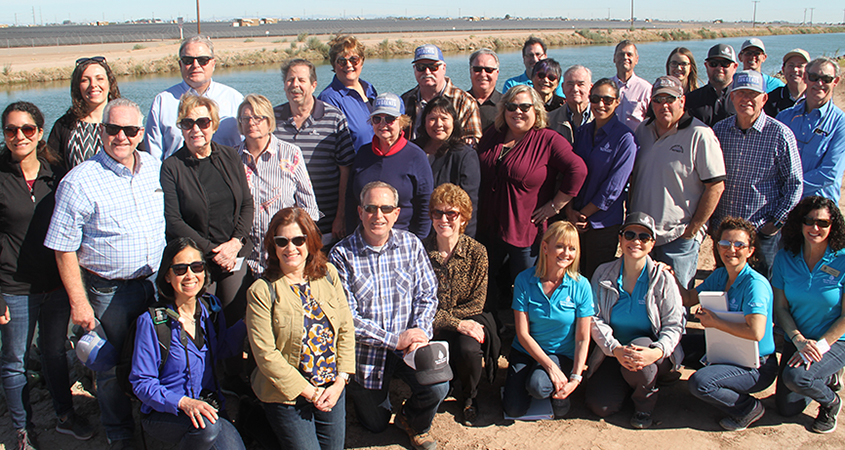 The San Diego County Water Authority’s Board of Directors visited the Imperial Valley January 30 for a day-long tour that highlighted areas critical to the agency’s Regional Conveyance System Study.

Board members approved a study in July 2019, to evaluate a new regional water conveyance system that would deliver water from the Colorado River to San Diego County and provide multiple benefits across the Southwest.  The Board will hear results from the first phase of the study this spring before deciding whether to move ahead with Phase B.

The tour started in southwestern Imperial County, where the All-American Canal meets the Westside Main Canal, an historic location where, starting in 1919, water from a canal system in Mexico first flowed into the western half of the Imperial Valley. It is also the place where three potential routes for a new water conveyance system, now being analyzed in the study, would begin.

“The goal of the study is to determine first, whether there is a cost benefit to the Water Authority and its member agencies in the long-term to build a regional conveyance system to transport our independent Colorado River supplies from the Imperial Valley directly to San Diego County,” said Dan Denham, the Water Authority’s deputy general manager.

“This canal is a lifeline to the Imperial Valley,” says Tina Shields, @IIDatWork water dept. manager, standing where the All-American Canal meets the Westside Main Canal & where water from a canal system in Mexico first flowed into the western half of Imperial Valley. #IVtour2020 pic.twitter.com/JgkM8LXZiG

The trip included visits to several agriculture fields for a first-hand look at the latest conservation techniques used by farmers under the 2003 Colorado River Quantification Settlement Agreement.

Tom Brundy has been farming in the Imperial Valley for more than 40 years, and today he grows hay on 4,000 acres. Most of the hay produced by the farm is sold to customers in San Diego County, one of many connections between Imperial and San Diego counties.

“Every farmer in Imperial County is conserving water, and quite a bit,” said Tom Brundy, president of the Imperial County Farm Bureau. “I have subsurface drip on alfalfa, we’re using soil monitors and soil sensors to help us in our water scheduling, and we continue to modify our methods using new technology that saves water.”

Farmer Alex Jack: ‘out of the box thinking’

Jack Bros. Inc. also is an innovator in on-farm conservation. Alex Jack is a third-generation farmer using pump back systems and permanent drip irrigation. Many of his crops, from lettuce to cauliflower, are grown with zero water runoff.

Jack calls his progressive approach “out of the box thinking.”

“My goal is to be the best farmer possible,” said Jack. “If I happen to conserve water, that’s fantastic, but most of the new high-technology methods are conserving water.”

Jack Bros. Inc. is an innovator in implementing conservation. Alex Jack is a third-generation farmer using pump back systems and permanent drip irrigation and systems. Jack says his approach is “out of the box.” #IVtour2020 #cawater @IIDatWork @ICFarmBureau @Ivh2O #agriculture pic.twitter.com/X2jK7TDGBJ

The east side of the Salton Sea was the final stop on the Imperial Valley tour. Board members got an update on restoration efforts, including the 500-acre Red Hill Marina Wetlands Project, one of the first Salton Sea Management Program projects.

Representatives from the California Department of Water Resources, the California Department of Fish and Wildlife, and the Imperial Irrigation District described how the area was once a prime bird-watching location before the Salton Sea began receding. The 500-acre project will decrease dust emissions by creating a shallow marine habitat using water from the Salton Sea and a nearby river.

The #SaltonSea is the final stop on the Imperial Valley tour, for an update on restoration efforts, including the 500+ acre Red Hill Marina Wetlands Project – one of the first Salton Sea Management Program projects. https://t.co/J2VQ6xsXCW #IVtour2020 #cawater #habitat #wetlands pic.twitter.com/ke4ae5F7Su

The project is a partnership between the federal and state government, and the Imperial Irrigation District – with a portion of the funding coming from a federal assistance program that the Quantification Settlement Agreement Joint Powers Authority helped fund. Work is expected to be completed by the end of this year.

The Imperial Valley tour, which highlighted the partnerships between San Diego and Imperial County, was part of an on-going series of tours led by the Water Authority’s Colorado River Program.

💧 Olivenhain Employee Dominic Brunozzi is Mechanical Technician of the Year

The San Diego region's water use was one of the positive trends in the 2020 ... #QualityofLifeDashboard report released Oct. 29 by the Equinox Project. The Dashboard measures & benchmarks 16 indicators of the county's quality of life. https://bit.ly/37S4PpG #cawater #sonpsummit

The Water Authority is gearing up to construct a 2

"A lot of our jobs are unrecognized by the public.

"I work with our development services group to ass

“A professor in college introduced me to the wat

“The most rewarding aspect of my job are the rel

"One of biggest misconceptions about working in th

💧 Olivenhain Employee Dominic Brunozzi is Mechanical Technician of the Year

Ten student artists were selected from 174 student participants as the winners of the 2020 Helix Water Di...
view on facebook
·share

Dominic Brunozzi was recognized for the third time in five years for his dedication to public service and...
view on facebook
·share