With all of the extreme heat and lack of rain here in California, some have said that we’re currently in the state’s worst drought in modern history. The drought is so bad that the state of California has now cut off water supplies to farmers in the Central Valley.

So how is the water supply here in San Diego? KUSI’s Dan Plante joined viewers live from Miramar Lake with the local situation.

Increasingly ominous signs suggest that we are entering another multiyear drought in California. The State Water Project recently reduced projected water deliveries for 2021 from 10% of requested supplies to 5 percent, and on April 21, Gov. Gavin Newsom declared a regional drought emergency in the Russian River watershed in Northern California.

But it’s a different story in San Diego County. 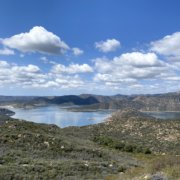 During May, share what the value of water means to you on Instagram for the chance to win great prizes from our partners around San Diego County, including Balboa Park attractions, San Diego Botanic Garden, and the Water Conservation Garden.

The San Diego County Water Authority and its 24 member agencies are hosting their annual photo contest to celebrate Water Awareness Month in May.

But water is also there for all the fun in-between moments when we’re outdoors and enjoying the best nature has to offer. From surfing San Diego County’s beautiful beaches, to exploring waterfalls in the backcountry, to fishing and boating in the region’s lakes. Water brings so much enjoyment, and it also powers our key industries such as brewing, tourism, manufacturing and agriculture.

As the region celebrates the value of water, it’s important to remember that San Diego County has a proud history of improving water-use efficiency. In fact, over the past 30 years, per capita water use has dropped by more than 50% and maintaining water-smart habits is especially important during what’s turning out to be a very dry year across California.

Since 1991, the Water Authority’s water-use efficiency programs and initiatives cumulatively have conserved more than 1 million acre-feet of water. These savings have been achieved through measures that include incentives on water-efficient devices, legislative efforts, and outreach programs, including photo contests.

Using water efficiently is a way of life and an important responsibility that comes along with the benefits of living in a beautiful Mediterranean climate like San Diegans enjoy.

Over the past decade, residents and businesses across the county have adopted “WaterSmart” plants, irrigation technologies and habits that not only save money, but also create vibrant yards, reduce energy use, protect natural resources and reduce landscape maintenance.

Value of Water photo contest May 1-31

Enter the Value of Water Photo Contest on Instagram from May 1-31, 2021, for the chance to win great prizes from local tourist attractions.

*The 2nd Prize winner will have their choice of tickets to the San Diego Botanic Garden (Encinitas) or the Water Conservation Garden (El Cajon).

The San Diego County Water Authority’s board has directed its staff to explore opportunities to help other water districts weather an emerging drought across California.

The authority said that because of three decades of investment in supply reliability, along with a continued emphasis on water-use efficiency, the San Diego region has sufficient water supplies for multiple dry years.

Those investments include high-priority Colorado River water from the Imperial Valley, seawater desalination, and access to the Semitropic Original Water Bank in Kern County, where the authority has stored about 16,000 acre-feet of water — enough to supply more than 30,000 homes for a full year.

By the time this column is published, Northern California may be receiving some much-needed rain, and possibly some snow. However, late-season precipitation does not change the reality that California is in one of its periodic droughts after two dry years.

Major Northern California reservoirs are only about half-full due to scanty runoff from mountain snowpacks, farmers are getting tiny percentages of their normal water allotments, and local water agencies are beginning to impose restrictions on household use.

California Gov. Gavin Newsom has declared a drought emergency for parched water systems along the Russian River watershed that serve hundreds of thousands of Californians in two counties. Most of the state is suffering severe drought conditions due to low rainfall and snowpack, but state water officials said that the other regions aren’t hit hard enough yet to declare a statewide emergency.

The targeted approach drew praise from the San Diego County Water Authority, which at this point has sufficient supply.

“We applaud Governor Newsom for taking a targeted, flexible, and iterative approach to drought management that provides support for individual regions that are suffering from drought while also recognizing regions like San Diego County that have sufficient water supplies due to three decades of investments in supply reliability,” said Water Authority Board Chair Gary Croucher. 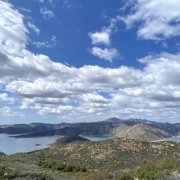 The San Diego County Water Authority’s Board of Directors April 22 authorized staff to explore opportunities to help other water districts weather an emerging drought across California.

The Board authorization allows Water Authority staff to assess selling, leasing, or swapping its Semitropic water with agencies that need it. Increasingly severe impacts of drought are already being felt  in Central and Northern California. Any agreement recommended by staff would be brought to the Board for approval.

“Given the extraordinarily low 5% allocation on the State Water Project and the location of our groundwater in the Central Valley, it’s a perfect time to explore mutually beneficial agreements with agencies that need more water this year,” said Water Authority Board Chair Gary Croucher. “The Water Authority is committed to innovative ideas like this to improve water management across the arid West and at the same time benefit San Diego County ratepayers.”

Help for agencies during drought

Given its current water supply portfolio, Water Authority staff will look at the potential to use its stored water to help other agencies and generate revenues for the benefit of San Diego County ratepayers.

At the same time, the Water Authority continues to pursue authorization to store water supplies which are qualified for storage in Lake Mead, which is declining due to a two-decade drought in the Colorado River Basin. If the Water Authority could store water there, it would also open up the potential for other water management strategies to improve Lake Mead water levels and water supply reliability for the Basin States.

“It’s in everyone’s best interest to think creatively about long-term water management even though that will mean doing new things in new ways,” said Croucher. “A fresh, collaborative approach is our best hope to act as a multi-state region to meet the needs of people, farms and the environment.”

California is facing a second consecutive dry water year. Snowpack and precipitation are below average in both the Northern Sierra and the Upper Colorado River Basin, and most California reservoirs are below their historical averages for this time of year. On March 23, the California Department of Water Resources reduced the State Water Project allocation from 10% to 5%. The only other year on record with such a low SWP allocation is 2014. Following the state’s April 1 snow survey, DWR Director Karla Nemeth declared the state’s conditions “critically dry.”

Those circumstances highlight the importance of San Diego County’s supply diversification strategy that began after the drought of the early 1990s. Back then, the region was hit with 50% supply reductions because it relied almost entirely on one source. Since then, the region has added a significant new transfer of conserved agriculture water from the Imperial Valley, completed the All-American and Coachella Canal lining projects to receive conserved Colorado River water, invested in the Claude “Bud” Lewis Carlsbad Desalination Plant, and continued to embrace water-use-efficiency measures that have become a way of life in San Diego County.

The Water Authority’s draft 2020 Urban Water Management Plan shows that regional investments in a “water portfolio approach” to supply management and a sustained emphasis on water-use efficiency mean that San Diego County will continue to have sufficient water supplies through the 2045 planning horizon – so the region’s residents and economy remain safe even during multiple dry years.

April 21, 2021 – “We applaud Governor Newsom for taking a targeted, flexible, and iterative
approach to drought management that provides support for individual regions that are suffering
from drought while also recognizing regions like San Diego County that have sufficient water
supplies due to three decades of investments in supply reliability. The governor’s Water Portfolio
Strategy aligns with our long-term investments in a diversified water portfolio, desalinated
seawater, conserved water from Imperial County, local water-use efficiency measures, and
increased water storage. Because of those actions and others, our residents have enough water for
2021 and future dry years. We also applaud the efforts of our ratepayers, who have cut per capita
water use by nearly half since 1990.

“In addition, the innovative and resilient supply portfolio created by the Water Authority and its
24 member agencies puts our region in a unique position to provide solutions that can help
California weather this drought and future droughts – for instance, by storing water in Lake
Mead. We look forward to working with the governor and his staff to collaborate on projects and
programs where we can use our assets and experience to help areas that are hit hard by drought
in the face of a changing climate.

“Finally, we are proud to be a founding member of the coalition of water agencies mentioned by
the governor that support the important scientific research being done on climate change by our
own Scripps Institution of Oceanography.”