Water agencies throughout the West are changing their operations during the coronavirus outbreak to make sure cities and farms don’t run dry. 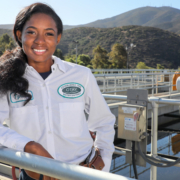 Career opportunities for women in the water and wastewater industry at every level are the focus of the third annual Women in Water Symposium January 16 at Cuyamaca College.

Vanessa Murrell, grant manager for the Center for Water Studies at Cuyamaca College, said the conference’s goal in its third year is to create a community of people with the interest and aptitude to take on what were previously considered non-traditional careers.

“It’s a matter of recruiting great talent that transcends gender and ethnicity,” said Murrell. “It’s making sure the water workforce represents the community it serves.” 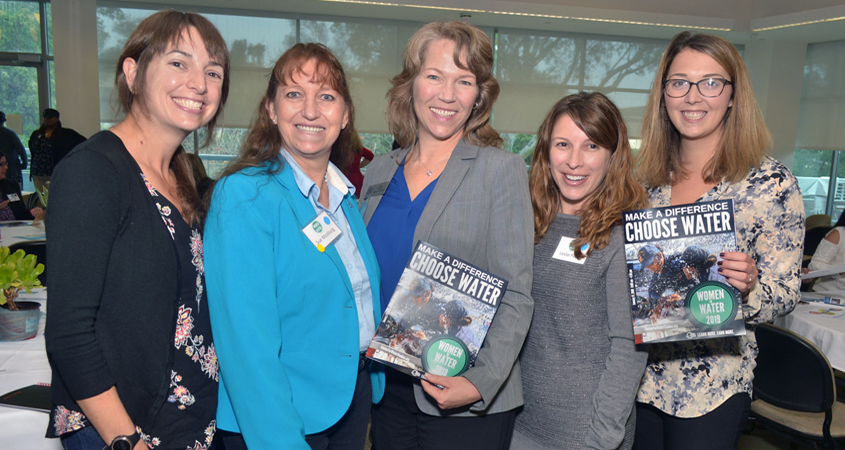 The Women in Water Symposium’s goal is to create a community of people with the interest and aptitude to take on what were previously considered non-traditional careers. Photo: Cuyamaca College

For the first time, the Women in Water Symposium will have three tracks: sessions for those interested in starting their career in water; those seeking career advancement; and established professionals interested in forming professional alliances and promoting workforce diversity.

“We all have a vested interest in water,” said Murrell. “We cannot function without it. It’s vital for us to take part in maintaining this crucial resource.”

“It is good for anyone to attend, regardless of gender,” she said. “There is a lot you can learn from being in the room with the individuals and taking it all in. The energy has been amazing at the last conferences. This conference promotes the best of the industry.”

Passing the baton to the next generation of water workforce professionals 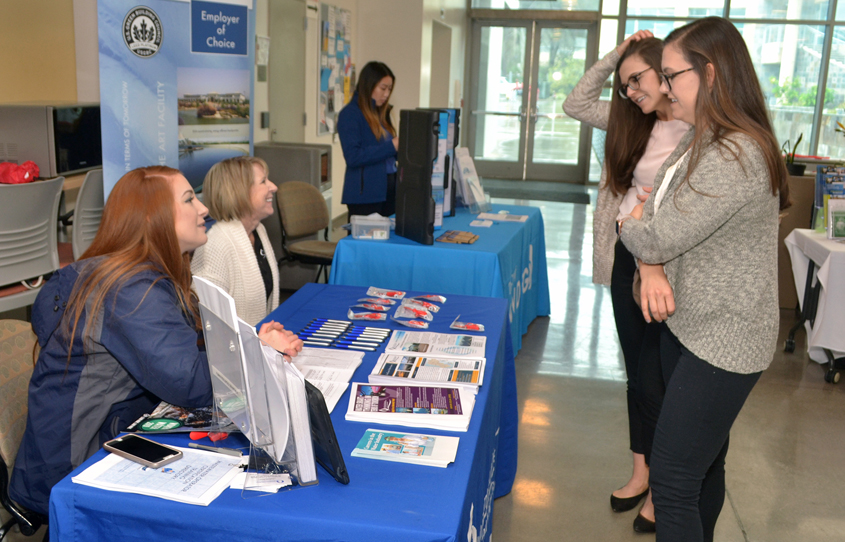 Water and wastewater industry employers including the San Diego County Water Authority will participate in the Women in Water Symposium at Cuyamaca College on January 16. Photo: Cuyamaca College

The San Diego County Water Authority will be among the water industry employers offering career information at the conference.

“There are approximately 4,500 water and wastewater positions in the San Diego region and more than 1,400 of those workers are expected to reach retirement age by 2024,” said Gretchen Spaniol, acting special projects manager with the San Diego County Water Authority. “Those retirements provide an opportunity to diversify the water industry workforce, and the Women in Water conference is a great starting place to explore careers in water.”

The series of workshops between 8 a.m. and 3 p.m. wraps up with a tour of the Water Conversation Garden.

Lunch, refreshments, and parking are included in the $35 registration fee. Registration is free for students. For more information about the symposium and Cuyamaca College’s Center for Water Studies, go to centerforwaterstudies.org. 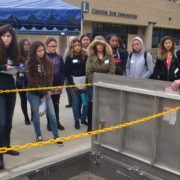 A flood of water industry professionals nearing retirement has prompted local agencies to form a task force charged with assessing ways to develop the water workforce of the future. Education leaders are stepping up outreach to fill their career training programs, and water agencies are looking for new ways to attract employees.

“For many years now, we’ve been talking about the ‘Silver Tsunami’ of aging baby boomers who are going to be leaving the workforce, but it really is coming to fruition now,” said Don Jones, who helped spearhead Cuyamaca College’s new Center for Water Studies housing the college’s Water & Wastewater Technology program. “Almost one-third of water industry professionals will be at or nearing retirement age in the next few years. When you combine that with the fact that the unemployment rate is already at record or near-record lows and other industries are facing the same challenges and going after the same people we are, we have some serious work to do.”

Those concerns have spurred the San Diego County Water Authority and other agencies to convene a regional task force comprising utility directors and general managers, which has been meeting for months to assess workforce-related challenges, collect and analyze employment data, and craft a plan for moving forward. 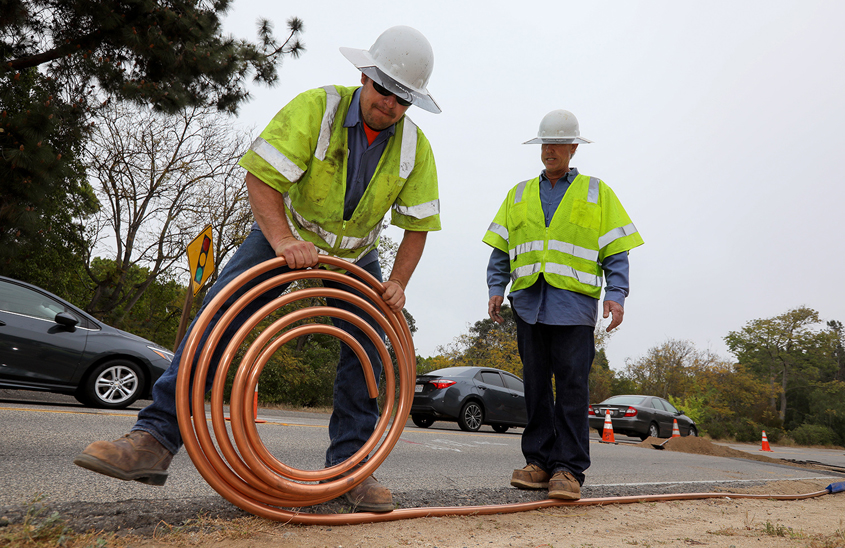 The regional water and wastewater industry expects to need to fill approximately 400 positions annually to keep pace with retirements and vacancies caused by employees leaving the area.

The challenges face both large and small agencies. In the City of San Diego, 640 of approximately 1,600 water industry professionals will be eligible to retire within the next three to four years. At the Fallbrook Public Utility District approximately 40 percent of the agency’s 68 employees will be eligible to retire within five years. Seventeen percent are currently eligible for retirement.

“These are good-paying jobs with good benefits, but you just don’t find a lot of people coming out of school who are interested, and we are struggling to attract skilled employees from the private sector,” said Jack Bebee, Fallbrook general manager.

Bebee pointed to the recent posting of a senior engineering position at the utility that pays an annual salary of close to $150,000. The district thought the salary would be competitive enough to draw people from the private sector, but only one of four applicants was from the private sector. When Bebee was hired for a similar position nine years ago, he competed against 40 other applicants.

A 2018 Brookings Institution report notes the employment void exists even though water workforce occupations not only pay more on average compared to all occupations nationally, but also pay up to 50 percent more to workers at the lower ends of the income scale. In San Diego County, water and wastewater plant and systems operators are earning an average salary of $70,000 annually, according to the U.S. Bureau of Labor Statistics.

While the Bureau of Labor Statistics notes that fewer people may be needed in coming years as water and wastewater plants become more automated, a skilled workforce is required to operate increasingly complex controls and systems. Some of the most advanced facilities in the world are in Southern California, including the Claude “Bud” Lewis Carlsbad Desalination Plant, the naton’s largest desalination plant.

Local educational efforts in the industry are addressing the potential worker shortage:

The Brookings report noted the glut of retirements offers an opportunity to diversify the industry. In January, the Center for Water Studies held the first in an annual series of Women in Water symposiums, attracting several hundred women and high school girls from throughout Southern California interested in a new career.

“Challenges can prompt people to get together and look at new ways of doing things,” said Greg Thomas, general manager at the Rincon del Diablo Municipal Water District in Escondido. “This is a great industry, it pays well, and you’re doing something good for people and society.”

#ICYMI yesterday was #DamSafetyDay! Check out this video explaining how our ... #waterpros routinely inspect and monitor our dams to ensure safety. https://twitter.com/SweetwaterAuth/status/1002277809132220416

"I pride myself in having my equipment 100% available, so with the pandemic Vallecitos is doing a rotating schedule to help with distancing and safeguarding the crews," said Dale Austin, Vallecitos Water District Senior Pump & Motor Tech ... see moresee less