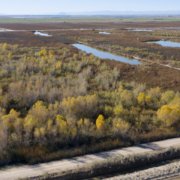 The planting is part of  the final construction phase of the Managed Marsh, located off Highway 111 between the city of Calipatria and Niland.

Funded by the Quantification Settlement Agreement Joint Powers Authority (QSA JPA), the habitat, located close to the Salton Sea, is a key environmental mitigation project to serve the needs of wildlife that depend on area surface drains in the Imperial Valley. With the planting of the 9,000 trees now underway, the Managed Marsh will be completed by early 2022.

Formed under 2003 legislation to administer the funding of environmental mitigation requirements related to the QSA water transfers, the QSA JPA is comprised of the Imperial Irrigation District, San Diego County Water Authority, Coachella Valley Water District and California Department of Fish and Wildlife.

As part of the legislation (specifically Senate Bill (SB) 654), the three water agencies of the QSA JPA have a responsibility to fund environmental mitigation projects related to the QSA up to $133 million in 2003 dollars (or $288 million in nominal dollars). The state has the responsibility to cover mitigation costs that exceed the $133 million mark and to address the larger issue of restoration at the Salton Sea. However, the three water agencies also have paid a combined $30 million in 2003 dollars (or $67 million in nominal dollars) as seed money for restoration, which was provided to CDFW as part of the Salton Sea Restoration Fund.

The Managed Marsh, built by IID as the implementing arm of the QSA JPA, was funded as part of the $133 million covered by the three water agencies. The project has been constructed over three phases, each 300 acres of marsh, with phase one completed in 2009 in and phase two in 2014. Phase three, the final stage, began last year when as many as 6,000 trees were planted. In total, once the Managed Marsh is completed, the entire facility will consist of more than 17,000 trees as well as wetlands, providing a habitat for more than 60 species of birds and other wildlife.

For years, the Managed Marsh has been open to the public, providing a resource for bird-watching enthusiasts and trail hikers. The facility also is an educational resource for area schools that have used the facility for field trips.

Since the QSA JPA was formed, it has been actively implementing mitigation projects in line with the QSA’s environmental permits, with much of that effort focused on the Salton Sea. For the first 15 years, the QSA JPA funded a fallowing program in the Imperial Valley that provided about 800,000 acre-feet of water to the Salton Sea, both to maintain salinity levels and to give the state time to begin a restoration program. At the same time, the QSA JPA implemented additional projects, like the Managed Marsh, in its ongoing efforts to address environmental mitigation.

Along with working toward the completion of the Managed Marsh, since 2018, the QSA JPA has focused on providing more permanent on-the-ground projects at the Sea, meant to address air quality impacts, including completing nearly 3,000 acres of surfacing roughening projects, with another 7,000 acres in development, growing vegetation, and supporting the reclamation of exposed playa for agricultural development where possible.

The QSA JPA will also be funding a groundwater pilot project as a potential water source for habitat development at the Salton Sea. While separate from the state’s Salton Sea Management Program, these are projects that work hand in hand with restoration in a collaborative effort.

For decades, it was a source of drinking water for the San Marcos area. Today, the South Lake Reservoir has new life as a local wildlife habitat.

South Lake was built with an earthen dam and provided drinking water to the Lake San Marcos area, most of downtown San Marcos, and the Coronado Hills area. Updates to potable water treatment had detrimental effects on the lake ecology, so the Vallecitos Water District stopped using the lake as a drinking water source in 1984, although it remained an emergency water supply for another decade. 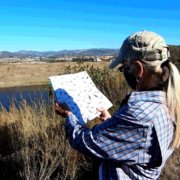 For decades, it was a source of drinking water for the San Marcos area. Today, the South Lake Reservoir has new life as a local wildlife habitat.

South Lake was built with an earthen dam and provided drinking water to the Lake San Marcos area, most of downtown San Marcos, and the Coronado Hills area. Updates to potable water treatment had detrimental effects on the lake ecology, so the Vallecitos Water District stopped using the lake as a drinking water source in 1984, although it remained an emergency water supply for another decade. 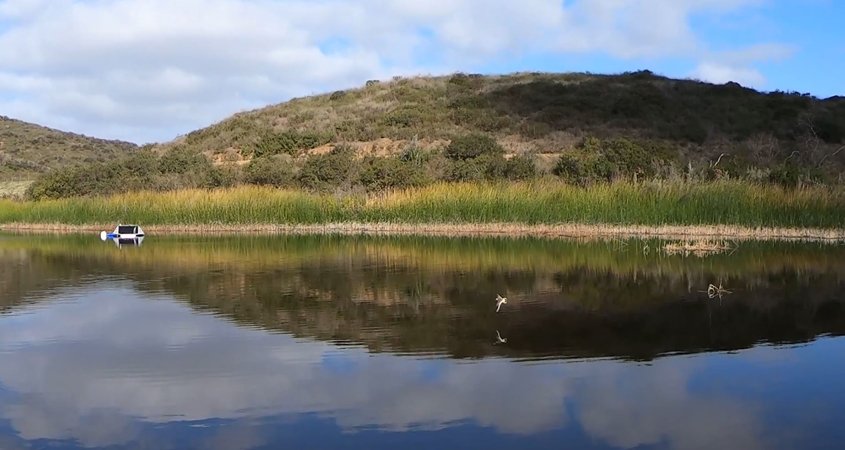 Now, South Lake provides a thriving ecosystem within and around the facility. The lake is home to freshwater fish and abundant aquatic plant life. Waterfowl such as coots, gallinules, grebes, various species of ducks, and cormorants frequent the lake throughout the year. The property is filled with quail, doves, deer, rabbits, raccoons, skunks, squirrels, bobcats, and coyotes.

Vallecitos Water District staff recently surveyed the area to look for animal tracks and other signs of wildlife, and to catalog plant and animal species. 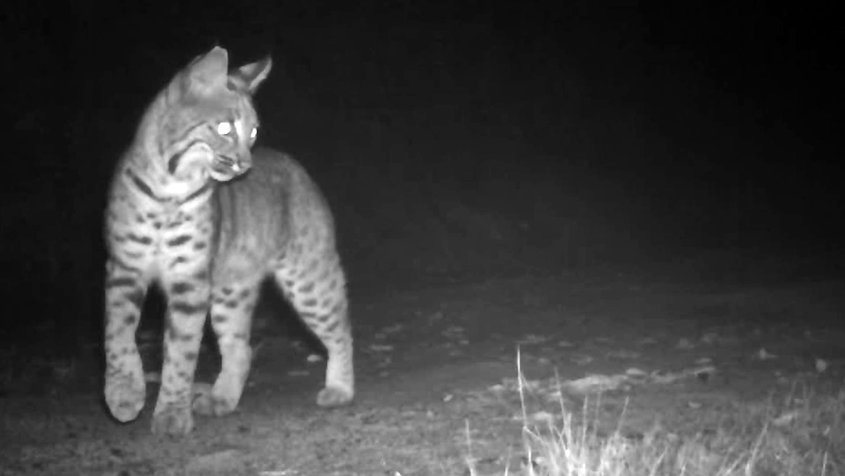 Two wildlife cameras were set up at South Lake to capture wildlife activity over a two-week period. Lisa Urabe, a University of California trained Master Gardener and Vallecitos public information representative, asked the Buena Vista Audubon Society to conduct a bird survey. The BVAS volunteers identified 36 species in mid-February and created a YouTube video showcasing some of the species.

BVAS volunteers were enthusiastic about surveying the birds in an area set aside as wildlife habitat. With increased habitat fragmentation, BVAS hopes the area will remain primarily an area for wildlife. 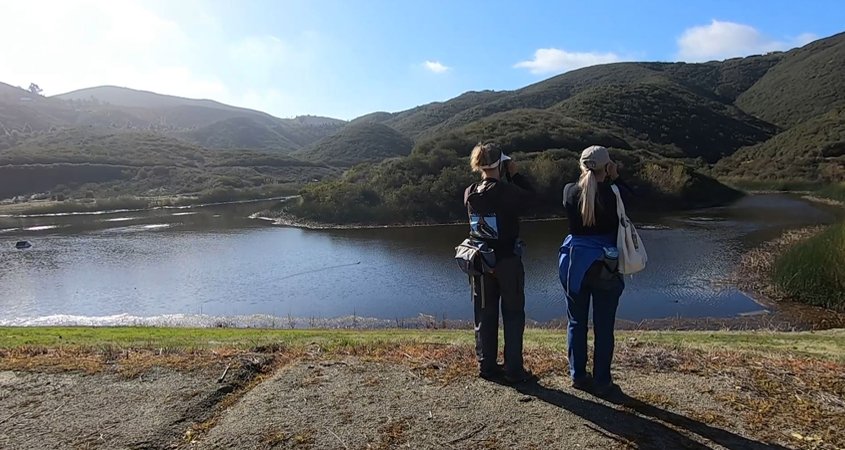 “What you have at South Lake is a gem of the healthy functioning habitat— flora, fauna, and it is just a complete picture of what we hope our open spaces and natural lands to be,” said Karen Merrill. “It is something we should treasure now and into the future. It is one of a kind here on coastal San Diego County.”

Vallecitos employees take pride in the lake and its surrounding ecosystem and strive to keep the habitat intact for generations to come. 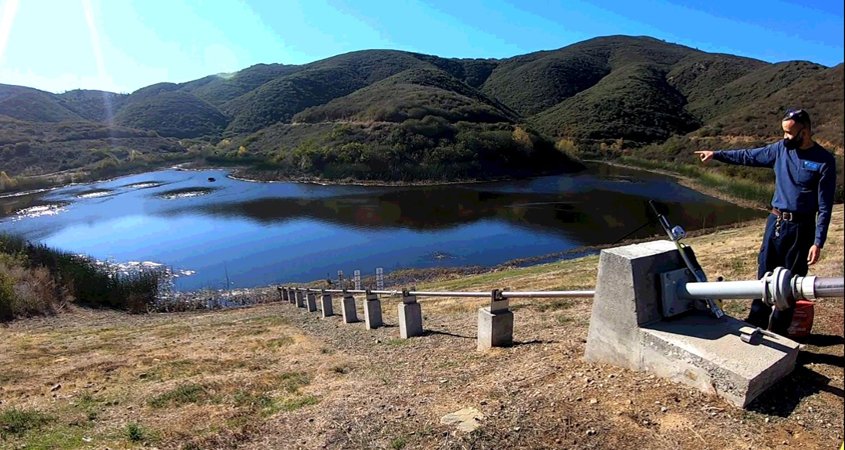 Firefighting helicopters can pull water from the lake

In addition to its value as local wildlife habitat, South Lake is available for fire suppression. Firefighting helicopters can pull water from the lake during wildfire events. The lake may be used as part of the City of San Marcos’ park system in the future.

Water quality within South Lake is monitored daily by water distribution operators, and the condition of the dam’s integrity is recorded weekly. Recently, an environmentally-sound ultrasonic technology made by LG Sonic was placed on the lake to reduce algae blooms and to improve water quality.

On a warm, sunny afternoon in late November, Roger Cornwell stopped his pickup near the edge of a harvested rice field to avoid spooking a great blue heron standing still as a statute, alert for prey. He pointed to a dozen or so great egrets at the opposite end of the field as a chorus of killdeer sang a high lonesome tune in the distance.

Down to its final weeks, the Trump administration is working to push through dozens of environmental rollbacks that could weaken century-old protections for migratory birds, expand Arctic drilling and hamstring future regulation of public health threats.

The Colorado River millennial mega-drought continues, despite robust snowpack last winter. Above-average temperatures in spring resulted in a paltry 57% runoff, nowhere near enough water to refill the reservoirs that remain half-empty. Based on these conditions, the U.S. Bureau of Reclamation recently determined that 2021 will be a “tier zero” year under the Lower Colorado River Basin Drought Contingency Plan, with reduced water deliveries for Arizona, Nevada, and Mexico.

The Salton Sea in California’s far southeast corner has challenged policymakers and local agencies alike to save the desert lake – a vital stop for migrating birds – from becoming a fetid, hyper-saline water body inhospitable to wildlife and a source of choking dust. The state of California, long derided for its failure to act in the past, says it is now moving full-bore to address the sea’s problems, with ambitious plans for wildlife habitat and dust suppression. Skeptics say addressing the sea’s issues is vital not only for the sea and surrounding communities, but for management of the Colorado River as well.

The Trump administration has rolled back dozens of long-standing environmental protections. Now California is trying a new tack: Writing its own rules. 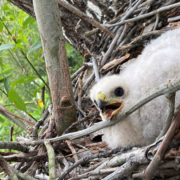