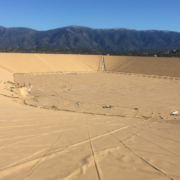 The Valley Center Municipal Water District has been advised by the California State Water Resources Control Board that its Cool Valley Reservoir Cover Replacement Project was recognized by the Environmental Protection Agency’s new AQUARIUS Program as an “Exceptional Project,” among only 10 identified as such nationwide.

Each year, EPA’s Aquarius Program recognizes one Drinking Water State Revolving Fund project from each of its 10 regions nationwide for “exceptional focus on sustainability, protection of public health” while demonstrating a high level of innovation.

The $4.2 million Cool Valley Reservoir Cover Project was nominated by the SWRCB, EPA’s state-level partner in the DWSRF Program in California.

Constructed in 1975 and with the original floating flexible reinforced “Hypalon” material installed in 1992, Cool Valley is Valley Center’s largest drinking water reservoir with a capacity of 57 million gallons, providing about 40% of the District’s total covered drinking water storage capacity. By 2015, the floating cover had reached its full life expectancy and started to experience failures, possibly placing the quality of the water in the reservoir at risk.

At that point the decision was made to take the reservoir out of service and seek DWSRF financing to cover the estimated $4.2 million project cost, rather than make additional repairs to the existing liner.

District engineering staff and consultants were successful in securing the 20-year loan at 1.6% interest. With the loan secured, the project was approved by the Valley Center Board in the FY 2015/2016 Budget.  The project took 12 months to complete and was back on line by mid-2017. The effort was overseen by Wally Grabbe, District Engineer and managed by Dennis Williams (retired), Deputy District Engineer.

In making the award, the SWRCB and EPA noted that the Valley Center Cool Valley Project will not only protect water quality from atmospheric vectors, but the new cover-liner will “prevent leakage from the reservoir, reduce bacteria by creating a barrier between the drinking water and the concrete liner… and reduce chemical and energy use.

During the same period of time, the Valley District designed and installed a 95kW Photovoltaic Solar Array and upgraded the Cool Valley Pump Station, all located on the Cool Valley Reservoir site.

Unlike the current, temporary program, the new program will let new participants join as a way to strengthen the region’s multi-billion-dollar agriculture industry.

Tijuana and Rosarito residents may have gotten a brief reprieve from scheduled water shut-offs, but the delivery of water throughout Baja California is a vulnerable system in need of urgent repairs, state and water officials stressed this week.
Like San Diego, Tijuana gets most of its water supply — at least 95 percent — from the Colorado River. It’s delivered through a single aqueduct that carries the water all the way across the state, including up and over La Rumorosa, a mountain pass more than 4,000 feet above sea level.

Several storms have barreled across much of California since before Thanksgiving. But now, a shift in the weather pattern looks to bring calmer weather.

Storm after storm dove across the state over the past several weeks, delivering rain, wind and mountain snow.

The jet stream, which helps to influence the track storm systems take, was a big part of the reason for the recent storminess.

The meeting last June in a wood-beamed barn in Newburg, Md., an hour due south of Washington, had all the makings of a secret conclave. The guest list was confidential. No press accounts were allowed. The topic was how to pivot American agriculture to help combat climate change — an issue so politically toxic that the current administration routinely shies away from promoting crucial government research on the issue.

But this meeting represented a change. It was hosted by the U.S. Farmers and Ranchers Alliance, a group made up of the heavyweights in American agriculture. It brought together three secretaries of agriculture, including the current one, Sonny Perdue, among an A-list of about 100 leaders that included the president of the American Farm Bureau Federation — a longtime, powerful foe of federal action on climate — and CEOs of major food companies, green groups and anti-hunger advocates.

The combination of pumped hydro with other storage technologies can increase renewables penetration, improve operational safety and reduce maintenance costs at large-scale hydropower plants, according to new research. The study also focuses on techniques to determine the optimal size of renewables-based pumped hydro storage systems.

Pumped hydro is highly cost competitive as a large-scale energy storage solution, according to a recent report by the San Diego County Water Authority. The higher capital costs of pumped storage technology versus battery storage are outweighed by the longer lifetime of pumped storage, which gives it a lower levelized cost, the authority said.

It came as a bittersweet surprise to biologists and government agencies monitoring the steadily shrinking Salton Sea’s slide toward death by choking dust storms and salt.

Thousands of acres of exposed lake bed have become, of all things, the unintended beneficiaries of lush marshlands that are homes for endangered birds and fish at the outlets of agricultural and urban runoff that used to flow directly into the Salton Sea.