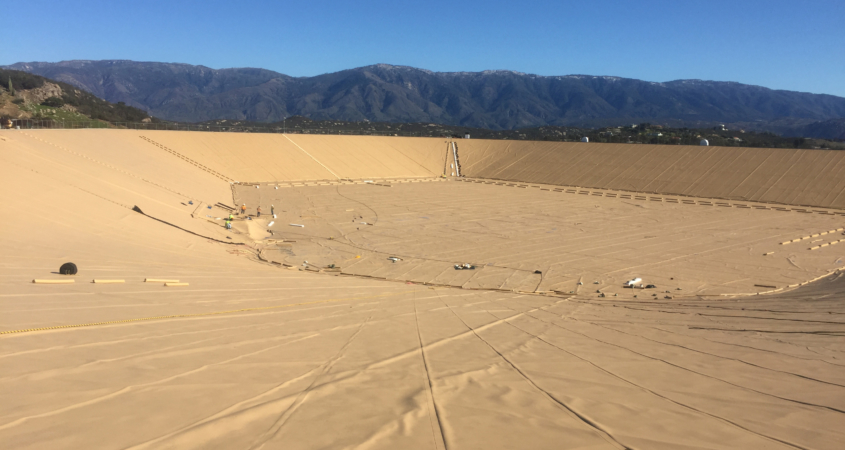 The $4.2 million Cool Valley Reservoir Cover Project was recognized by the U.S. EPA as an "Exceptional Project" for its focus on sustainability and protection of public health, and for its innovation. Photo: Valley Center Municipal Water District (May 2017)

The Valley Center Municipal Water District has been advised by the California State Water Resources Control Board that its Cool Valley Reservoir Cover Replacement Project was recognized by the Environmental Protection Agency’s new AQUARIUS Program as an “Exceptional Project,” among only 10 identified as such nationwide.

Each year, EPA’s Aquarius Program recognizes one Drinking Water State Revolving Fund project from each of its 10 regions nationwide for “exceptional focus on sustainability, protection of public health” while demonstrating a high level of innovation.

The $4.2 million Cool Valley Reservoir Cover Project was nominated by the SWRCB, EPA’s state-level partner in the DWSRF Program in California.

Constructed in 1975 and with the original floating flexible reinforced “Hypalon” material installed in 1992, Cool Valley is Valley Center’s largest drinking water reservoir with a capacity of 57 million gallons, providing about 40% of the District’s total covered drinking water storage capacity. By 2015, the floating cover had reached its full life expectancy and started to experience failures, possibly placing the quality of the water in the reservoir at risk.

At that point the decision was made to take the reservoir out of service and seek DWSRF financing to cover the estimated $4.2 million project cost, rather than make additional repairs to the existing liner.

District engineering staff and consultants were successful in securing the 20-year loan at 1.6% interest. With the loan secured, the project was approved by the Valley Center Board in the FY 2015/2016 Budget.  The project took 12 months to complete and was back on line by mid-2017. The effort was overseen by Wally Grabbe, District Engineer and managed by Dennis Williams (retired), Deputy District Engineer.

In making the award, the SWRCB and EPA noted that the Valley Center Cool Valley Project will not only protect water quality from atmospheric vectors, but the new cover-liner will “prevent leakage from the reservoir, reduce bacteria by creating a barrier between the drinking water and the concrete liner… and reduce chemical and energy use.

During the same period of time, the Valley District designed and installed a 95kW Photovoltaic Solar Array and upgraded the Cool Valley Pump Station, all located on the Cool Valley Reservoir site.

"The water supply is free of #coronavirus because the water is heavily treated ... and monitored."

Thanks to @CBS8 Reporter @LemorAbrams for reporting how the @sdcwa & its 24 member agencies ensure a safe, secure and reliable water supply.

The San Diego County Water Authority is joining regional efforts to fight the ... economic impacts of the #coronavirus pandemic by setting up a virtual food drive in partnership with the San Diego Food Bank. https://bit.ly/2UGmY1s #COVID19 #NeighborsHelpingNeighbors @SDFoodBank

According to the @EPA, America’s drinking water supplies remain a safe and ... affordable way to access the water needed for drinking, cooking and maintaining personal hygiene during the #COVID19 outbreak.
https://www.waternewsnetwork.com/?p=59585

"The water supply is free of coronavirus because the water is heavily treated and monitored."

Thanks to CBS8 Reporter Lemor Abrams for reporting how the Water Authority and its 24 member agencies ensure a safe, secure, and reliable water supply.

Thank you to our water pros who keep the water flowing! They are critical to the operation and maintenance of key water infrastructure and continue to work and conduct normal job functions while complying with enhanced safety precautions such as social distancing measures.