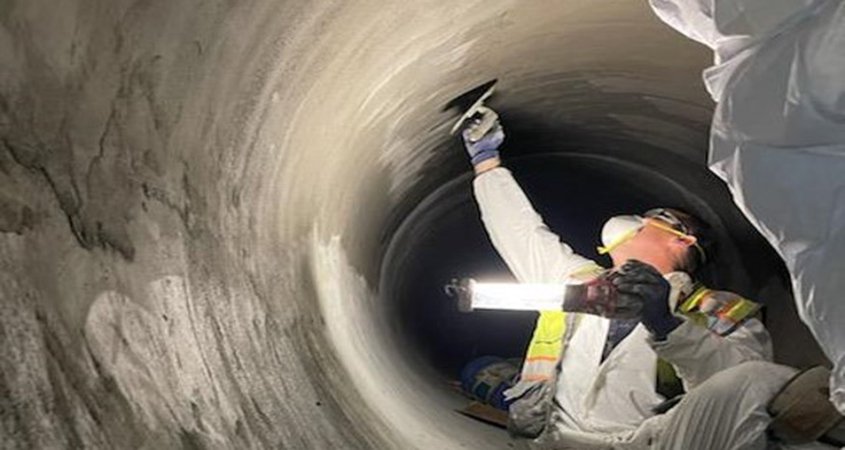 San Diego County Water Authority Operations and Maintenance staff recently completed a complex relining project on a section of Pipeline 3 in central San Diego, within Mission Trails Regional Park. Pipeline 3 traverses the western portion of the region from the Riverside County border in the north to Lower Otay Reservoir in the south.

Large-diameter pipelines operated by the Water Authority and its 24 member agencies extend approximately 310 miles to convey water throughout the region.

By relining pipes ahead of time or conducting timely repairs, the Water Authority and its member agencies avoid pipeline failures and improve the reliability of future water supplies. The proactive Pipeline 3 relining project is part of the asset management program to make preventative repairs to large-scale infrastructure.

In June 2020, O&M staff performed an inspection of Pipelines 3 and 4 within Mission Trails Park during a routine shutdown. They inspected an area of Pipeline 4 that had previously been repaired, and the repairs were found to have held up successfully. Pipeline 3 has similar characteristics to Pipeline 4 in that area, and during the shutdown, staff inspected and found a 32-foot section of pipeline that had sustained lining damage. Between August and September 2021, staff completed the complex repairs on Pipeline 3.

“The project was challenging due to several geographical factors, including the distance of access structures from the damaged section and the steep grade of the hill that the section of pipeline traverses,” said David Hernandez, maintenance technician at the Water Authority. “Our asset management, facility maintenance, and mechanical maintenance teams collaborated closely to plan and execute the complex repairs.”

To begin the relining project, heavy concrete covers at access point structures were first removed to allow staff to access the pipeline. Piping and an air valve at the top and pumping well at the bottom of the hill were then removed to allow for safe access. Staff installed an atmospheric ventilation fan that moved fresh air into the pipeline. Once the piping and valves were removed, they were able to enter the pipeline.

Staff then hiked through the pipeline to perform a visual inspection and locate the damaged area. They located the broken lining section and loaded broken pieces into buckets and manually hauled the buckets to access structures. Then the metal pipeline was prepared for the application of new liner. Preparation of the pipe took several days – it involved carefully cutting out any remaining damaged liner, descaling rust from the metal, and cleaning up and wiping down the metal to prepare for new lining. O&M staff then mixed the new lining material – approximately 4,400 pounds of dry material was mixed and lifted over the course of the project. The new liner was then manually applied to the pipe, starting from the bottom half for traction and then applied up to the crown of the pipe. Finally, every inch of the new lining was carefully inspected.

The highly specialized work effort was performed in a safe and efficient manner due to careful planning and execution by the Water Authority’s O&M staff. Throughout the process, staff took multiple safety measures, including wearing personal protective equipment, having a confined space rescue team on standby, and tying hand and foot loops into a safety rope. The entire project took approximately one month. It will extend the lifetime of Pipeline 3, a crucial component to the region’s water supply.

The San Diego County Water Authority is one of the 100 pit stops for today's SANDAG Bike to Work Day. Stop by our Kearny Mesa office between 6 a.m. and 9 a.m. to pick up a free t-shirt and snacks. Registration required to receive free T-shirt: bit.ly/37XjkuN ... see moresee less