“As we face another year of drought and the growing impacts of climate change on our water supply, having experienced problem-solvers like Fern on the California Water Commission is more important than ever,” Atkins said in a statement.

Steiner, an employment lawyer, is on the San Diego County Water Authority’s board and serves as a trustee for San Diego Youth Services. Her appointment now goes to the full Senate for confirmation.

I didn’t see the ocean until I was 18 years old. That late start didn’t stop me from falling in love with the sea, a love I have pursued in earnest ever since I moved to San Diego.

Here in our community, and in communities throughout California, warming waters and rising sea levels threaten both the coast we love and the people and businesses that are located there. Predictions are, that left unchecked, sea level rise will cause billions of dollars in damage in California and disrupt countless lives. 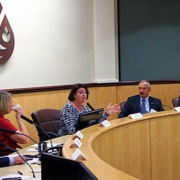 Atkins has represented the region since 2000, serving on the San Diego City Council for eight years and in the state Assembly for six years. She was elected to the state Senate in 2016, where she represents the 39th district. The district includes most of the city of San Diego, and Coronado, Del Mar, and Solana Beach. She was elected Senate President pro Tem by her senate colleagues in March 2018.

Throughout her years of public service in state and local government, Atkins has championed sound water policy. She is currently in the middle of coronavirus pandemic-related public safety and economic recovery issues. Atkins received the 2019 Safe Drinking Water Champion Award in January 2020 from the California Municipal Utilities Association in Sacramento.

As leader of the Senate, Atkins was instrumental in bringing California together to find consensus that resulted in passage of the Safe and Affordable Drinking Water Fund of 2019. The long-term funding solution avoided a proposed water tax, ensures safe drinking water for an estimated one-million Californians, and will fix failing water systems in vulnerable communities.

Legislative partnerships are essential for a prosperous future

Over the years, the Water Authority has hosted numerous legislative roundtable events to promote collaboration with civic, business, and elected leaders to ensure continued water supply reliability for the region.

The senate plans include funding to create jobs, boost infrastructure investments and to protect renters and landlords.

“We are very appreciative of President pro Tem Toni Atkins’ efforts to advance immediate action on economic recovery and creative solutions to jump-start California’s economy without exacerbating the already-challenging fiscal conditions being experienced at the state and local government levels,” Madaffer said. “We look forward to engaging on the details and partnering with the state to move forward on shovel-ready water and energy infrastructure projects that can help the state’s economic recovery gain traction.”