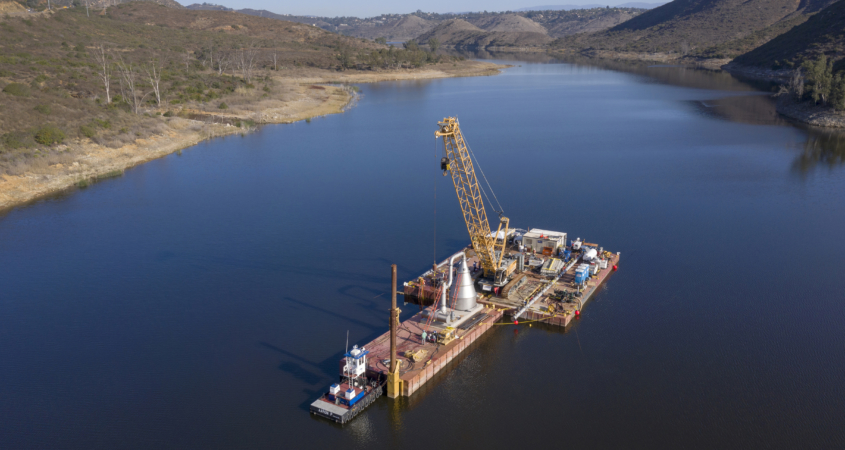 Crews loaded the 130,000 pound stainless steel cone onto a barge and finished assembling it above water before lowering it into the reservoir. Photo: Water Authority

The increase of nutrients and algae in the water has been caused by human activities in the watershed upstream of the reservoir, including residential and commercial development, agriculture, and land clearing. Degraded water quality can restrict the ability to move water in and out of the reservoir.

“The ‘Speece cone’ is a fairly unique method for adding oxygen to a reservoir – there are only a few of them in the world,” said Jeff Pasek, project manager at the City of San Diego Public Utilities Department. “This project derived from a planning study that was done about five years ago, which identified oxygenation using the ‘Speece cone’ as being the most cost-effective way of addressing the water quality problems in Hodges.”

Last week, the 130,000 pound cone – named after the inventor of the technology, Richard Speece – was lowered eighty feet to the bottom of the reservoir.

The precisely coordinated operation involved lifting the 20-foot tall stainless steel cone with a large crane, while simultaneously driving a barge out from underneath. Once the cone was lowered into the water, divers headed to the bottom of the reservoir to unhook the cone from the crane, check to make sure it settled in the correct spot, and fasten it down.

In order to build a solid foundation underwater, crews excavated approximately 11 feet of silt from the bottom of the reservoir and constructed a concrete base. Before submerging the cone, crews installed and tested a pump that will move water through the cone. A large diffuser pipe was then lowered and connected to the cone by divers. The diffuser will distribute the oxygen-rich water throughout the reservoir. 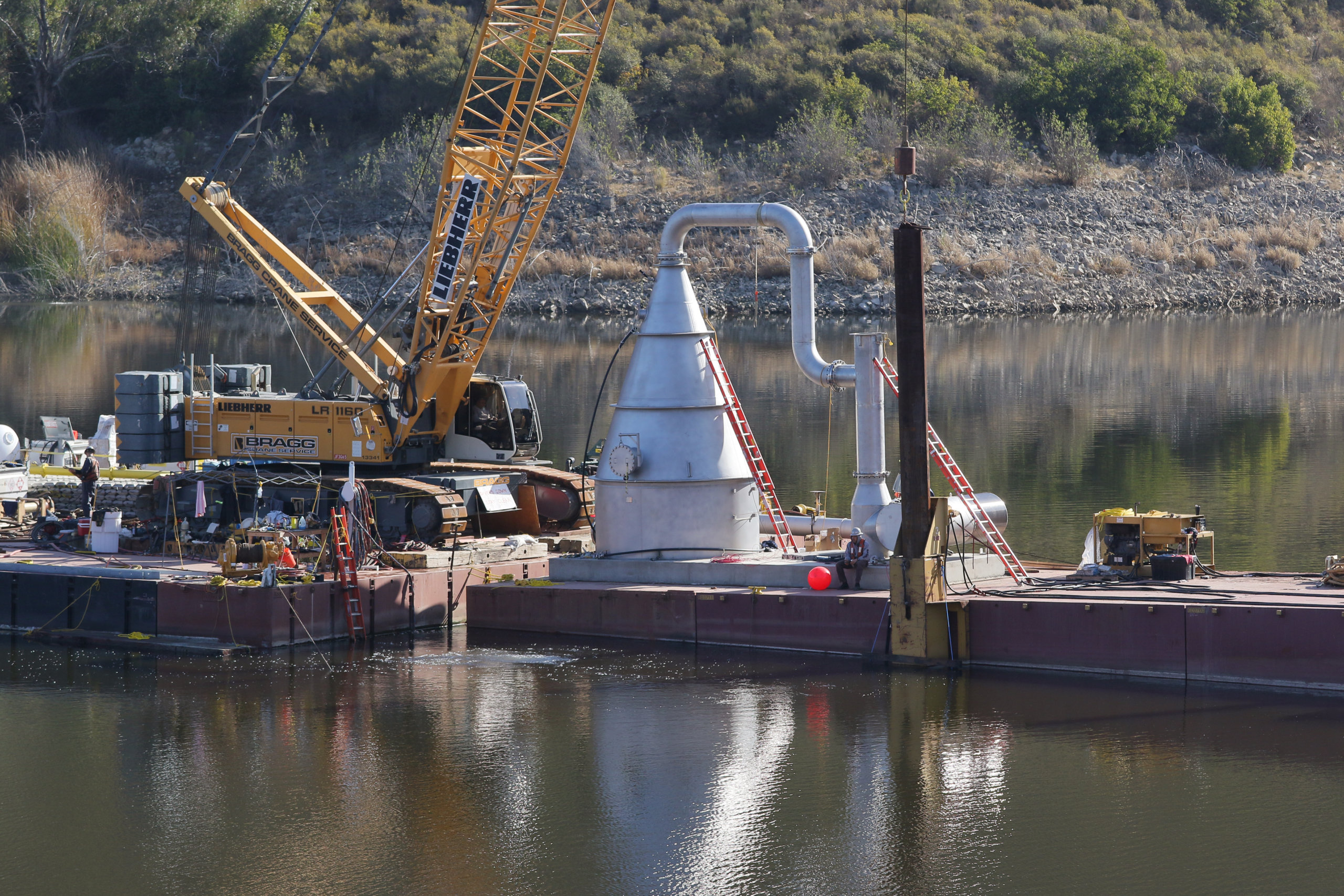 Now underwater, the cone will distribute oxygen-rich water throughout the reservoir to reduce the accumulation of excess nutrients and prevent harmful algae growth. Photo: Water Authority

Hodges Reservoir is owned and operated by the City of San Diego, and it serves the San Dieguito Water District and the Santa Fe Irrigation District. It is connected to the San Diego County Water Authority’s Olivenhain Reservoir as part of the Emergency & Carryover Storage Project, which is designed to ensure regional water reliability in case of emergencies or if the region is cut off from imported water supplies.

“There are multiple benefits to this project – first and foremost being the water quality improvements for Hodges Reservoir,” said Goldamer Herbon, a senior water resources specialist at the Water Authority. “Ancillary benefits include operational flexibility for regional supply benefits and preventing the accumulation of mercury, which can be harmful to people and wildlife that eat fish from the reservoir.”

The California State Department of Water Resources awarded the City of San Diego a $3.4 million grant funded by the San Diego Integrated Regional Water Management program to complete the oxygenation project, which began in February 2019.

"Use a layer of mulch to prevent water loss and insulate landscapes during ... colder weather."
Winter weather is a great time to get your mulch going! https://bit.ly/3caQfvL #cawater #cawx #DIY #mulching

For a limited time, @solanacenter is offering rain barrels at a discounted price... for all San Diego County residents!

Order online at http://solanacenter.org/rain-barrels and pick up from Encinitas, Bonita (1/30) or Lakeside (2/6).