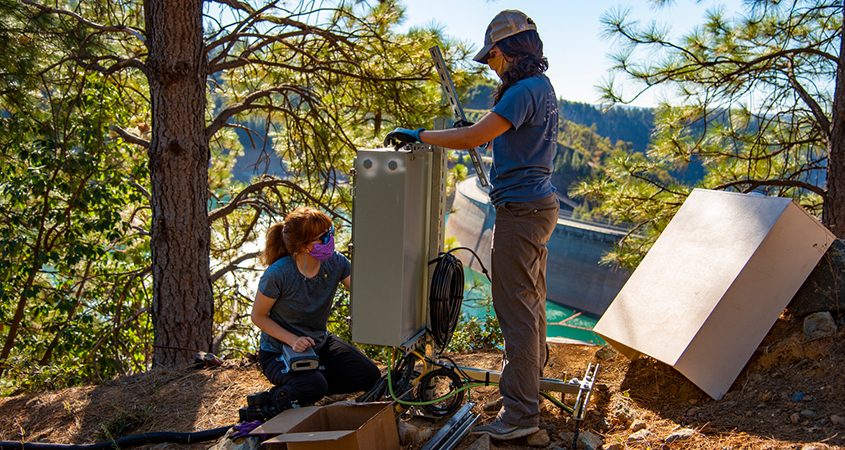 The aircraft will fly for a 13-week period (that began January 5) to glean critical data for improving forecasts of atmospheric river storms over the Pacific Ocean. Those storms, or “AR’s,” provide up to half of the U.S. West Coast’s annual precipitation and a majority of the flooding.

The flights are part of the Atmospheric River Reconnaissance program led by UC San Diego’s Center for Western Weather and Water Extremes (at Scripps Institution of Oceanography) with support from the U.S. Army Corps of Engineers and California Department of Water Resources. The AR Recon program works in coordination with NOAA’s Office of Marine and Aviation Operations and the U.S. Air Force Reserve 53rd Weather Reconnaissance Squadron “Hurricane Hunters” to carry out data-collecting missions within these storms.

Two Air Force Reserve WC-130J Super Hercules aircraft are on standby to fly out of Mather Air Force Base near Sacramento, when atmospheric rivers approach the West Coast.  NOAA will station its Gulfstream IV-SP jet in Hawaii during this year’s operations.

Dropsonde instruments will be deployed from these aircraft over specialized transects over atmospheric rivers, transmitting critical data on the vertical profile of water vapor, wind, and temperature carried in fast-moving, low-altitude airstreams that form the atmospheric river.

The San Diego County Water Authority is a partner with the Scripps Institution of Oceanography, Center for Western Weather and Water Extremes, at UC San Diego, as part of the effort to better predict atmospheric rivers and improve water management before, during, and after those seasonal storms. The partnership started in 2020.

An average atmospheric river carries 25 times the water equivalent of the Mississippi River in the form of vapor instead of liquid. These storms can cover a swath about 500 miles wide while extending thousands of miles in length. They pack winds ranging from more than 50 miles an hour to hurricane force.

“Science has discovered that the leading source of error in predicting when and where an atmospheric river will strike the U.S. West Coast, and how much precipitation it will create, is the position and structure of the atmospheric river itself offshore, prior to landfall,” said Scripps research meteorologist and CW3E Director F. Martin Ralph. “Obtaining accurate environmental measurements in and near the atmospheric river offshore using these aircraft and drifting ocean buoys has a significant impact on forecast accuracy. AR Recon not only fills in many data gaps over the Pacific Ocean for prediction, it supports improved scientific understanding that over time improves forecasts as well. These improvements are vital for water managers and public safety.”

Atmospheric rivers have helped break more than 40% of California’s droughts throughout recorded history. They also generate many of California’s most extreme precipitation events, driving 90% of California’s heaviest rains in bursts lasting one to three days. They are also responsible for as much as $1 billion a year in flood damages in western states.

Although meteorologists can see atmospheric rivers forming as much as eight days in advance, landfall forecasts can be hundreds of miles off target. AR Recon data improves forecasts of their intensity, allowing forecasters to more precisely determine the potential benefits or hazards of atmospheric rivers. Situationally, they can refill reservoirs or bring flooding and debris flows. Real-time data will also be incorporated into AR scale rankings, which can serve as a predictive indicator of the storm’s damage or benefit. 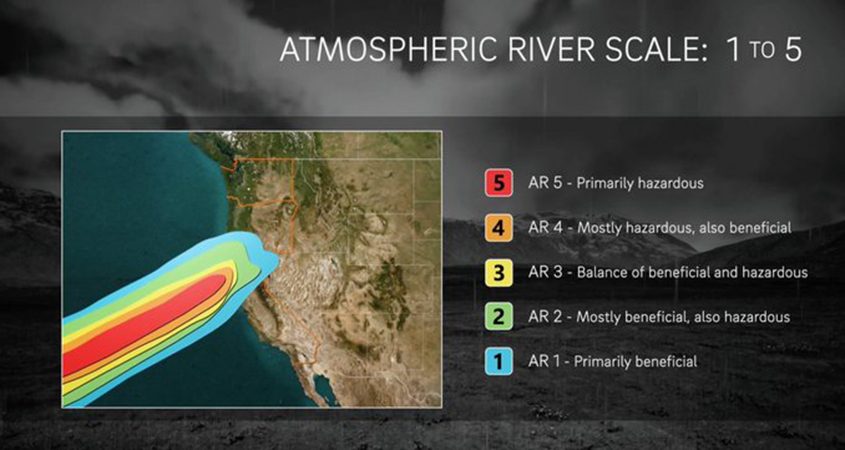 “AR Recon has been a key monitoring element of the State’s Atmospheric River Research Program and is a great example of collaborative engagements that lead to improvements in precipitation prediction, providing multiple benefits to water managers seeking to understand climate change-caused weather extremes,” said Michael Anderson, state climatologist with the California Department of Water Resources.

As California alternates between extremes of drought and flood, accurate forecasts are increasingly vital to water managers. A collaborative program called Forecast-Informed Reservoir Operations (FIRO) uses modern forecasting methods to give reservoir operators better decision-making tools to optimize water resources. FIRO is developing the capability for these advanced forecasts to help water managers decide whether to retain water if no additional storms are forecast or release it to mitigate the risk of flooding.

“Water managers within the U.S. Army Corps of Engineers have long maintained that they can do a better job of making water management decisions if weather forecasts were better – i.e. more accurate at longer lead times,” said Cary Talbot, chief of the Flood and Storm Protection Division at the U.S. Army Engineer Research and Development Center. “The AR Recon program, combined with the increased flexibility afforded by the FIRO program, is making better water management a reality in California and across the West because the forecasts are improving in both accuracy and lead time.”

AR Recon observations began in 2016. This year the mission window will expand to 13 weeks, three weeks longer than last year.

In addition to using dropsondes, the Air Force Reserves and ships of opportunity deployed 50 additional drifting buoys in key locations throughout the northeast Pacific this season, joining 48 buoys active from previous seasons. These buoys provide vital sea-level pressure, water temperature, and wave measurements from a region lacking data needed for numerical weather predictions and climate studies. The buoy deployments were completed in partnership with the Scripps-based, NOAA-funded Global Drifter Program (GDP), the California Department of Water Resources, and the U.S. Army Corps of Engineers.

Neither satellites nor other conventional observation methods can detect conditions captured from buoys and dropsondes. In offshore areas from the ground to a height of several miles, AR Recon dropsonde data account for most temperature and humidity observations and almost half of the wind observations. These data plug a serious gap in the standard network of weather observations impacting the U.S. mainland.

Weather officers and navigators of the U.S. Air Force Reserves will embed at Scripps Oceanography for flight planning this season, assisted by a team from NOAA’s Environmental Modeling Center and flight directors from NOAA’s Aircraft Operations Center. About 50 people aid flight planning throughout the season, including approximately 20 from Scripps Oceanography and up to 15 from the Air Force Reserves.

The AR Recon Program has grown from a demonstration phase in 2016 to an operational requirement in 2019 and is now included in the federal National Winter Season Operational Plan. It has expanded from flying three storm Intense Observation Periods in 2016 to 30 such periods in 2021, with more than 117 aircraft missions flown and data from more than 3,000 dropsondes assimilated in real-time operations.

Leading global weather models at NOAA and the National Weather Service, the U.S. Navy, and European agencies and others incorporate AR Recon data into their forecasts. In the northeast Pacific, AR Recon observations have improved precipitation forecasts over the western United States. They also provide a more accurate analysis of upstream atmospheric conditions before potential high-impact weather events develop over the central and eastern parts of the country.

“Real-time assimilation of AR Recon observations have made a significant impact on NOAA’s operational GFS, particularly for the precipitation forecasts along the west coast of the United States, with forecast improvements exceeding 20-30 percent in areas where heavy precipitation occurs due to landfalling atmospheric rivers,” said Vijay Tallapragada, Chief of Modeling and Data Assimilation Branch at NOAA’s Environmental Modeling Center.

The Research and Operations partnership established through the AR Recon Program has enabled scientists from NOAA working closely with CW3E and the Navy in developing advanced sampling strategies for mission planning and targeted collection of observations critical for improving the analysis and forecasts. The AR Recon observations also have notably improved key aspects of NOAA’s GFS. Wind forecasts alone have improved by 17% after including AR Recon data. The Navy has found that AR Recon data improves forecasts as much as all the data collected from balloon-borne radiosondes in North America.

The recent report from NOAA’s Science Advisory Board on Priorities for Weather Research explicitly recommended the implementation of a multi-phase program to improve atmospheric river forecasting to better anticipate and mitigate extreme precipitation swings and their cascading impacts.

In 2022, the AR Recon Program will include, for the first time, real-time data collection and feedback that can instantly impact experiments being carried out with NOAA’s GFS. Making this possible are the computational resources provided by San Diego Supercomputer Center’s “COMET” to facilitate documenting the forecast improvements and support mission planning.

(Editor’s Note: Follow the work of Scripps Institution of Oceanography scientists at the Center for Western Weather and Water Extremes on Twitter at @CW3E_Scripps, the U.S. Air Force Reserves Weather Reconnaissance Squadron at @53rdWRS, and NOAA Aircraft Operations Center at @NOAA_HurrHunter.)