It’s been a pretty dry winter in San Diego County so the rainfall in the forecast Wednesday is important to help shrink that rainfall deficit. But much rain are we talking about here?

Precipitation is below average in California for the current water year. Despite recent storms that increased the statewide Sierra Nevada snowpack to 70% of average to date, the state is experiencing its second consecutive below average year for rain and snow. 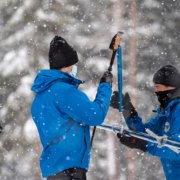 Precipitation is below average in California for the current water year. Despite recent storms that increased the statewide Sierra Nevada snowpack to 70% of average to date, the state is experiencing its second consecutive below average year for rain and snow. The water year starts on October 1 and ends September 30.

The Department of Water Resources Feb. 3 conducted the second manual snow survey of the season at Phillips Station. The manual survey recorded 63 inches of snow depth and a snow water equivalent, or SWE, of 17 inches, which is 93% of average for that location, according to the DWR. The SWE measures the amount of water contained in the snowpack and is a key component of DWR’s water supply forecast.

“The recent blast of winter weather was a welcome sight, but it was not enough to offset this winter’s dry start,” said DWR Director Karla Nemeth. “While there is still a chance we will see additional storms in the coming weeks, the Department and other state agencies are preparing for the potential for a second consecutive year of dry conditions.” 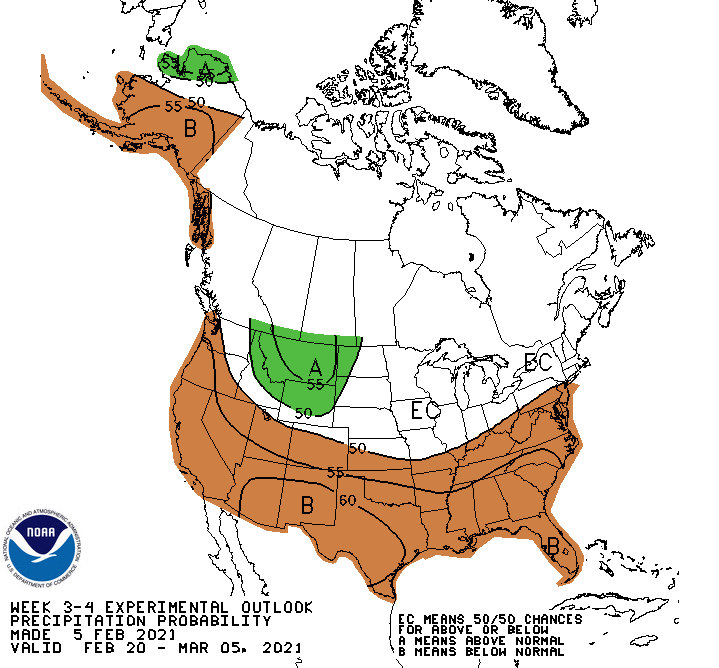 Below normal precipitation is favored throughout most of the southern tier of the United States in late February to early March, according to the National Weather Service Climate Prediction Center. La Niña conditions remain over the Pacific Ocean.

Statewide snow survey measurements reflect those dry conditions. Measurements from DWR’s electronic snow survey stations indicate that statewide the snowpack’s SWE is 12.5 inches, or 70% of the February 3 average, and 45% of the April 1 average. April 1 is typically when California’s snowpack is the deepest and has the highest SWE.

How it started.
How it's going.

Precipitation totals to date are behind historical averages for two of the main sources of San Diego County’s supply, with two months to go in the winter season but, a couple of atmospheric rivers can change that quickly.

“The San Diego region will have a plentiful and reliable source of water due to actions taken by the Water Authority and its 24 member agencies to diversify the water supply,” said Herbon. “Continuing efforts to expand supply sources, including desalination, water reuse, and recycling, will ensure that the water needs are met for the region’s 3.3 million people and its $245 billion economy.”

Fall 2020 was extremely dry, especially in the Sierra Nevada, and follows last year’s below-average snow and precipitation, according to the DWR. With only a couple months remaining in California’s traditional wet season, DWR officials say Californians should look at ways to reduce water use at home. 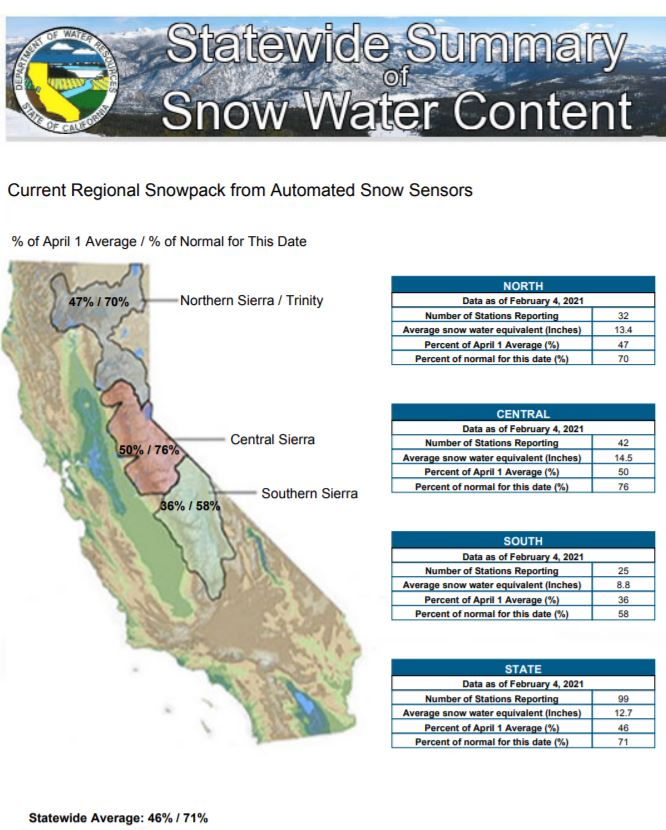 Flooding rains and record snow in California last week marked another extreme swing of the state’s climate pendulum. The widespread downpours triggered mudslides that damaged homes and roads near some of the huge fire scars from last summer, and also brought some of the water the state will need to end a months-long hot and dry streak and douse a record-setting wildfire season that extended into January.

Today, it is even likelier that California is entering a multi-year drought.

A drenching storm that brought California much-needed rain in what had been a dry winter wound down Friday after washing out Highway 1 near Big Sur, burying the Sierra Nevada in snow and causing muddy flows from slopes burned bare by wildfires.

The atmospheric river weather system that barreled ashore in Northern California early in the week rolled quickly through Southern California overnight and was moving east before dawn. Remnants unleashed occasional downpours and hail.

The third winter storm of the week has arrived in San Diego County, bringing heavy rain to the region Friday along with the possibility of snow in the mountains, according to the National Weather Service.

The “atmospheric river” is making its way east across the county, with the heaviest rainfall expected early Friday morning, then scattered showers into Friday afternoon, forecasters said.

Greater San Diego could get 1.5 inches of rain from an “atmospheric river” weather system that will flow ashore Thursday night and last through Friday, when it also will leave a few inches of snow on the county’s highest mountain peaks, says the National Weather Service.