This feature highlights water utility employees in the San Diego region working during the coronavirus pandemic to ensure a safe, reliable and plentiful water supply. The water industry is among the sectors that are classified as essential. Dana Gutierrez, Otay Water District Customer Service Representative II, is the Water Utility Hero of the Week.

Maybe you’re brushing your teeth; perhaps you’re rinsing your dishes; you could be watering your plants. When you turn on your faucet in parts of Wyoming, Colorado, Utah, New Mexico, Nevada, Arizona, or California, there’s a good chance you’re drawing water from the Colorado River.

Poseidon Water could be headed back to the drawing board to better compensate for the marine life expected to be killed by its proposed desalination plant in Huntington Beach.

After hearings this week for one of two remaining major permits needed for the project, several members of the Regional Water Quality Control Board indicated they were dissatisfied with the proposed mitigation for the larvae and other small marine life that would die as a result of the plant’s ocean intake pipes.

“These awards are a testament to the importance we place on keeping our community informed and involved in key infrastructure projects,” said Tess Sangster, economic development director for the City of San Marcos. The city hired JPW Communications to execute communications activities for the San Marcos Creek project.

In addition, the San Diego County Water Authority was honored with an CAPIO Epic Award for its Water News Network website, launched in mid 2018. Judges lauded the website for keeping stakeholders in mind with design and original content and photos. The water authority said stories from the website are picked up by regional news media on a weekly basis, and the percentage of views generated through organic search has increased 454% since inception.

“Over the past two years, the Water News Network has become a timely and reliable source of news and information about a variety of water issues, projects and programs affecting more than 3.3 million across San Diego County,” said Denise Vedder, public affairs director. “We’re proud to collaborate with our member agencies on this and other outreach and education efforts about region’s most precious natural resource.”

Some Bakersfield residents’ water bills will be fundamentally restructured, with big cost implications, if the California Public Utilities Commission votes Thursday to end an experiment that 12 years ago erased a financial incentive to sell people more water.

Under the proposal, California Water Service and other investor-owned utilities would no longer bill customers a surcharge covering the cost difference between expected and actual water usage.

The CPUC’s consumer-advocacy arm supports the proposal and estimates it would save ratepayers 10 percent to 15 percent, maybe more, on their water bills.

Droughts are common in California. The drought of 2012-2016 had no less precipitation and was no longer than previous historical droughts (Figure 1), but came with record high temperatures (Figure 2) and low snowpack (Figure 3), which worsened many drought impacts. Water supplies for agriculture and urban users statewide struggled to meet water demands. Conservation and rationing, increased groundwater pumping and a diversified economy helped keep California’s economy robust in most sectors. The drought degraded environmental conditions in the Sacramento-San Joaquin Delta as the region became saltier and warmer, invasive weeds spread, and iconic fishes like salmon and Delta smelt had strong declines.

The grant from the U.S. Department of the Interior’s Bureau of Reclamation will be used for the desalter plant that will treat brackish groundwater from the nearby Pleasant Valley Groundwater Basin. The filtered water will account for 40% of the city’s overall water supply once the facility is finished. It will help Camarillo wean itself from the more expensive imported water it has relied on since its incorporation in 1964.
Full Story
https://www.waternewsnetwork.com/wp-content/uploads/2018/02/water-news-network.png 0 0 Ed Joyce https://www.waternewsnetwork.com/wp-content/uploads/2018/02/water-news-network.png Ed Joyce2020-08-03 09:36:302020-08-05 15:12:48$5 Million in Federal Funding Granted for City’s Desalter

Regional water board member Kris Murray is on track later this week to vote on a controversial desalination plant sponsored by a company and interest groups she took money from during past political campaigns.

State regulators have identified more than $6,000 in campaign contributions that Murray fundraised for her Anaheim city council campaigns in 2014 and 2015 and county supervisorial in 2018 from the project’s parent company, Poseidon Water, and two trade unions who voiced support for the project in recent years. 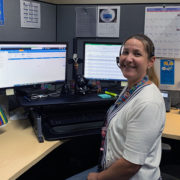 Editor’s Note: This feature highlights water utility employees in the San Diego region working during the coronavirus pandemic to ensure a safe, reliable and plentiful water supply. The water industry is among the sectors that are classified as essential. Dana Gutierrez, Otay Water District Customer Service Representative II, is the Water Utility Hero of the Week.

After several years working in a call center environment, it was time for a change in my career path. I had read a posting in a local publication for a customer service position with Otay and decided to test my luck. I was fortunate. Although there is so much more to absorb in the water industry, I was able to bring my customer service skills to a whole new level. The staff was so friendly and knowledgeable that I had no problems intercepting the traditions and behaviors of the District.

Soon after the pandemic began, our lobby shut down and all staff was sent to work from home. It has been a major adjustment, but our IT staff has done an excellent job in providing us with the equipment and tools needed to complete our daily responsibilities. We are on a rotating schedule now, with only 2-3 reps in our office at a time while the rest of us work from home. We can communicate with one another via text, email, phone, or a video chat.

Otay has done an excellent job in providing staff with safety aids and tips on how to endure this pandemic. We have temperature kiosks in which we must have a temp scan prior to reporting to the building. The District has also installed several hand sanitizing stations and provided masks and gloves to staff when dealing with the public. While at home, it’s a simple practice of follow the guidelines and recommendations of the CDC.

It would be nice to be normal again. Just being able to socialize with family and friends again without the partition.

The Water Utility Hero of the Week highlights essential work performed during the COVID-19 pandemic by employees of the San Diego County Water Authority’s 24 member agencies.

Lake Jennings received nine awards in the East County Californian’s 2020 Best ... of East County Readers Poll! Thank you to all that voted and congratulations to everyone who makes @lakejennings such an award-winning destination: http://hwd.fyi/6g9. #boes2020 #community #cawater

Rain and snow continue this afternoon! We're ... even seeing a few thunderstorms too. ⛈️

Showers will continue through tonight, then taper off overnight into early Tuesday morning. #cawx