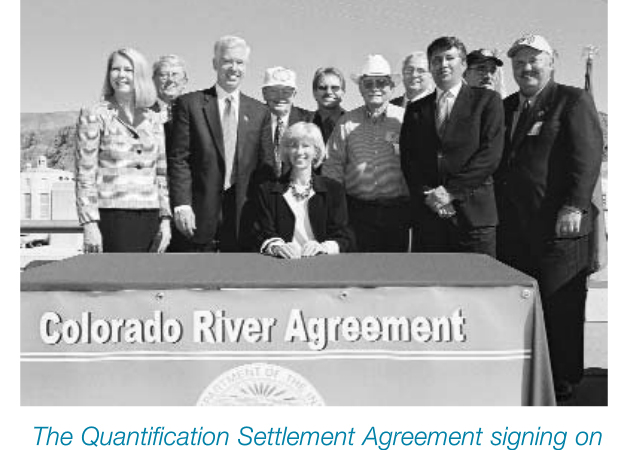 In 1995, the San Diego County Water Authority began negotiations with the Imperial Irrigation District (IID) for the transfer of up to 500,000 acre-feet of water per year from the fertile farming area in the southeastern corner of California. In 1998, the Water Authority and IID signed an agreement that provided for the transfer of between 130,000 and 300,000 acre-feet of water per year, depending on the exercise of certain options. Despite legislation signed in 1998 by then Governor Pete Wilson to encourage the transfer, its actual implementation took five more years to materialize.

Faced with the propsect of reduced sales to its largest customer, the Metropolitan Water District (MWD) responded to the Water Authority-IID deal with an all-out battle to protect its monopoly. In late 2003, pressure from the California State Legislature and the governor forced MWD to back down. It joined the Water Authority, IID, the Coachella Valley Water District, state of California, and the U.S. Department of the Interior in signing the historic Colorado River Quantification Settlement Agreement (QSA). The QSA created a plan for limiting the state’s use of Colorado River water to its basic annual appointment of 4.4 million acre-feet, instead of continuing to rely on surplus supplies that belonged to other fast-growing states in the Southwest.