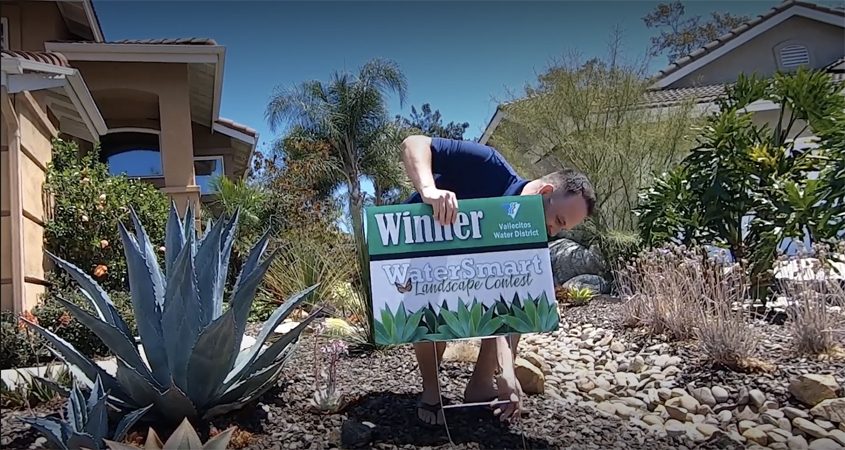 The Delaplanes received first place due to the addition of a working bioswale. Photo: Vallecitos Water District

Three San Marcos families invested their time and effort into transforming their front yards into beautiful water-efficient designs. Their hard work has paid off in lower water bills and being named the winners of the 2022 Vallecitos Water District Landscape Makeover Contest.

The winning project created by John and Jay Delaplane started as a way for John to reconnect after his father Jay retired. John saw the landscaping display in front of the Vallecitos Water District building, inspiring him to get started. Another catalyst was the opportunity to earn a turf removal rebate. “You can almost cover the costs if you do the work yourself,” said John. 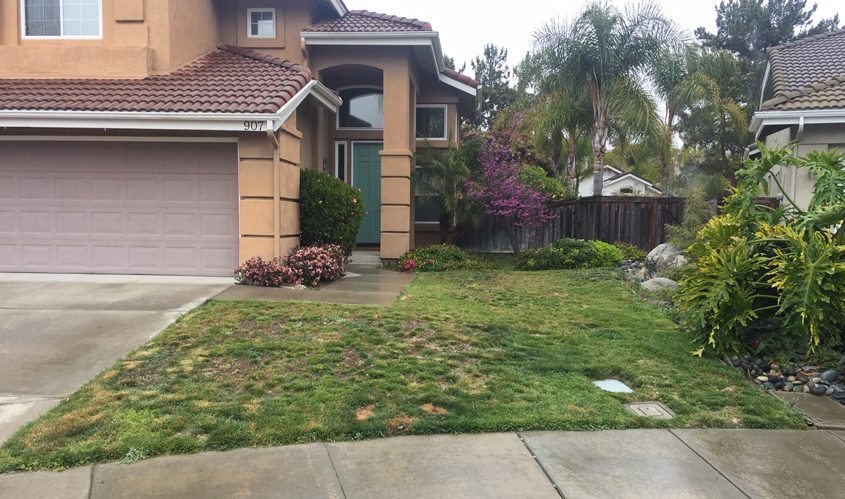 The Delaplane home before its transformation. Photo: Vallecitos Water District

Vallecitos Water District public information representative and UCCE Master Gardener Lisa Urabe said the Delaplanes received first place among many excellent entries due to the addition of a working bioswale.

“Some people will just put rocks down and make it a pretty dry riverbed, but this is a working bioswale,” said Urabe. Bioswales redirect and absorb rainwater running off roofs, preventing stormwater pollutants from reaching local waterways and the Pacific Ocean. “By installing a bioswale, it’s collecting all that water. It’s also helping to water those plants naturally. We highly recommend them,” said Urabe. 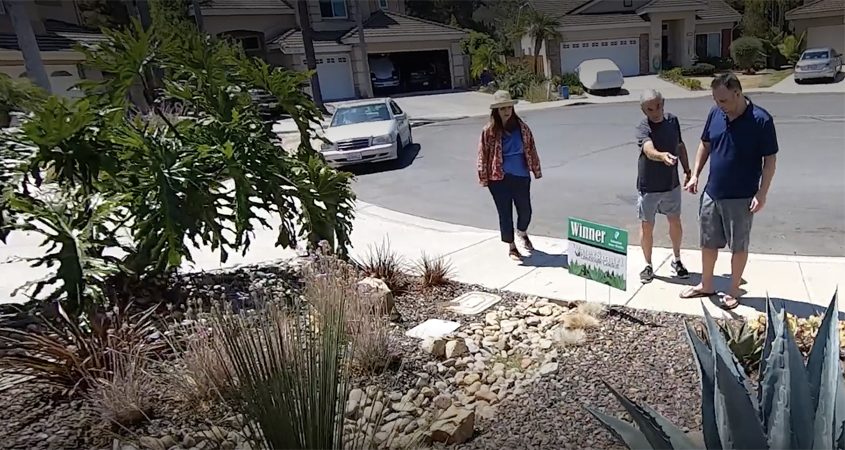 “Growing up, my dad taught me about being environmentally conscious when we can,” said John Delaplane. “If everyone does their little part, it really does add up. A big reason we did it is to teach these lessons to my daughter, so she grows up with that same mindset.” 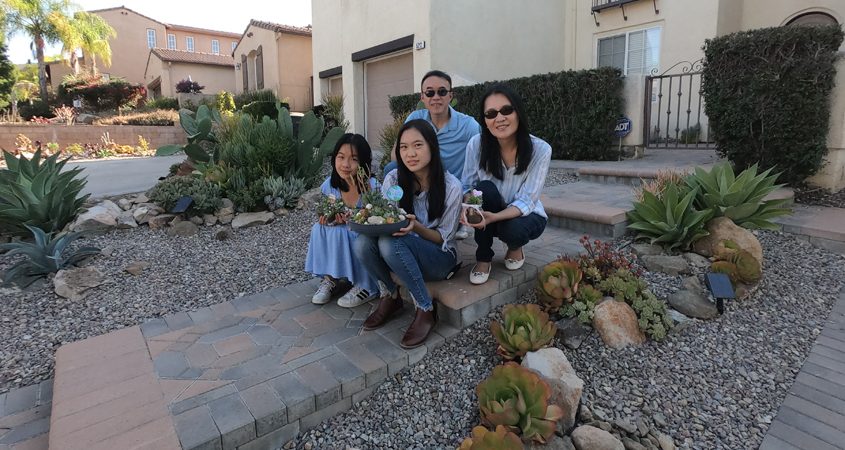 The Chens transformed their love for succulents into an award-winning landscape makeover. Photo: Vallecitos Water District

Davis and Stephanie Chen and their two children all pitched in on their landscape makeover project. Their new design won second place.

After 18 years of living in their San Marcos home, Stephanie Chen said she decided to change their landscaping, inspired by her love for succulents. “I wanted to create something I like and enjoy. One day a crazy idea came to me – lucky my family supported me,” said Chen. 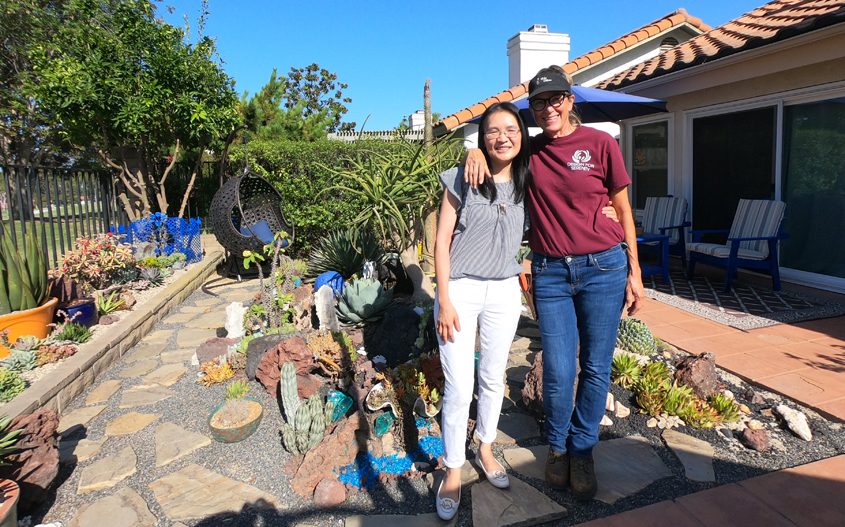 “We would watch and brainstorm about it,” said Brittany. “The videos were super helpful. They not only taught us how to design a garden but also properly care for our garden, so they grow beautifully.”

David Chen said the Socal Turf Replacement program and the landscape makeover content gave them a lot of incentive to complete this project. “I encourage everybody to give it a try,” he said. 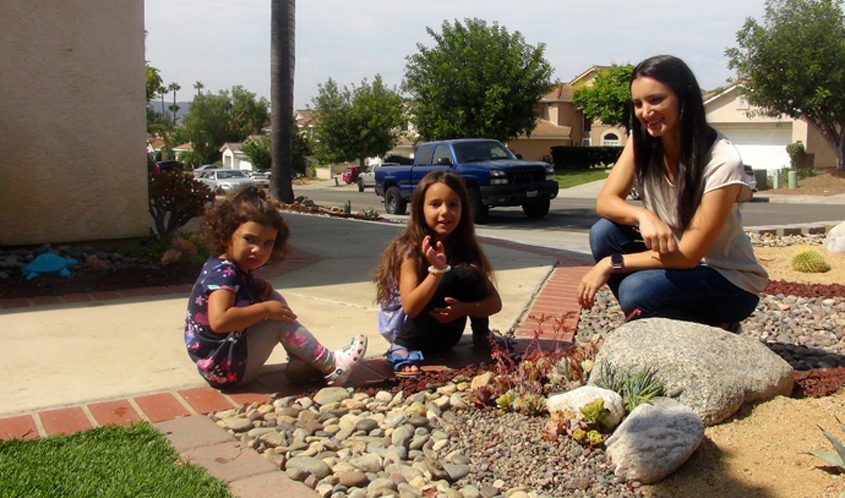 Tania and Tony Lopez tackled their landscape makeover on their own. Photo: Vallecitos Water District

Married couple Tania and Tony Lopez tackled their landscape makeover on their own after receiving a district brochure and decided to change their landscape to save water. Their landscaping only needs minimal hand watering.

“It’s been in since March, and it’s doing pretty well,” said Tania Lopez, whose favorite features are the agaves and golden barrel. “Water conservation is very important. In California, we’re in a drought all the time. Being able to save water is a good thing.”

Five-year-old daughter Ava Lopez has gotten the message. “It’s important to save water for the earth,” said Ava.