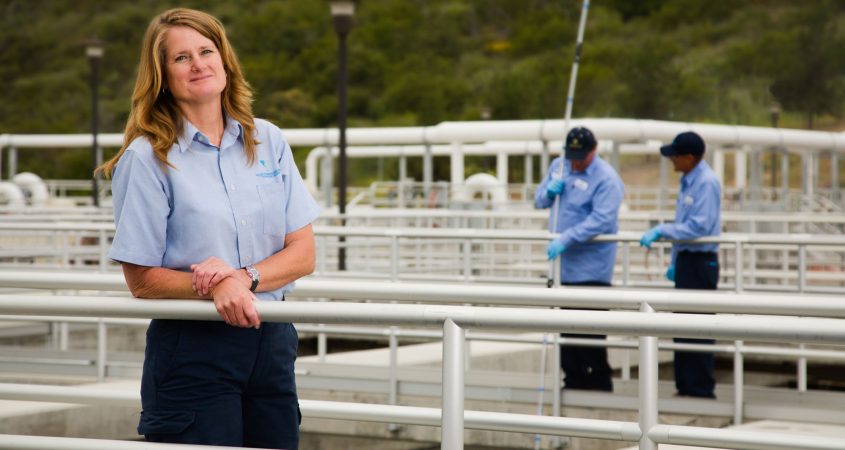 From her first day on the job at Vallecitos Water District in 1988, Dawn McDougle knew that she wanted to finish her career at the San Marcos-based water agency.

Her dedication, innovation, and commitment to the community have paid off in many ways over the decades. In January, they brought McDougle to the forefront of the region’s water industry when the California Water Environment Association of San Diego recognized her as Supervisor of the Year for her career of excellence, safety and protecting the environment.

McDougle started at Vallecitos as an industrial waste technician at a time when few women performed this work. She advanced her career by taking classes and earning certifications – and she helped others by mentoring and coaching them along the way. In 2002, McDougle was promoted to wastewater treatment plant supervisor.

Over the past 16 years, McDougle played a major role in the operation and management of the Meadowlark Reclamation Facility – recognized in 2009 with an Award of Excellence from the American Society of Civil Engineers.

“It’s been an awesome road with the Vallecitos Water District, and I am always going to be grateful to say I spent my career here and achieved all the goals I wanted to achieve,” said MdDougle.

McDougle masterminded the use of new process units that extended the useful life of the Meadowlark plant well beyond 2030. With many constraints along the way, she kept the existing plant operating while constructing a new plant and meeting the plant expansion output goal of 5 million gallons per day.

McDougle’s staff at Meadowlark praise her extensive knowledge, her leadership, and her generosity in passing on her knowledge to others. “Dawn gave me an opportunity … She’s been great, she shows me what I have to do in order to be a successful operator. She’s top notch in this industry,” said Fernando Mata, Plant Operator.

The Meadowlark facility is visited frequently by students and ratepayers, because it provides an excellent opportunity to see how wastewater is converted to a valuable resource. Vallecitos developed successful outreach programs with McDougle’s guidance, including the California Water Environment Association “Wake up to Wastewater” tour, and the district’s award-winning Water Academy tour.

During the Water Academy tour, McDougle highlights how the district plays an integral role in protecting the environment through water reuse. It showcases an industry leader, who has spent her career making sure the district’s facilities live up to their promise.