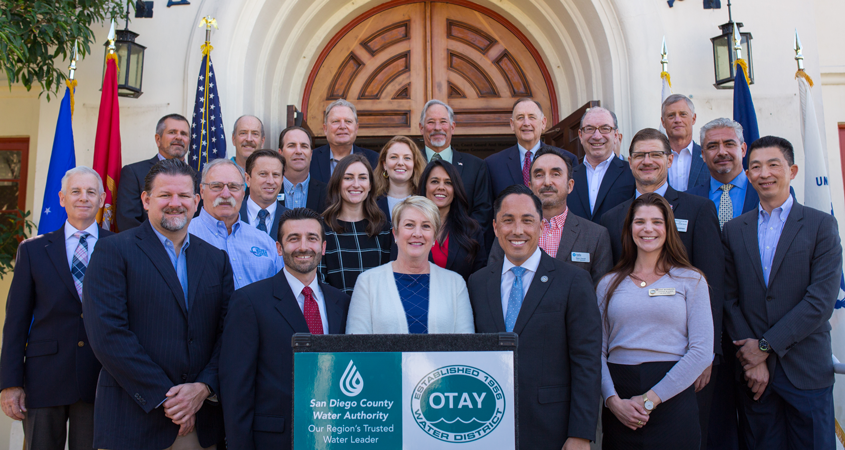 Legislation co-sponsored by the San Diego County Water Authority and the Otay Water District is intended to make it easier for military veterans to launch careers in the water industry.

After Lt. Jose Martinez retired from the U.S. Navy in 2007, he went from serving his country underwater to serving reliable, high quality water to a community.

His experience aboard a nuclear submarine and on the management staff of Otay Water District shares a few commonalities. Both involve highly complex systems, which often operate away of the public eye, either underwater or underground.

“People turn on the tap and out comes water,” said Martinez, General Manager for ACWA-member Otay Water District. “It seems rather simple, but it’s really complex. It’s fascinating to me.”

Martinez’s experience as a naval nuclear engineer focused on submarines’ nuclear and non-nuclear systems, including water treatment. This gave him an advantage to transition to a civilian career in water.

A bill and new law, signed by Gov. Gavin Newsom in October 2019, sets the stage for making it much easier for military veterans to transition into the water industry. AB 1588, initiated by Martinez and Otay, intends to update the current water and wastewater certification system by giving military veterans credit for their experience and education that is applicable to the water industry. Essentially, veterans would not have to start at the bottom, but instead advance to testing that matches their level of experience. That way, veterans can enter the water workforce at a level that meets their paygrade.

To address this challenge, the Water Authority and its 24 member agencies created a regional workforce development task force to address the oncoming ‘Silver Tsunami’ of retirees. The San Diego region alone employs approximately 4,500 water and wastewater workers, with more than 1,400 of those workers expected to reach retirement age by 2024, according to the Water Authority. Statewide, there are approximately 6,000 active certified wastewater treatment plant operators, and approximately 35,000 drinking water treatment and distribution operators.

Jobs within the water industry often reflect military experience, and not necessarily ones directly related to water and wastewater treatment on a base or aboard a ship. Don Jones, with the Center for Water Studies at El Cajon’s Cuyamaca College, compared experience within a Combat Information Center on a warship to operating a SCADA system at a water facility, pointing out that experienced SCADA operators can be hard to find.

“It doesn’t matter if you’re opening a pump or firing a missile, the process is very similar, it’s the mechanical and electronic interface that matters. You’re electronically activating a piece of mechanical equipment,” Jones said.

‘It’s all about serving people’

The water industry can also offer veterans a few other advantages. Shannon Cotulla served in the U.S. Army as a combat engineer between 1987 and 1992. After leaving the service, he contemplated aviation engineering, but a desire to work outdoors in civil engineering led him to the water industry. Today, Cotulla is Assistant General Manager at the South Tahoe Public Utility District and former member of ACWA’s Board of Directors.

“The work is really meaningful, it’s all about serving people and keeping our communities safe,” Cotulla said. “There’s also security in knowing that your organization has rules and standards that you can look up to and isn’t subject to the whims that you sometimes find in the private sector.”

Otay’s Martinez said that it could take a few years for the state to make the changes called for in AB 1588. Nevertheless, the process is underway and includes having a veteran with water industry experience serve on a regulatory advisory board along with water industry members. In the meantime, news about the bill’s potential for veterans is raising awareness among veterans about why careers in the water industry represent a great opportunity.

“We really want to open up this talent pool,” Martinez said. “Veterans are the right candidates to fill these jobs because of the skilled work they’ve already demonstrated in their careers and their time in the military.”