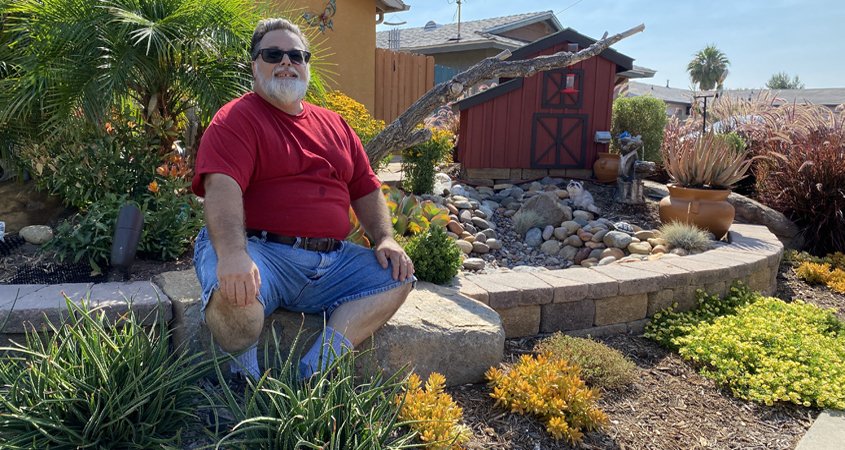 Frank Edward’s Santee home is bursting with bright colors and textures. Vibrant yellow, orange, red, green, and purple flowers, and drought-tolerant, native plants spring to life where there was once just dry and patchy grass.

“It was a lot of hard work but it was also a lot of fun,” said Edward. “It was great to see all of my labor come to fruition.”

The transformation from high maintenance lawn to vibrant design is the winner of the 2021 Padre Dam Municipal Water District Landscape Makeover Contest. 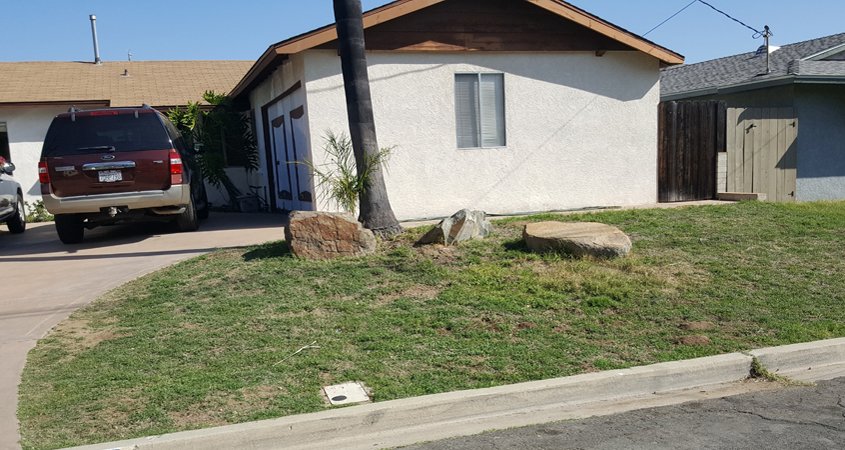 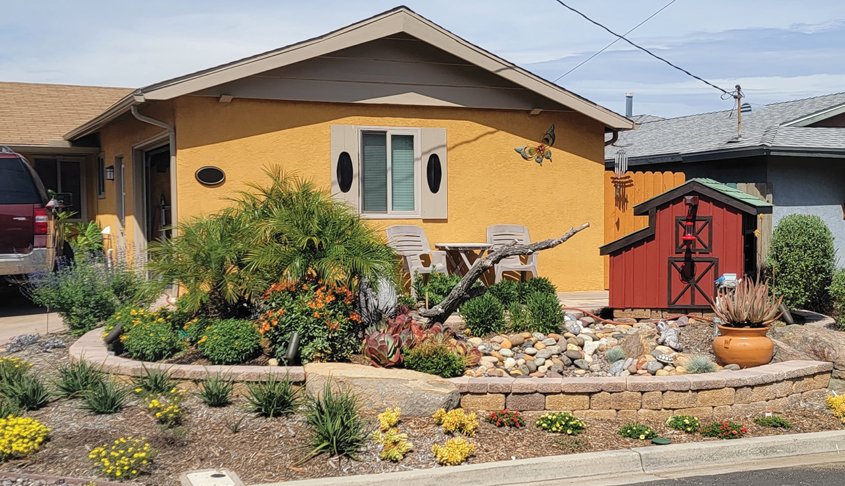 Edward began his water-efficient landscape journey in 2018 when he attended a three-hour WaterSmart Landscape Workshop at Padre Dam’s customer service Center. He was tired of his high maintenance, drought-bleached lawn and wanted his landscape to add to the overall attractiveness of his home.

During the workshop, he learned about the WaterSmart Landscape Makeover Series, a four-class series that helped him through the process of preparing his space, designing his landscape, selecting plants, and irrigation planning. Edward used a kidney bean shaped planter as a starting point and designed his landscape around this feature.

“Hard work but a lot of fun” to complete landscape makeover 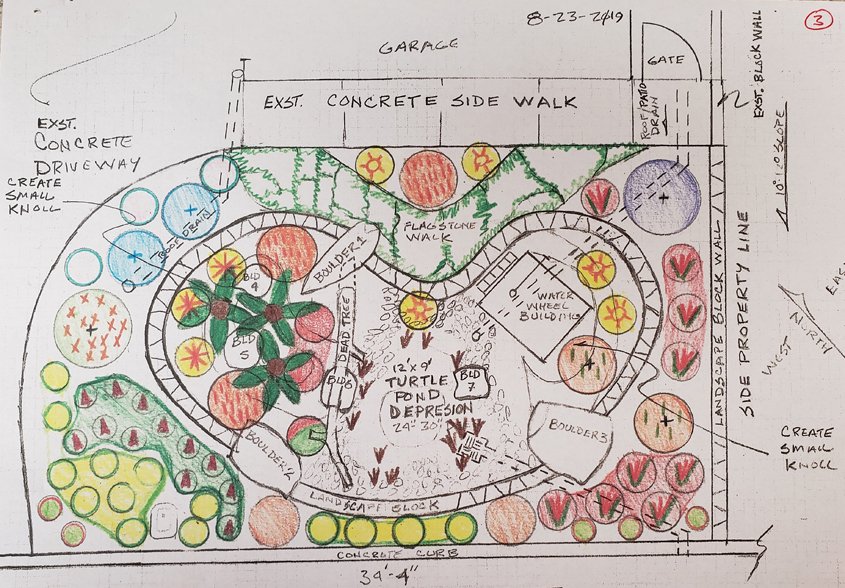 Edward had a fully designed layout ready to be implemented by the end of the class series. He set to work removing his old turf and installing his new landscape in the spring of 2019 and did all of the removal, designing, and planting himself. He even constructed a small barn that acts as a shed and a footbridge over his riverbed to add unique and functional design elements. The work took about a year to complete. Water storage features including a small pond and rock river bed, which add depth and shape to the contoured yard. 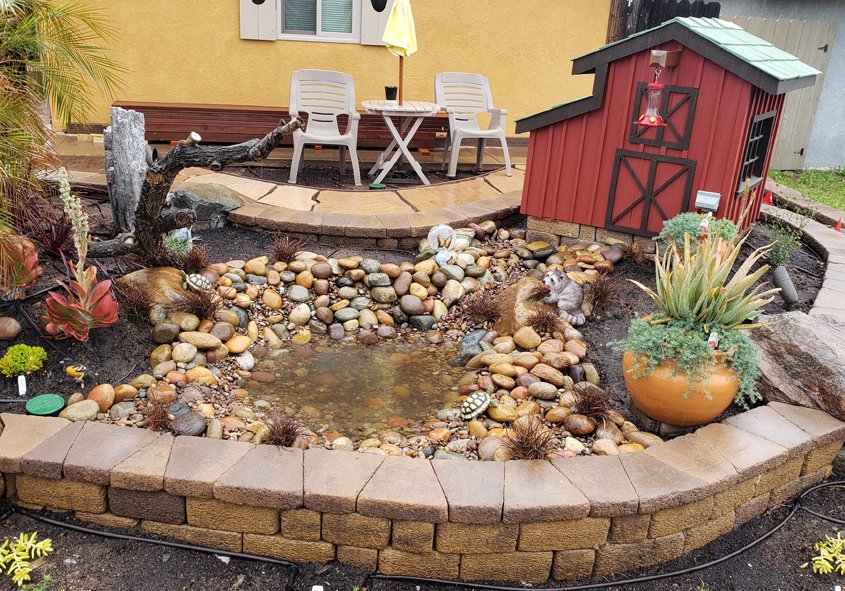 The new yard has places to sit and enjoy the flowers, pollinators, and birds. Photo: Padre Dam Municipal Water District

Edward installed piping to collect water off his roof, collected in a rain barrel, and diverts it to the landscape’s rock river bed. Additionally, he created a pond that can hold several hundred gallons of water. This collected rainwater helps to irrigate the plants by replenishing the soil’s moisture for a period after it rains. Edward also installed a smart controller that waters the plants based on hydrozones and local weather through a drip irrigation system. 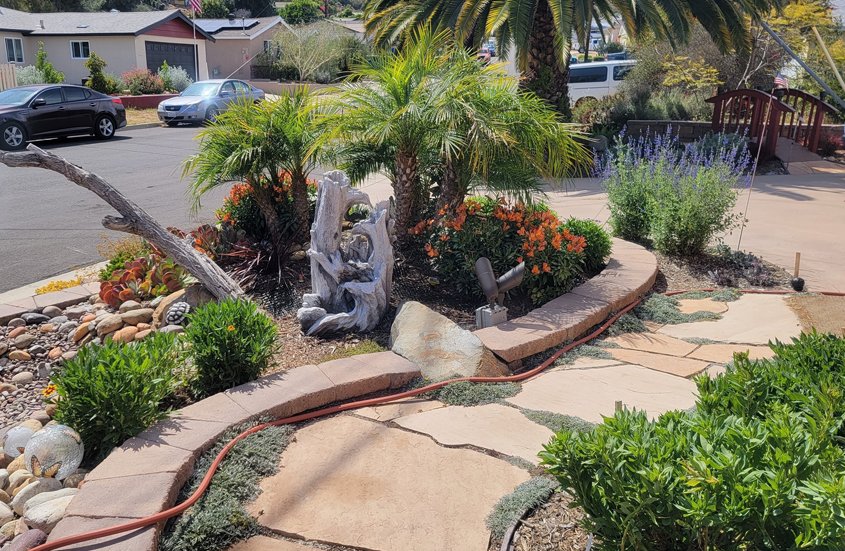 Edward now spends time relaxing and listening to birds in his front yard. He enjoys the peaceful atmosphere and the satisfaction he gets when neighbors and passersby compliment his landscape. He recommends that others looking to plant a water-smart landscape put in the time to research and plan in order to create an environment and design that will work for their lifestyle.