September 24, 2020 — New officers for the San Diego County Water Authority’s Board of Directors were elected today, with Gary Croucher starting his two-year term as Board chair on Oct. 1. 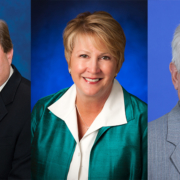 New officers for the San Diego County Water Authority’s Board of Directors were elected today, with Gary Croucher starting his two-year term as Board chair on Oct. 1.

Jim Madaffer, who represents the City of San Diego on the Water Authority’s Board, served as chair the past two years. His term ends on Sept. 30.

“The Water Authority is one of our region’s most important institutions, and I’m committed to continuing our long legacy of providing safe and reliable water supplies that sustain 3.3 million people and our $245 billion economy,” said Croucher. “The collaboration with our 24 member agencies is vital to ensure a clean, safe and plentiful water supply for this beautiful place we call home.”

“We are stronger together”

“Looking ahead, Water Authority priorities include assessing the infrastructure necessary to provide water supply reliability for generations to come and leveraging existing infrastructure to increase long-term energy storage. We’re also focused on opportunities to expand partnerships that will benefit our region and the entire Southwest,” Croucher said. “I will also be devoting my personal energy and attention to addressing and resolving concerns two Water Authority member agencies have in seeking detachment from the Water Authority, because I firmly believe we are stronger together.”

He also said that the Water Authority will continue efforts advanced under Madaffer’s leadership to resolve legal disputes over rates with the Metropolitan Water District of Southern California while looking for ways to collaborate with MWD on other issues.

Madaffer, presiding over his last meeting as Board chair, was honored by staff and Board members for his leadership — following on the two-year efforts of his predecessor, Mark Muir, on the rate case litigation, which included securing nearly $500 million dollars from MWD for water supply projects in San Diego County, elimination of illegal charges being imposed on San Diego ratepayers and entry of a final judgment in the 2010 and 2012 cases, and awarding Water Authority almost $45 million. Madaffer also presided over efforts by the Water Authority to minimize rate increases, the development of a new agricultural water rate program to benefit the region’s farmers, and efforts to enhance communication and coordination with member agencies.

New Board Chair is a career firefighter

Incoming Board Chair Croucher joined the Water Authority Board in July 2001 and served as Vice Chair Board for the past two years. He is a member of the agency’s Administrative and Finance Committee and the Legislation and Public Outreach Committee. He’s also chair of the Colorado River Work Group and a member of the MWD Settlement Negotiations Team.

A career firefighter, Croucher retired as an assistant chief for CAL FIRE/San Diego. Croucher is chair of the Border Agencies Fire Council. He is a three-time president of the Otay Water District Board of Directors and former fire chief of the San Miguel Consolidated Fire Protection District. Croucher also serves on the Local Agency Formation Commission’s Borders Committee. He is a past chairman of the Border Agency Fire Council, past president of Southern Area Fire Equipment Research, and he has participated on both state and federal Homeland Security programs.

Christy Guerin, the new vice chair, served as Board secretary the past two years, and sits on the Water Authority’s committees for Imported Water and Legislation and Public Outreach, along with the Colorado River Work Group and the MWD Settlement Negotiations Team.

She joined the Board in 2014 representing Olivenhain, where she is a director on the board. Guerin served for a decade with the San Diego County Sheriff’s Department, as mayor of Encinitas from 2002-2006, and as a district director for a member of Congress. She has also served on the SANDAG board, the North County Transit District board and the board of the San Elijo Joint Powers Authority.

Jerry Butkiewicz, the new Board secretary, currently serves as chair of the Water Authority’s Legislation and Public Outreach Committee and sits on the Colorado River Work Group and Water Planning and Environmental committees. He is also one of the Board’s MWD Delegates and serves on the MWD Settlement Negotiation Team He joined the Board in 2016 representing the City of San Diego. Butkiewicz is the former Executive Secretary-Treasurer of the San Diego & Imperial Counties Labor Council.

The Water Authority’s 36-member board, representing 24 retail member water agencies, holds its regular meetings on the fourth Thursday of each month January through October. The November and December meetings are combined, and this year that meeting is November 19. Board meetings have been conducted online since April 2020 due to the coronavirus pandemic and are live-streamed on the Water Authority’s website. Board documents and webcasts of Board meetings are at www.sdcwa.org.

It’s been nearly two decades since a controversial deal transferred huge amounts of Colorado River water out of the Imperial Valley and away from the Salton Sea, but still no long-term solution has been found to cover thousands of acres of toxic dust exposed at California’s largest lake.

The National Weather Service says that conditions are in place for a La Niña weather pattern in the fall and winter of 2020-21. That could bring warmer, drier than usual weather to San Diego over the next few months.

By definition, La Niña happens when the water along the equator is colder than usual. That pushes the jet stream farther north and directs storms away from the Pacific Southwest region of the United States.

Growers of some of San Diego County’s most lucrative crops — flowers, nursery plants and exotic fruits — can now get federal cash to cover some coronavirus-related losses. The U.S. Department of Agriculture’s initial relief program left out these small farmers who contribute significantly to the county’s nearly $1.8 billion agricultural economy.

The department expanded the program to include more specialty crops in August and announced last week it would make an additional $14 billion available to farmers through mid-December. Growers could begin applying for the relief this week.

Hannah Gbeh, executive director of the San Diego County Farm Bureau, called the federal aid “the lifeline our producers need to help weather the economic challenges that came along with the pandemic.”

Hurricanes have the Saffir-Simpson Scale (Category 5), tornadoes have the Enhanced Fujita Scale (EF-3) but now the West Coast has a storm scale of our own with a recent introduction of a new rating system for atmospheric rivers — the causes of a vast majority of our annual autumn and winter flooding damage.

The autumn equinox was at 6:30 a.m. PDT on Tuesday, meaning there are nearly equal periods of daylight and darkness. From now until the winter solstice in December, days will gradually get shorter and nights will get longer in the Northern Hemisphere.

A Central California water board is poised to do something rare in American agriculture: It is trying to establish enforcement mechanisms — not just toothless regulations — to limit the use of farm fertilizers that contribute to dangerous levels of groundwater pollution. If the effort is successful, within a few decades it will have reversed or at least stopped adding to the pollution of groundwater beneath the Salinas and Santa Maria valleys.

Del Mar will begin the process of developing a new rate structure for its Clean Water Program.

The process of implementing a rate increase is expected to unfold over the next year, and will include a vote by Del Mar property owners.

After a wildfire ripped through central California last month, residents in the Riverside Grove neighborhood in the Santa Cruz Mountains discovered another danger: contaminated water coursing through their pipes.

Benzene, a chemical tied to cancer, leukemia and anemia, was detected in the town’s drinking water after 7 miles of plastic water piping was torched in the CZU Lightning Complex Fire south of San Francisco. Plastic pipes are used for their flexibility in earthquake-prone California. Today, about 450 homes there remain under a “do not drink” advisory.