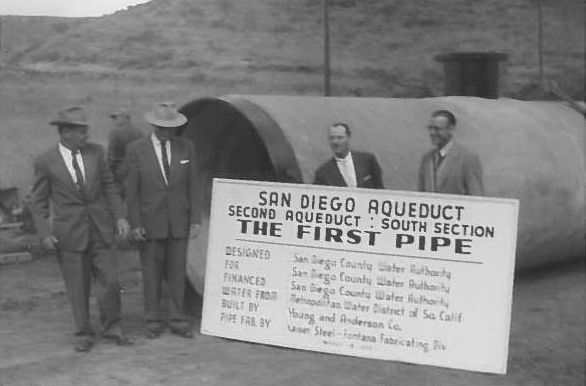 When World War II concluded, most experts expected San Diego’s population to decrease, but that was not the case. Pipeline 1 proved inadequate to meet the region’s water needs. Drought years in 1950-51 increased concerns about water shortages.

The Water Authority appealed to the U.S. Navy to help build a second pipeline. It was willing, but its hands were tied by the Bureau of Reclamation, which built the first pipeline because of the wartime emergency. With the war over, it could not fund the project unless Congress authoritzed the Navy to request it.

The first chairman of the San Diego County Water Authority, Fred Heilbron, undertook the effort to create consensus to build Pipeline 2. Among his tactics: crashing a breakfast meeting between the Secretary of the Navy and then president of the Metropolitan Water District board of directors; and enlisting help lobbying Congress including Senator Richard M. Nixon.

The effort paid off. Officials celebrated every milestone of construction, including the installation of the first section of pipe.

The San Diego County Water Authority is one of the 100 pit stops for today's SANDAG Bike to Work Day. Stop by our Kearny Mesa office between 6 a.m. and 9 a.m. to pick up a free t-shirt and snacks. Registration required to receive free T-shirt: bit.ly/37XjkuN ... see moresee less