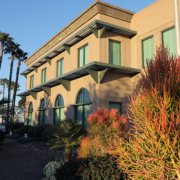 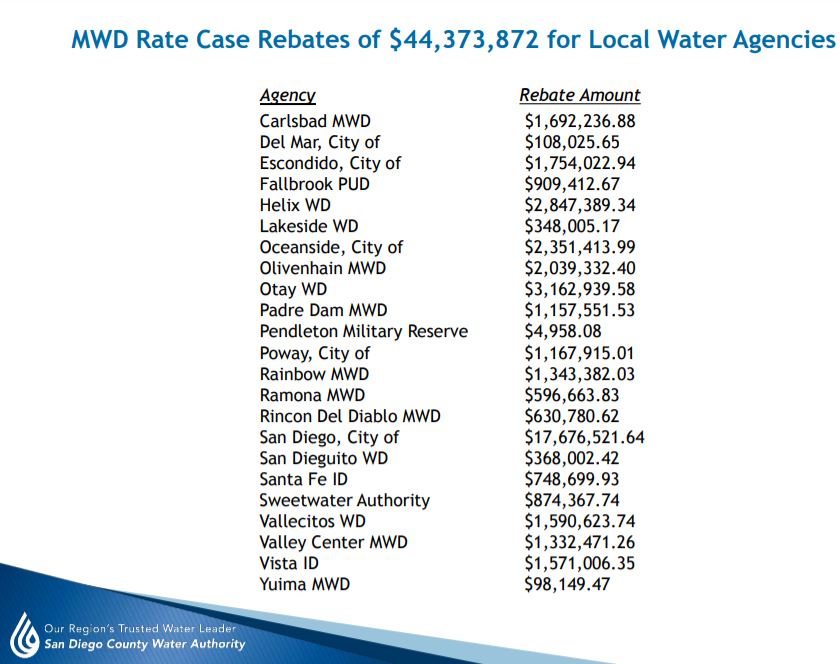 A San Francisco Superior Court judge ruled the San Diego County Water Authority is the prevailing party in the first of two lawsuits challenging rates and charges set by the Los Angeles-based Metropolitan Water District of Southern California. The order entitles the Water Authority to recover its attorneys’ fees and costs in those cases, in addition to a $44 million damage and interest award made earlier. 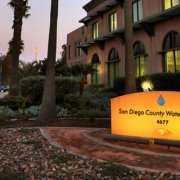 The San Francisco Superior Court has ruled the San Diego County Water Authority is the prevailing party in the agency’s first two lawsuits to be heard challenging rates and charges set by the Los Angeles-based Metropolitan Water District of Southern California. The order entitles the Water Authority to recover its attorneys’ fees and costs in those cases, in addition to a $44 million damage and interest award made earlier.

“San Diego prevailed, and the judgment not only benefits its own ratepayers but all of the nearly 19 million people in Metropolitan’s service area because enforcing cost-of-service principles serves the interests of all ratepayers,” said Superior Court Judge Anne-Christine Massullo in her Jan. 13 order, which can be appealed. The exact amount of recoverable fees will be decided later.

In light of the order, Water Authority Board Chair Gary Croucher reiterated the Water Authority Board’s longstanding desire to avoid litigation and find common ground with other MWD member agencies. “This ruling only enhances our determination to find an equitable resolution that will not only conclude the few issues that remain pending in court, but also help avoid future litigation as new rates and charges are being considered for 2023 and subsequent years,” he said.

The Water Authority filed lawsuits between 2010 and 2018 challenging water rates and charges as they were set and imposed by MWD on San Diego County agencies and their ratepayers. After a favorable court ruling invalidating MWD’s Water Stewardship Rate on the Exchange Agreement, the Water Authority worked with MWD to try to resolve the remaining issues. The MWD Board promised to fund almost $500 million in local water supply projects in San Diego County and the Water Authority agreed to dismiss claims against MWD’s Water Stewardship Rate on supply, which is used to fund local projects under the MWD program.

“It is deeply gratifying that the court not only validated our claims but acknowledged the importance of protecting ratepayers by water agencies following the law,” Croucher said. “This week’s order makes it clear once and for all that our desire to protect San Diego ratepayers was never intended to harm MWD, its other member agencies or the ratepayers they serve. Rather, the litigation was necessary to address serious flaws in MWD’s rates that will, as the court said, ultimately benefit not only San Diego County ratepayers, but all Southern Californians.”

The Water Authority’s first two rate cases – covering 2011 to 2014 rates – resulted in the court ordering an increase in the Water Authority’s preferential right to MWD water by as much as 100,000 acre-feet a year, equivalent to about twice the annual production of the $1 billion Carlsbad Desalination Project. MWD has already complied with this ruling and adjusted its records accordingly.

San Diego County ratepayers have also avoided paying more than $45 million from 2018-2020 after MWD suspended its invalid Water Stewardship Rate charges on the Exchange Agreement. The improper charges would have cost local residents more than $500 million over the term of the Exchange Agreement. Currently, MWD owns the only pipeline that can deliver the Water Authority’s independent supply of Colorado River water to San Diego County and it sets the unregulated water rates which govern and control the delivery of water to San Diego County.

In addition, the court ruled that MWD had illegally barred the Water Authority from receiving money from MWD’s local water supply program, even though the Water Authority was still being forced to pay for it. MWD lifted the ban in response to the court’s order, and ultimately promised the nearly $500 million for water supply projects in San Diego County including the City of San Diego’s Pure Water North City Project Phase 1, East County Advanced Water Purification Project, Escondido Membrane Filtration Reverse Osmosis Facility and Fallbrook Groundwater Desalter Project.

Californians are pushing pause on federal lawsuits against the International Boundary Water Commission, the agency that’s supposed to deal with sewage-filled stormwater rolling into the U.S. from the Tijuana cliffs under a treaty between the two countries.

From the moment he took office, Gov. Gavin Newsom said he wanted to bring peace to California’s water wars. But now, more than a year later, most of the warring factions are united against his plan for governing the Delta.