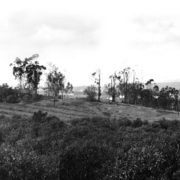 The Fallbrook Public Utility District on June 5, celebrated its 100th year of providing water and sewer service in Fallbrook. From its first years serving 800 customers, the utility district, or FPUD, now supplies water to more than 35,000 residents in North San Diego County. 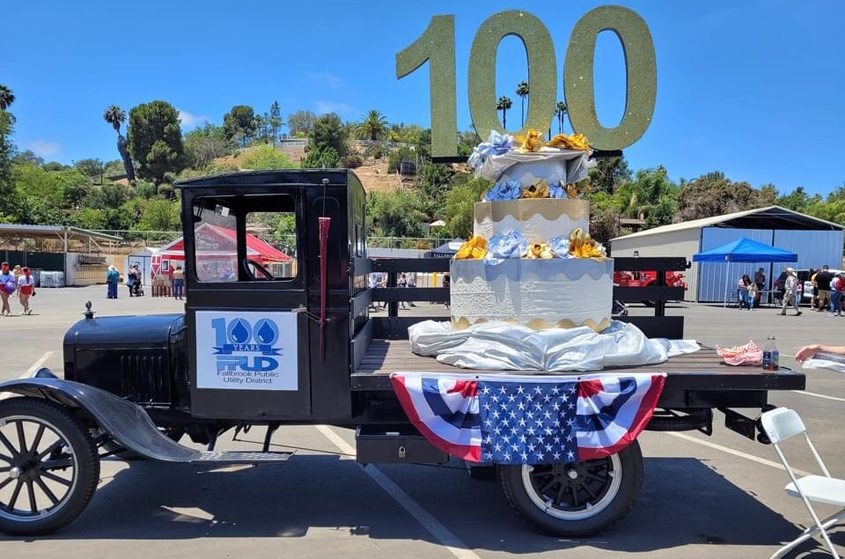 The public celebrated the centennial with an old west themed community celebration on Saturday, June 4, including water games and hands-on water/science labs for kids; antique tractors and vehicles; and activities led by North County Fire Department and the San Diego County Sheriff’s Department. A crowd of 1,200 residents took part in the celebration.

One hundred years of service 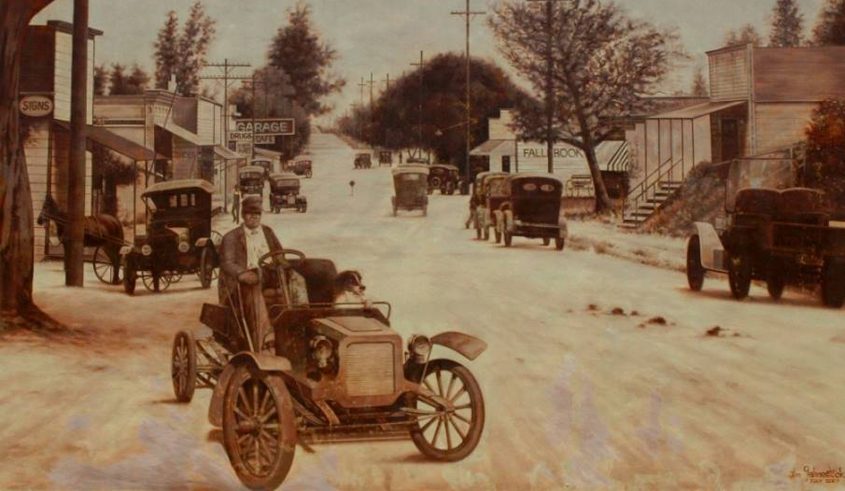 In 1922, the tiny Fallbrook Public Utility District consisted of 500 acres and was incorporated on June 5 to serve water from local area wells along the San Luis Rey River.

Fifteen years later, in 1937, the Fallbrook Irrigation District voted to dissolve, and a portion of the former Irrigation District became a part of FPUD, increasing FPUD’s footprint to 5,000 acres. Responding to the growth, FPUD developed additional groundwater supplies from the San Luis Rey and the Santa Margarita rivers. 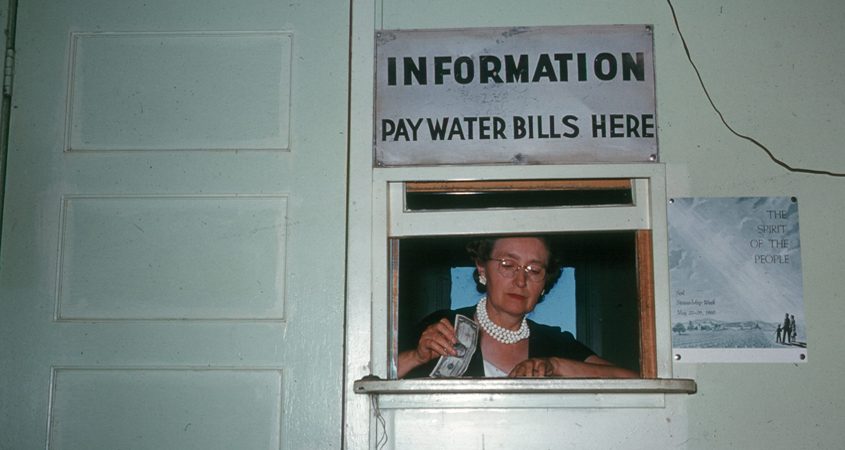 Customer service has always been a priority. This photo dates to the 1950s. Photo: Fallbrook Public Utility District

Significant expansions of the service area took place in 1950 when FPUD annexed the last remaining portion of the Fallbrook Irrigation District and in 1958 when the area to the north of town on both sides of the Santa Margarita River was annexed to the District. By 1959, FPUD was consuming 10,000 acre-feet per year. (An acre-foot is about 326,000 gallons, or enough to serve the annual needs of 2.5 typical four-person households for one year).

The use of Santa Margarita River water ended in 1969 when floods destroyed the district’s diversion works. One year before the floods, the U.S. federal government agreed to develop a dam and reservoir project on the river for FPUD and the U.S. Marine Corps Base Camp Pendleton. It was the culmination of 17 years of water rights litigation in the U.S. vs. Fallbrook case. The federally sponsored project was known as the Santa Margarita Project. 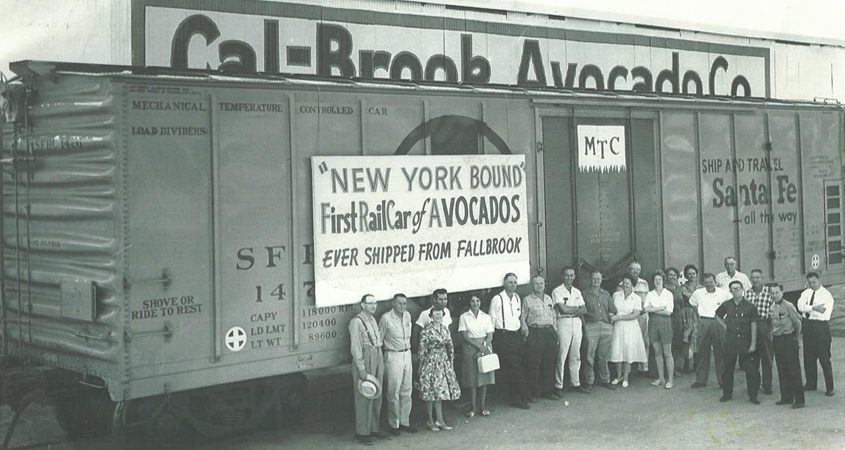 When water became available in the 1920s, avocado trees were planted. By 1985, the region reached a peak of 88,000 acres of avocados. Photo: Fallbrook Historical Society

FPUD’s footprint grew by 11,789 in 1990 when voters in the DeLuz Heights Municipal Water District to the northwest of FPUD decided to dissolve their 17-year-old district. Its entire service area was annexed to FPUD.

FPUD’s scope of operations grew once again in 1994 when the Fallbrook Sanitary District was dissolved, and FPUD assumed sewer service responsibilities within a 4,200-acre area of downtown Fallbrook.

In November 2021, FPUD celebrated the launch of the Santa Margarita River Conjunctive Use Project, some 70 years in the making. The district now receives approximately 50% of its water needs from the river. It was made possible by settling a lawsuit filed against FPUD in 1951 by the federal government over rights to the river.

Fallbrook is well-known for its high-quality agricultural crops, led by avocados and citrus. But according to the Fallbrook Historical Society, before the formation of FPUD, agriculture had to withstand drought conditions. Bee farming was widespread, followed by olives and cattle ranching.

When water became available in the 1920s, avocado trees were planted. By 1985, the region reached a peak of 88,000 acres of avocados. The Fallbrook area also supports commercial nurseries growing flowers, palms, cactus, and plants.

Planning for the next century 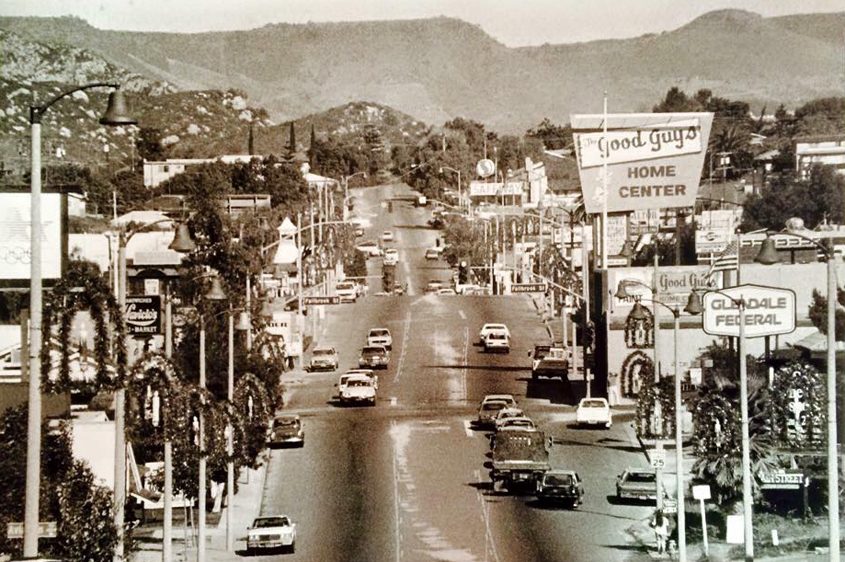 Today after 100 years, the District provides imported and local water and sewer service to 28,000 acres. About 30% of the water is used by agriculture. FPUD also produces about one and one-half million gallons of recycled water daily to irrigate nurseries,  playing fields, landscaped freeway medians, homeowners associations, and common areas.

The Santa Margarita River flows through town but Fallbrook had to fight for 70 years to finally use it.

The narrow river winds its way from Riverside County, through Fallbrook, and eventually onto Camp Pendleton in northern San Diego County where it empties into the Pacific Ocean. For the longest time, the military base did not want to share the river’s water with Fallbrook. The federal government filed a lawsuit against Fallbrook in 1951. Since then, Fallbrook Public Utility District General Manager Jack Bebee said they’ve battled, negotiated, and pleaded with all levels of government. 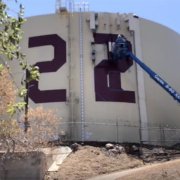 Although the Fallbrook Public Utility District water storage tank uphill from South Mission Road has received a fresh set of painted numbers annually for 35 years, this week’s update was the most anticipated makeover ever.

FPUD crews change the painted numbers on the tank to reflect the year incoming seniors will graduate at Fallbrook High School. A three-person team made up of district employees Matt Lian, Colter Shannon, and Toby Stoneburner recently painted over the “21,” changing it to “22” to welcome the graduating class of 2022.

It took the team five hours to paint the 25-foot-tall numbers onto the 3.6 million-gallon tank, compressed through the magic of time-lapse video to under 30 seconds.

“Parents and Fallbrook High seniors anxiously await the painting of the tank and begin calling the office early in June to find out when we’re doing it,” said Noelle Denke, FPUD public affairs officer. “This year, it’s especially exciting for them because they’re going back to campus and need something to look forward to.”

The reason for the annual external makeover dates back 35 years. Before the district started painting the tank, Fallbrook High seniors took on a longstanding dare. They would climb up the hill in the middle of the night, scale the tank and then paint it themselves.

Since it’s a long way down, FPUD staff became concerned for student safety. Workers installed a fence at the time to prevent access by the annual stealth painting crew.

But it didn’t deter the energetic students. Instead, they just began jumping the fence in the middle of the night. So district officials struck a deal with the students. If they would stop risking their safety for the dare, FPUD would safely paint the tank every year to commemorate them.

The annual painting for the Class of 2022 began due to safety concerns. Photo: Fallbrook PUD

Since the tank shares the space with several cell towers, Fallbrook Public Utility District makes arrangements to power down their towers. Then crews safely hoist themselves up to the tower and get to work painting.

Students at Fallbrook High, Oasis High or Ivy High schools can now apply online for a paid summer internship at Fallbrook Public Utility District. This year, FPUD is looking for students interested in a career in social media and customer service. The internship is available to any student enrolled in one of those schools as a junior or senior for the upcoming 2021-2022 school year. Candidates must be 16 years or older on the first day of the internship, July 12. Pay will be $14 per hour, and the intern will work three hours per week, for six weeks. The internship is designed for students looking to help with social media outreach, create posts and videos, assist with outreach and developing ideas, and learn more about the water industry. It will provide a hands-on learning experience to help build skills and knowledge to help guide students to potential career paths.

The Hemet company had the low bid for the FPUD project, and on April 26 the FPUD board voted 5-0 to approve a $51,444 contract with Genesis Construction.

A Jan. 12 virtual meeting addressed the finds of Asian citrus psyllids in Fallbrook. The meeting was hosted by the state’s Citrus Pest and Disease Prevention Program, which is funded by California growers and administered by the California Department of Food and Agriculture. 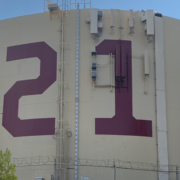 Each year, the Fallbrook Public Utility District’s water storage tank uphill from South Mission Road is painted with new numbers. There’s a story about local Fallbrook history behind the fresh design on the “Rattlesnake Tank.”

The Fallbrook Public Utility District changes the painted numbers on the tank to reflect the year incoming seniors at Fallbrook High School will graduate. Staff recently painted over the “20,” changing it to “21” to welcome the graduating class of 2021.

The reason for the annual external makeover dates back 35 years. Before painting the tank, Fallbrook High seniors took on a longstanding dare. They would climb up the hill in the middle of the night, scale the tank and then paint it themselves.

“Since it’s a long way down, our staff of more than 35 years ago became concerned for their safety,” said Fallbrook PUD’s Noelle Denke. “So we installed a fence around the tank.”

But it didn’t deter the energetic students. Instead, they began jumping the fence in the middle of the night. So the District struck a deal with the students. If they would stop risking their safety for the dare, the district would safely paint the tank every year to commemorate them.

“And we’ve been doing it ever since,” said Denke. 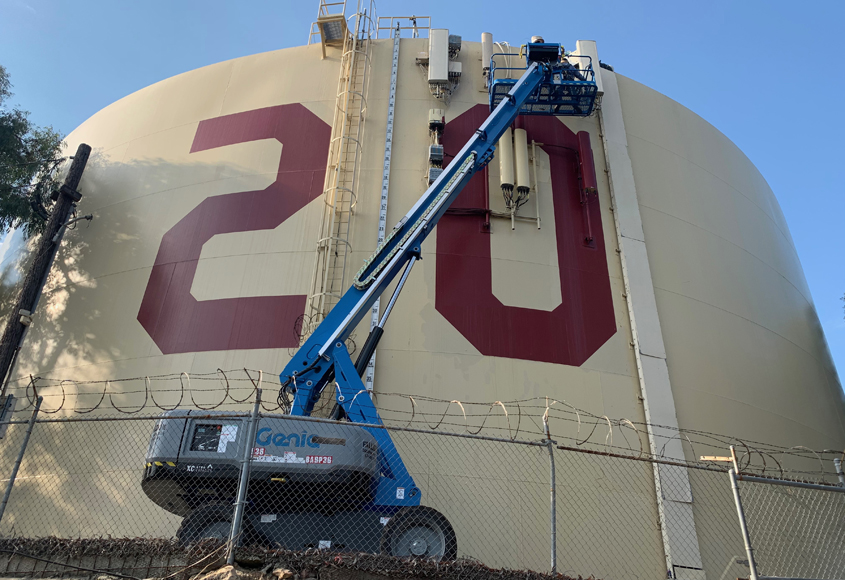 It takes District staff about eight hours to paint the 25-foot-tall numbers onto the 3.6 million-gallon tank. Since the tank shares the space with several cell towers, the Fallbrook Public Utility District makes arrangements with the owners to power down their towers. Then crews safely hoist themselves up to the tower and get to work painting.

When the Fallbrook Public Utility District approved FPUD’s 2020-2021 budget $500,000 was appropriated for the district’s valve replacement program. The July 27 FPUD board meeting reallocated some of that amount for the purchase of backflow prevention devices.

“It’s just a project to maintain and upgrade some of the backflow devices,” Jack Bebee, general manager of FPUD, said.

The Fallbrook Public Utility District is in the process of replacing Automatic Meter Reading meters with Advanced Metering Infrastructure meters, and a July 27 FPUD board vote approved the purchases for the fifth year of the program.

The 5-0 vote approved $532,088.90 of purchases including sales tax for meters, encoder receiver transmitters, and antennas. The purchases will provide the district with 1,308 Badger meters of various sizes from National Meter and Automation Inc. for $320,785 plus sales tax and 1,301 Itron encoder receiver transmitters and antennas from Inland Works Water Supply Company for $173,730.50 not including sales tax.