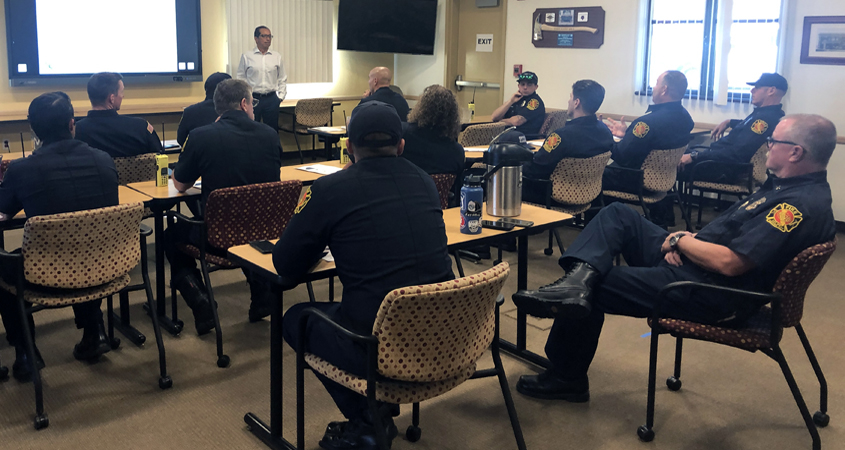 The National City Fire Department is learning more about the water system it relies on, thanks to some specialized training for firefighters from Sweetwater Authority staff.

Firefighters wanted to learn more about the water distribution system and where the city’s water originates. The department also wanted to review the location of Sweetwater Authority’s treatment facilities, pump stations, and learn about any areas of lower water pressure or dead-end hydrants.

The design of water distribution system facilities such as pipes, tanks, and pumps is dictated by fire protection requirements.

“The training provides the opportunity to work closely with National City Fire Department, providing detailed information about the water system we manage and operate,” said Snyder. “Through this training, stronger working relationships are formed, which improves the flow of information between agencies. When communities are served by local agencies working together collaboratively it gives our community a high level of service.”

Valdez said the training gave firefighting personnel specific knowledge of its city’s water system, ranging from an overall perspective of the water supply, to the specific design and operational details of its water facilities and how they impact firefighters ability to protect the community.

“A fire department equipped with good knowledge of the water system that knows how to effectively coordinate with Sweetwater Authority during routine and emergency events will be more effective in providing fire protection and safety for its customers,” said Valdez.

Ongoing communication with Sweetwater Authority personnel during an incident response can offer firefighters options to improve distribution system operations. Depending on the nature of the emergency, coordinated responses may range from system operation changes to the mobilizing of emergency power generations to keep facilities in service.

#ThrowBackThursday to the early 60s when the water district that would become ... Padre Dam broke ground on a project to bring imported water for the first time to the communities of Alpine, Dehesa, Flinn Springs and Harbison Canyon.

Water are you waiting for? Explore career opportunities in the water industry ... today: http://bit.ly/37mGuFf
#WorkForWater