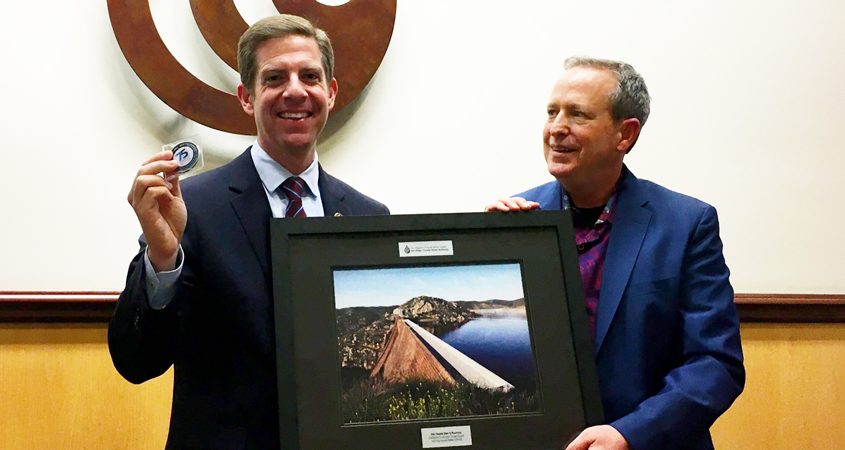 Rep. Mike Levin said California’s innovations and investments in water supply reliability and renewable energy are a model for the nation – and that the state’s efforts protect the environment while growing the economy at the same time.

Levin, an attorney and congressman from San Juan Capistrano, represents the 49th District, which includes, Encinitas, Carlsbad, Vista, Oceanside and a portion of southern Orange County.

He made his remarks November 6 during a Legislative Roundtable at the San Diego County Water Authority attended by water agency board members and staff, local civic and business leaders and Citizens Water Academy graduates.

“We need a diverse array of resources for water,” said Levin. “Water is a finite resource that we often take for granted.”

The Water Authority periodically holds Legislative Roundtables to hear about water-related issues in Washington, D.C. and Sacramento. More than 60 people attended the Wednesday event, asking Levin a variety of questions about water, energy and climate change.

In his first 11 months in office, he has sponsored and co-sponsored the following bills:

He introduced that legislation in July 2019 to raise the funding authorization in the Water Infrastructure Improvements for the Nation Act for desalination projects to $260 million.

California’s clean energy economy a ‘model for the nation’

He also said California has proven that a clean energy economy works to enhance environmental sustainability and jobs.

“We’re leading the way in California, and at the end of the day, we’ve developed a clean energy economy,” Levin said. “The state is a model for the country in how to protect the environment and grow the economy.”

Did you know Padre Dam currently imports all your drinking water? Most of our ...water comes from rivers hundreds of miles away, including the Colorado River. By creating new, local sources of water, we decrease our dependency on the Colorado River. http://ow.ly/Rgpm50KRJe6

Stop by our office tomorrow (7:30 AM - 12:30 PM) to donate to the @sdbloodbank ...blood drive. All donors will receive this nifty drought survival kit, graciously donated by @sdcwa! Sign up @ http://www.mysdbb.org/donor/schedules/zip. Walk-ins are welcome too!

🍁 Fall is here. Here are 10 water-saving tips to keep making the most of ...every drop this season. Which tip do you practice most often? https://bit.ly/3hXmQY5 #cawater #cadrought

The Helix Water District has received an $18 million loan from the U.S. EPA to support the Drinking Water Reliability Project. Helix will use the loan to expand water reuse opportunities & reduce the reliance on imported water. bit.ly/3Dr3GVP #cawater #WaterRecycling ... see moresee less

The Helix Water District has received an $18 million loan from the U.S. EPA to support water reuse projec...
view on facebook
· share

🍓 The San Diego County Farm Bureau named third-generation Oceanside farmer Neil Nagata its 2021 Farmer of the Year.“All the strawberry farmers that I know including myself, really care about the land, the fruit that we produce, and the people that work for us,” said Nagata. bit.ly/3xKN8ol #cawater #farmeroftheyear ... see moresee less

Neil Nagata is 2021 San Diego County Farmer of the Year

Third-generation strawberry farmer Neil Nagata was named 2021 Farmer of the Year by the San Diego County ...
view on facebook
· share