For the West this summer, the news about water was grim. In some parts of California, it didn’t rain for over 100 days. In western Colorado, the ground was so dry that runoff at first evaporated into the air. And in New Mexico and Nevada, the rains never came.

Bill Hasencamp is the manager of California’s Metropolitan Water District, which provides treated water to 19 million people. What was most unfortunate, he said, was that, “the upper Colorado Basin had a 100% snowpack, yet runoff was only 54% of normal.” In 2018, a variation happened — light snow and little runoff, which doesn’t bode well for the future.

The San Diego and Imperial Counties Chapter of the American Public Works Association recently recognized a San Diego County Water Authority pipeline relining project for its excellence as a public works project. The award commends the successful partnership between Water Authority staff, the contractor and local agencies working together to complete this critical repair to maintain the reliability of the regional water supply.

California’s water managers have had their hands full keeping our water systems safe and operational during the COVID-19 pandemic. But their work on addressing the fiscal consequences of the deep economic recession is just beginning. Three lessons from the Great Recession of 2007-09 could guide more effective policy responses today.

While Patricia Wood celebrates a top award in landscaping presented by her local water providers, there are probably more than a few disappointed gophers that are not singing her praises. Wood and a team of landscapers spent 2018 and 2019 transforming her 3,850-square-foot lawn, located along a cul-de-sac near Valhalla High School in Rancho San Diego, into drought-tolerant landscaping.

When wildfire strikes water, infrastructure that’s made out of plastic is particularly at risk of contamination. If pipes and tanks lose pressure, or get hot, chemicals can leach into the water supply. The CZU Lightning Complex Fire badly damaged seven and a half miles of water supply lines made of polyethylene, a plastic, in northern Santa Cruz County.

A rapid-fire review of potential fixes to the Friant-Kern Canal favors building a replacement canal for 20 miles alongside the existing canal where land subsidence has caused it to sag, severely restricting water flow, according to final environmental documents released Friday.

A House committee will meet Thursday to discuss the deteriorating public health crisis at a Southern California lake. The House Natural Resources Subcommittee on Water, Oceans and Wildlife will review federal and state efforts to address problems at the Salton Sea. The Salton Sea is California’s largest lake at about 350 square miles, fed by runoff from the crop fields of the Imperial Valley, an agricultural powerhouse. 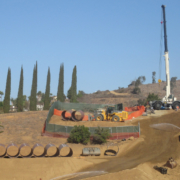 The San Diego and Imperial Counties Chapter of the American Public Works Association recently recognized a San Diego County Water Authority pipeline relining project for its excellence as a public works project. The award commends the successful partnership between Water Authority staff, the contractor and local agencies working together to complete this critical repair to maintain the reliability of the regional water supply.

Pipeline 5 was relined from the point of delivery with the Metropolitan Water District of Southern California to Sage Road in the Fallbrook and Rainbow communities in north San Diego County. The $24.7 million project was completed in July 2019 and relined approximately 12,300 feet of Pipeline 5, a 96-inch large-diameter regional pipeline.

Relining is a cost-effective method to repair pipelines and extend their service life with less impacts to the community and environment than if a traditional pipe replacement is performed. The relining process avoids digging up miles of pipeline, which would take significantly more time and resources, as well as impact associated streets and driveways for a long period of time.

“The Water Authority’s asset management program used an acoustic fiber monitoring system to help perform evaluations of the pipeline and prioritize this portion for rehabilitation,” said Jerry Reed, director of engineering at the Water Authority. “Our staff collaborated with stakeholders in Fallbrook, San Marcos and Rainbow, including staff at our member agencies and nearby residents to ensure project success.”

The project work areas were surrounded by residential homes and farms, heavily traveled public streets and a local retirement community.

Close coordination with multiple agencies ensured there were no impacts to water deliveries. Open communications with local residents regarding project schedule ensured no incidents occurred with local traffic.

The local APWA chapter chose the project based on criteria that included superb planning, efficient design and construction management techniques to complete the project on schedule, within a cost-effective budget and adherence to regulatory requirements. It was also judged on the degree it enhanced a public service or facility, the quality of community relations or actions to minimize public impacts, safety precautions taken to protect lives and property, environmental impact mitigation measures and other accomplishments under adverse conditions.

The company based in Orange was given a $280,399 contract for the Sagewood Road pipeline and a $301,734 contract for the Nella Lane pipeline. The two contracts were awarded on separate 4-0 votes with Helene Brazier abstaining from both.