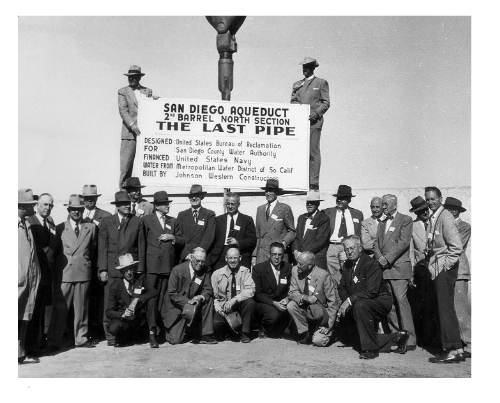 The final pipe of the new Pipeline 2 of the San Vicente Aqueduct was cause for celebration in 1954. Photo: Water Authority

Thanks to an intensive lobbying effort and consensus building by the San Diego County Water Authority’s first chairman, Fred Heilbron, the San Vicente Aqueduct’s second pipeline was constructed between 1951 and 1954.

The effort paid off when the second pipeline, parallel to and the same size as the first, began delivering water to the San Diego region. But even the doubling of capacity was insufficient to supply the growing population. The Water Authority had grown to 18 member agencies, and was four times the service area it had when it was originally formed ten years earlier in 1944.