Residents and businesses in unincorporated areas of San Diego County are eligible for increased water-use efficiency rebates under a new partnership between the County’s Watershed Protection Program and the San Diego County Water Authority.

The County’s new Waterscape Rebate Program will save money for residential, commercial, and agricultural customers who make landscape upgrades that improve the region’s climate resilience and reduce the flow of pollutants into waterways. 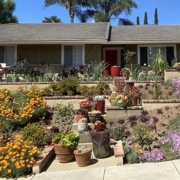 Residents and businesses in unincorporated areas of San Diego County are eligible for increased water-use efficiency rebates under a new partnership between the County’s Watershed Protection Program and the San Diego County Water Authority.

The County’s new Waterscape Rebate Program will save money for residential, commercial, and agricultural customers who make landscape upgrades that improve the region’s climate resilience and reduce the flow of pollutants into waterways. Sustainable landscapes produce multiple benefits for San Diego communities, such as reducing water use, enhancing habitat, increasing stormwater retention, and decreasing run-off.

The newly enhanced incentives include rebates that start at $3 per square foot for turf replacement, $60 per smart controller station, $65 per rain barrel and up to $450 per cistern. The agencies are also offering technical assistance to upgrade larger landscapes on multifamily and commercial properties, and a cost-share with agricultural growers to make water-saving upgrades.

Water customers in unincorporated San Diego County can determine their eligibility at: SanDiegoCounty.gov/WatershedRebates.

For the past 30 years, the Water Authority and its member agencies have promoted water-use efficiency through a variety of tools such as rebates, classes, and other resources available across their service areas. Landscaping upgrades are particularly important because more than half of all residential water use is outdoors. Some cities and water agencies in the region choose to increase the rebates like the County is doing for residents in unincorporated areas. Rebates, classes and incentives available to all residents in the San Diego metropolitan area are also at www.watersmartsd.org.

“Drought conditions across the West are a reminder of the importance of water-efficiency upgrades, and these rebates offer a great opportunity to get involved,” said Kelley Gage, Director of Water Resources for the San Diego County Water Authority. “With a WaterSmart approach, we can reduce water-use and maintain climate-friendly landscapes that help sustain our quality of life in San Diego County.”

The new partnership is part of the County’s new Waterscape Rebate Program, which helps to protect local waterways by reducing pollutants that enter storm drains. The program includes outreach and education to commercial, industrial, and residential properties in unincorporated areas of the county. In addition to the programs administered by the Water Authority, the County is offering programs with rebates for upgrades including rain gardens, gutters, permeable pavement, and regular septic system pumping.

“The County is committed to reducing stormwater pollution to help protect water and foster healthy communities,” said Scott Norris, Land Use Environmental Planning Manager at the County of San Diego. “Partnering with the Water Authority allows us to offer even more resources to help unincorporated residents and business owners upgrade their properties with incentives that can cover a large portion of the costs and actively contribute to protecting our waterways for everyone.”

To learn about how individual actions can promote clean water and healthier communities, and to take the “52 Ways to Love Your Water” pledge, go to: www.projectcleanwater.org/ 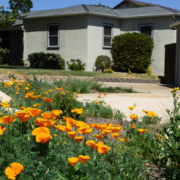 Note the height and width of plant species when they mature when choosing plants for new sustainable landscapes. Proper plant placement, taking into account the mature plant’s size, will limit the need for regular pruning, and reduce the amount of maintenance required over time.

While regular pruning and removal of dead plant materials is vital in our region for wildfire prevention, overly aggressive pruning harms plant health and doesn’t allow natural shapes to emerge.

Use the following spacing chart to help you figure out how many plants you need per square foot, based on the mature size of the plants. 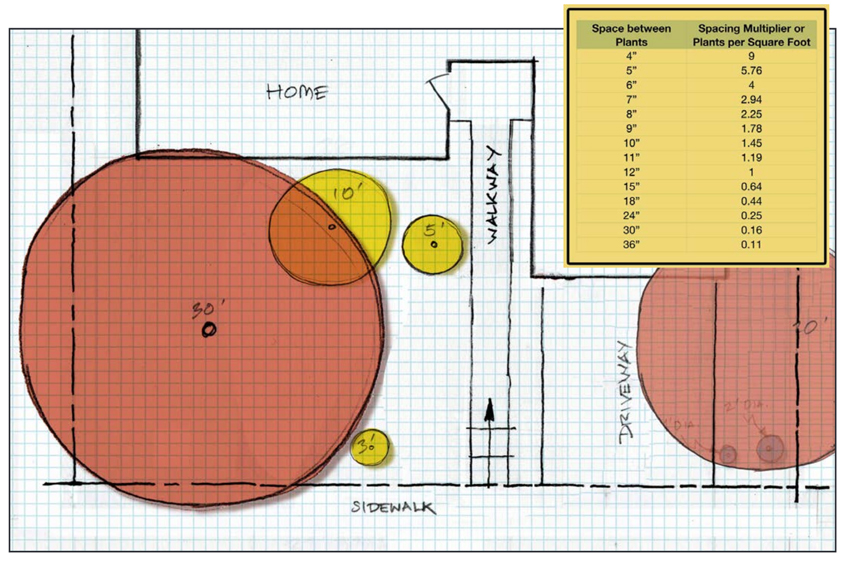 Space plants on your landscaping plan at their full mature size, not the size when you first plant them. Graphic: San Diego County Water Authority

Scale your plants at maturity

On your landscaping plan, use circles to note the size of every plant at maturity using a one-inch to four-foot scale. Use colored pencils to denote different water needs of the plants selected. It will make it easier to group plants into their proper irrigation zones (hydrozones).

Wide canopy trees that grow to 20 or 30 feet in diameter will significantly change the landscaping over time. Will this change the microclimates in the future? Consider whether a tree will cover a large section of landscaping with shade that is currently getting full sun. If plants that thrive in full sun are eventually covered in shade, the landscaping may need to be updated in time. 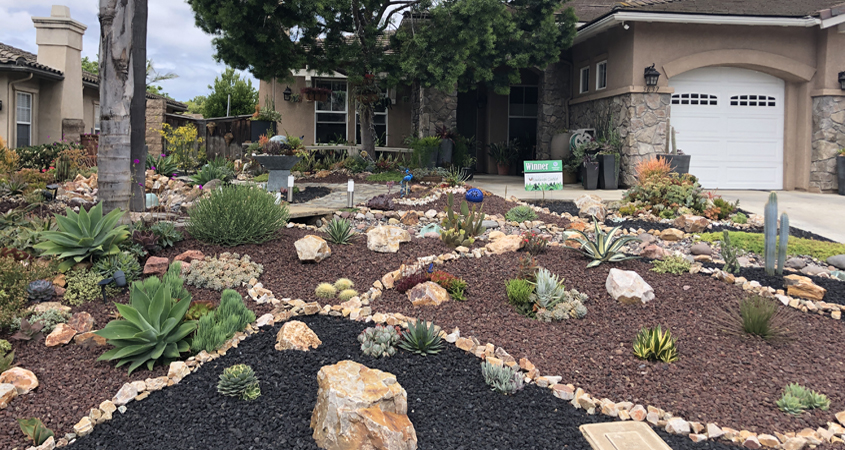 Planning for the amount of space your new plants will need when fully grown will help your landscape thrive. Photo: Sweetwater Authority

Select the smallest, healthiest plants possible, especially when choosing native plants. Once they are planted in properly prepared soil and watered wisely, small plants establish themselves more vigorously than plants raised in larger containers. Do not plant more than the space allows when the plants mature.

Take note of the root depth of plants when they are placed into the landscaping. Note the root depth on the plan. Trees will be irrigated less frequently, but for a longer period of time. Groundcovers with shallower roots require more frequent, shorter periods of irrigation. Keep these types of plants on separate hydrozones. Learn more about hydrozones

This article is part of a year-long series inspired by the 71-page Sustainable Landscapes Program guidebook. The Water Authority and its partners also offer other great resources for landscaping upgrades, including free WaterSmart classes at WaterSmartSD.org. 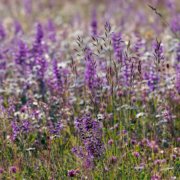 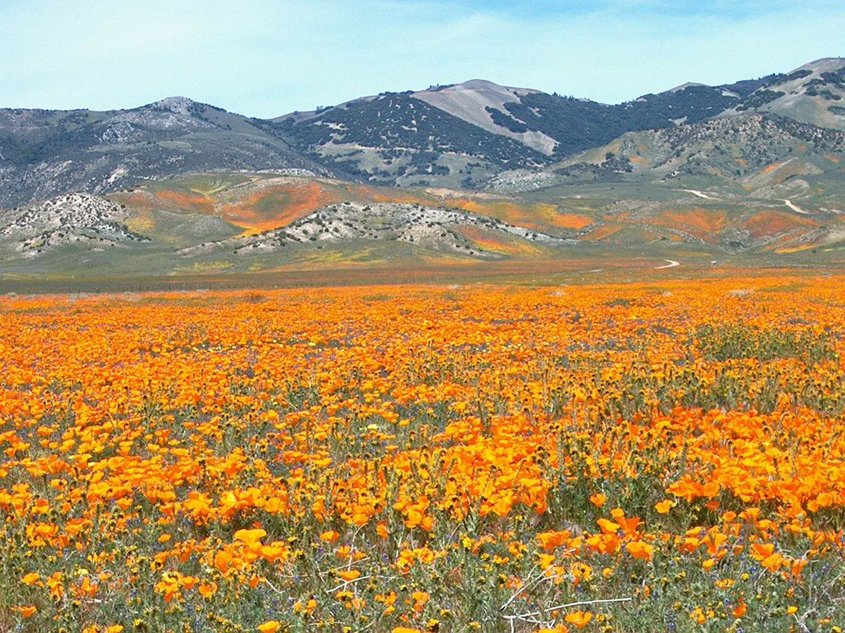 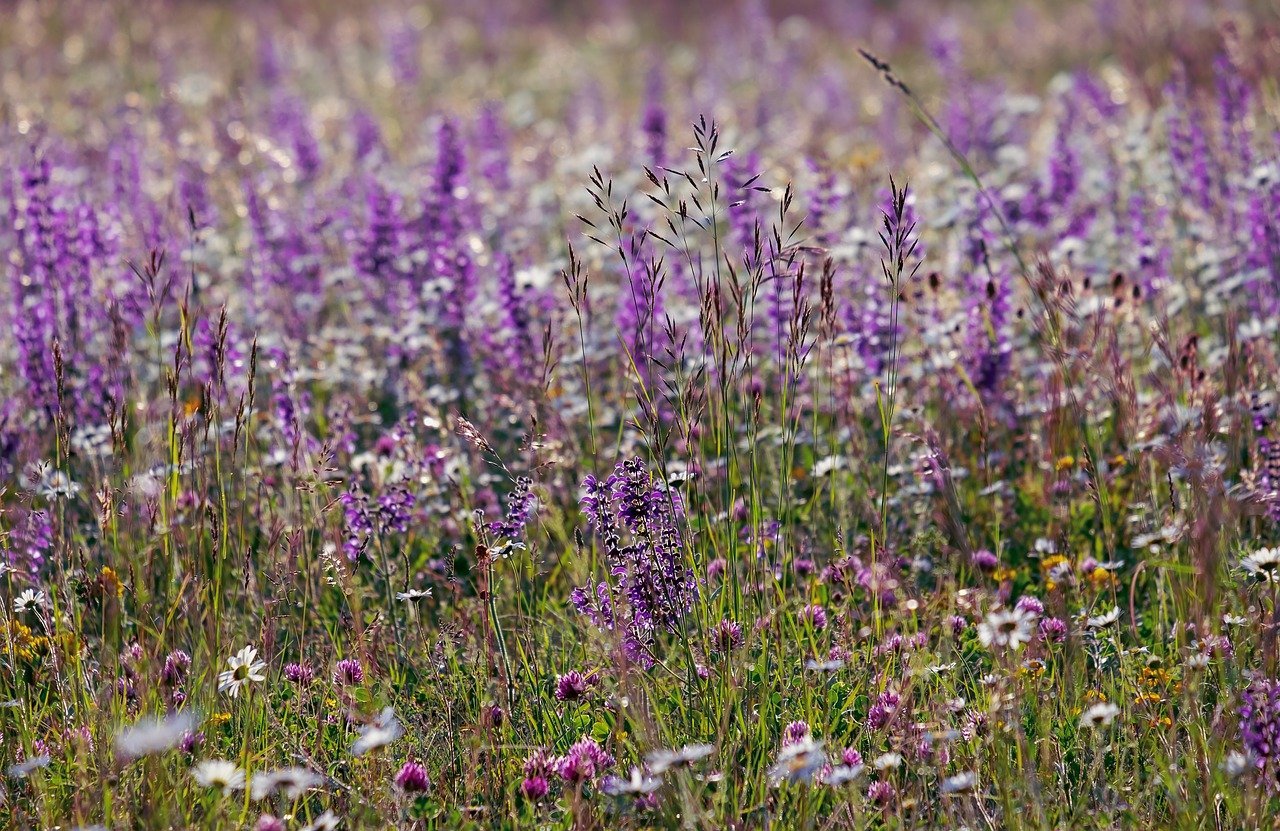 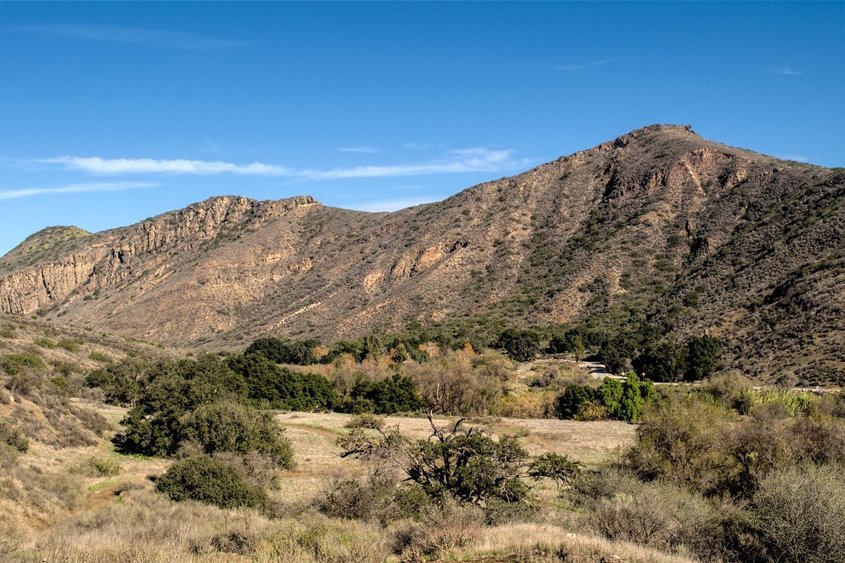 No matter whether their landscaping is just a few square feet alongside a front porch or estate acreage, thousands of San Diego County residents have learned to embrace sustainability as a central principle for creating and renovating their landscapes.

Thanks to financial incentives and educational resources offered by the San Diego County Water Authority to customers in La Mesa, Lemon Grove and El Cajon, a sustainable and beautiful yard is more attainable than ever before. 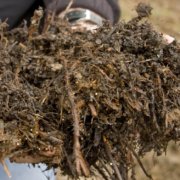 Even though temperatures rarely drop below freezing in most parts of Southern California, many people overlook winter when it comes to caring for their native plants and traditional landscapes. There are many things that can help keep landscapes healthy and water-efficient, especially during the winter months when there is more natural rainfall. One of these things is to use a layer of mulch to prevent water loss and insulate landscapes during colder times.

For maximum sustainability and to support plant health, use a locally sourced and blended organic mulch. If the goal is to create a walking trail or other area that is not intended to grow plants, consider a longer lasting wood mulch or inorganic mulch. Organic mulch may be available at low cost from local landfill recycling centers. For optimum soil and plant health, look for a mulch that has a blend of leaves, stems and woody portions of the plants. This type of blended mulch will break down over time and add organic matter to the soil to support natural biological processes, prevent erosion, maintain soil moisture and support water infiltration into the landscape. In addition, composted blended mulch has gone through a natural maturation process that kills weed seeds and pathogens.

Apply a layer of mulch three to four inches deep and remember to keep it at least four to six inches away from plant stems to avoid creating a condition that is prone to disease. In areas where the goal is to build the health of the soil, avoid using weed guard type fabrics. Pulling weeds and clearing debris also helps to increase the efficiency of mulch and removes hiding places for pests.

With a layer of mulch on your landscape, you can conserve water because the layer of mulch will help keep moisture in the soil – this is especially important because most plants grow deeper roots in the fall and early winter. Be sure to also manage your irrigation by setting your irrigation schedule seasonally, controlling overspray and fixing any other problems promptly.

Qualified Water Efficient Landscaper training is made possible by the San Diego County Water Authority, its member agencies and the County of San Diego.