The San Marcos Interceptor Replacement Project remains on schedule, with Phases 1 and 1A completed according to the Vallecitos Water District. The project replaces the District’s 1960s era 21-inch diameter sewer interceptor with more than 12,000-feet of 42-inch diameter sewer pipeline between Twin Oaks Valley Road and Pacific Street.

The Interceptor is a large trunk sewer pipeline receiving and conveying wastewater by gravity to the Encina Wastewater Authority. In Phases 1 and 1A of the project between 2002 and 2014, portions behind the Creekside Marketplace from State Route 78 to Grand Avenue, from Twin Oaks Valley Road to east of Johnston Lane, from Grand Avenue to Via Vera Cruz, and east of Johnson Lane to the south side of State Route 78 were completed.

Phase 2 will complete the remaining 3,400-feet of the westernmost project corridor extending from Via Vera Cruz to Pacific Street. The project budget is $8.5 million. The completion of Phase 2 of the Interceptor project has been in the works for more than 30 years, with the project exchanging numerous hands in planning, design, and construction.

“This is a milestone project for the District both in size and significance,” said Ryan Morgan, capital facilities senior engineer.

State of the art construction technology 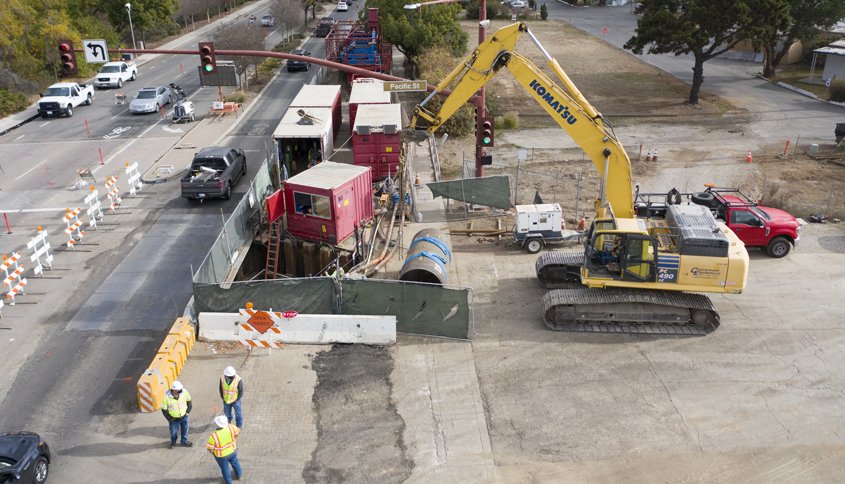 The MTBM is larger than 60-inches in diameter to be large enough to bore through native soils, rock, and backfill along the Interceptor alignment. The new tunnel’s wall is pressurized internally using hydraulic fluids before the steel casing is permanently installed. The MTBM is remote-controlled by an operator on the surface and is laser-guided to ensure it stays within the designed horizontal and vertical alignment (line and grade).

The MTBM’s high level of accuracy makes it especially useful when a project needs to avoid conflicts with existing underground utility lines, including a 16-inch diameter high-pressure San Diego Gas & Electric gas line in this project. The microtunnel installation was a 24-hour, 7-day-a-week process.

The microtunnel allowed the District to “thread the needle,” and the tunnel was completed in under a week (plus setup). There was no damage to any of the existing utilities in San Marcos Boulevard, and traffic impacts were minimized. 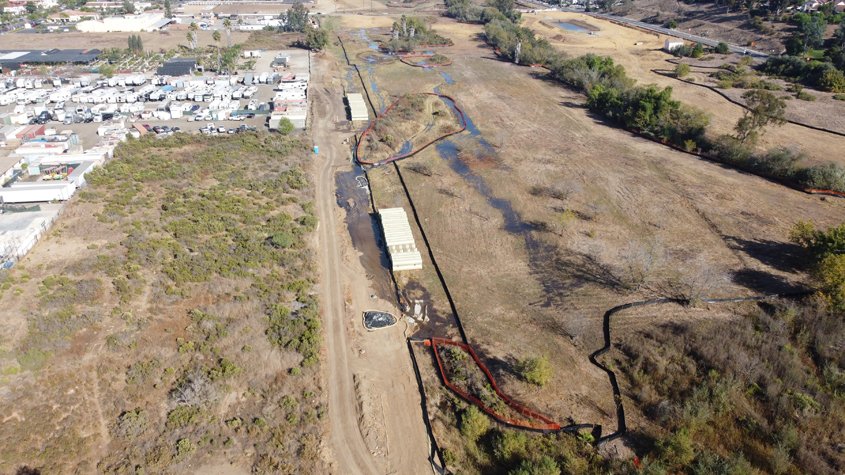 The final leg of the project will begin in the easements adjacent to the creek between Via Vera Cruz and McMahr. Construction completion is expected in June 2021.

This replacement project was originally identified in the District’s 1991 Master Plan and has been phased to be completed prior to City of San Marcos development of the Creek District.

Because Bay Area low-lying sewage treatment plants remain vulnerable to rising sea levels, government regulators told sewage facility managers to “provide a written plan for coping with SLR by the fall of 2021 – or they will be given a plan.”  The NBC Bay Area Investigative Unit reached out to 10 “at risk” sewage treatment plants to see those plans. All except one provided extensive documents of their proposals, the cost to address them, and even provided tours of completed work. San Francisco’s Public Utilities Commission replied to the Investigative Unit’s public records request that after a “diligent search for records…no records were found.” Other sanitary district officials were much more forthcoming about what they’ve already spent, what they’ve built and what they’re planning in the future to combat the rise in bay levels. All agreed seas are rising faster than expected.

A hyper-transmissible form of the coronavirus that causes covid-19 has been found in US sewer systems in California and Florida, confirming its widening presence in the US.

Buckets of dirty water drawn from sewer pipes near Los Angeles and outside Orlando starting in late January are among those in which genetic mutations shared by a so-called UK variant have been detected.

San Diego homes and businesses have been improperly charged for a program that keeps toxic sewer water from being discharged into the Pacific Ocean.

According to the City Auditor’s Office, many of the fees charged to industrial polluters have not been adjusted since 1984. The Public Utilities Department agreed to adjust the fees last year, but failed to do so, according to the San Diego Union-Tribune.

Wastewater could provide early, painless and localized data about the rise or fall of coronavirus levels.