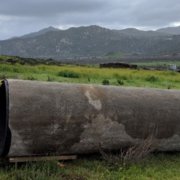 The American Public Works Association and American Society of Civil Engineers recently presented the San Diego County Water Authority with four awards for construction projects that exemplified outstanding skill, dedication and collaboration from staff in many departments. All of the projects were underway or completed during the COVID-19 pandemic, and project teams navigated shutdowns, adapted to health and safety restrictions, and overcame many other uncertainties – in addition to typical challenges encountered during construction projects.

With extensive coordination between the Water Authority’s Asset Management, Operations, Maintenance, Right of Way, Water Resources, Engineering and Public Affairs teams, the First Aqueduct rehabilitation project was completed in early 2021. Significant work had not been performed on the First Aqueduct since the completion of Pipeline 1 in 1947 and Pipeline 2 in 1954. The Operations and Maintenance Teams worked closely with multiple member agencies to ensure no impacts to water deliveries over the extended shutdowns required to reline both Pipelines. These extended shutdowns allowed the Asset Management team to inspect 27 miles of pipeline along the aqueduct using innovative technologies – the first time this had been done in nearly 75 years.

“Since the project included more than 35 work sites spread out over 15 miles, many in rural areas of the county, we collaborated closely between different departments and member agencies to ensure that water service was not disrupted,” said Emma Ward-McNally, Water Authority engineer.

This new facility replaced the existing Vallecitos 2/Vista Irrigation 1 facility that was built in 1954. The Water Authority’s Operations and Maintenance team worked closely with the Engineering team to develop a construction sequence to build the new facility while maintaining water service to member agencies.

“A meticulous level of detail in the design process allowed for the project to be completed with minimal changes during construction,” said Jim Zhou, Water Authority senior engineer.

The new flow control facility replaced the San Diego 12 flow control facility. The Water Authority’s Right of Way team worked closely with the City of San Diego to acquire property rights for the facility. During construction, electrical and rotating technicians from Operations and Maintenance provided support to ensure that the facility was constructed correctly and that electrical relay protection was coordinated when connecting to San Diego Gas & Electric.

“The new facility repurposed an existing building at the site, but it was forward-looking – the project included the installation of a second pipe train for a future inline hydroelectric turbine,” said Aaron Trimm, Water Authority senior engineer.

After nearby Pipeline 4 was repaired in late 2019, the Asset Management team inspected Pipeline 5 in early 2020, and found it needed repairs as well. Multiple Water Authority departments and teams collaborated to launch the emergency repairs on Pipeline 5, despite the uncertainty of the growing pandemic. The Engineering Contracts group executed five contracts and task authorizations for design, construction and inspection within a few weeks to make the project happen, and the work was completed in April 2020.

“The project was a true team effort that required collaboration from multiple departments to ensure that the emergency repair could be completed even as the region was shutting down due to the pandemic,” said Colin Kemper, Water Authority senior engineer.