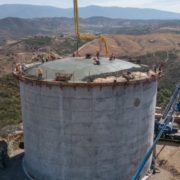 The project began with the demolition of an abandoned steel tank, and includes construction of an isolation vault and an underground flow control facility, in addition to the new 2.1 million-gallon water tank connected to the Valley Center Pipeline. The project is expected to be completed by November 2022.

The new Hauck Mesa Storage Reservoir will increase operational flexibility by balancing the flow of treated water between the agency’s first and second aqueducts as well as ensure water deliveries can be maintained even if power supplies are interrupted.

The walls of the new tank are about 60 feet tall, will be stained a forest green color to blend in with the natural landscape, and are made of prestressed, or wire wrapped, concrete. Construction Manager Emma Ward-McNally said that the prestressed technology “will maintain the tank walls in permanent compression, allowing the tank to accommodate seismic events while remaining watertight.”

Next steps for the project include the wire wrapping of the water tank, applying green-tinted shotcrete to the tank walls, installation of mechanical components within the flow control facility, system commissioning, and paving of the project site and access road.

Strategic infrastructure improvements by the Water Authority and its 24 member agencies are part of the regional effort to ensure continued delivery of water to support the region’s $240 billion economy and the quality of life for 3.3 million residents. As part of the asset management program, it is critical to actively replace and repair the Water Authority’s assets, which include pipes, valves, facilities, equipment, and other infrastructure.

The Water Authority will continue to work closely with the Valley Center community, Valley Center Municipal Water District, and nearby homeowners to minimize short-term construction impacts.

The city of Escondido is moving forward with plans to replace the Lake Wohlford dam, a structure built of earth and rock that has stood at its present location since 1895.

Lake Wohlford is about 5 miles northeast of downtown Escondido, just beyond city limits in the unincorporated area of San Diego County, and the dam is owned by the city. The lake has long served the city both as a recreational asset for boaters and fishing enthusiasts, and as an emergency storage reservoir to supply drinking water in case of a drought.

Escondido, which means “hidden” in Spanish, is working to further improve a few industries in one of the San Diego County’s oldest cities.

The City of Escondido is using a reverse osmosis plant to clean and treat water that will get sent to agriculture in San Diego’s north county.

They hope to continue treating the water so that in the future it becomes potable.

Last week Escondido’s Wastewater Treatment Plant Operator, Carrie Selby was featured as the Water Utility Hero of the Week by the San Diego County Water Authority SDCWA. Shelby was interviewed for the Water News Network and talked about her career and work life during the pandemic. 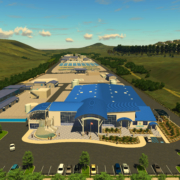 The San Diego County Water Authority has helped secure nearly $470 million for local supply projects in the past several months in collaboration with member agencies, including the total of $115 million for the East County and City of Escondido projects. Both projects will increase local water supply reliability and reduce future demands on imported water supplies.

“Kudos to our member agencies for their strong applications and to MWD’s Board of Directors for approving them,” said Water Authority Board Chair Jim Madaffer. “It is an affirmation of our ongoing efforts to collaborate with MWD and to address shared challenges.”

The East County AWP will be one of the first potable reuse projects in California to use new reservoir augmentation regulations. The program will meet up to 30% of East County’s drinking water demands, almost 13,000 acre-feet of water per year, and eliminate the discharge of 15 million gallons of partially treated wastewater into the Pacific Ocean.

The AWP uses four advanced water purification steps to produce water that is near-distilled in quality. After treatment, purified water will be blended with water in Lake Jennings and treated again at the R.M. Levy Water Treatment Plant before being distributed as drinking water.

This program is a collaborative partnership between Padre Dam Municipal Water District, the County of San Diego, the City of El Cajon and Helix Water District.

The Membrane Filtration Reverse Osmosis Facility in Escondido would provide up to 3,280 acre-feet per year of advanced treated recycled water to irrigate farms.

The project includes the construction of an advanced recycled water treatment facility with microfiltration and reverse osmosis, new pipelines, and a storage and blending tank to convey water for agricultural irrigation. Source water for the project is treated recycled water from the Hale Avenue Resource Recovery Facility. Escondido will own and operate the project and plans to deliver water by 2023.

In the past several months, the Water Authority has helped member agencies secure three other Local Resources Program agreements to fund water supply projects that increase local supply and reduce reliance on imported water. Those projects are:

On Wednesday, May 27 the San Diego County Water Authority welcomed Escondido Deputy Mayor Consuelo Martinez as its newest board member. The deputy mayor was sworn into the role via a Zoom call from her office.

The California Water Environment Association has named of Escondido Water Quality Lab Associate Chemist, Oyuna Jenkins as their Laboratory Person of the Year. Jenkins plays a key role in the lab’s safety processes, which ensures a safe and reliable water supply for City customers.

Escondido is one of only two California labs already compliant with the draft regulations, which require more stringent quality controls.

It’s a tough gig being a western grebe during this water bird’s courtship season. To get noticed these birds must literally walk on water.

This elaborate courtship ritual, known as rushing, is now happening at Lake Hodges near Escondido where huge numbers of Clark’s and western grebes flock during the winter and spring breeding season. 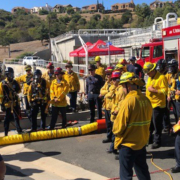 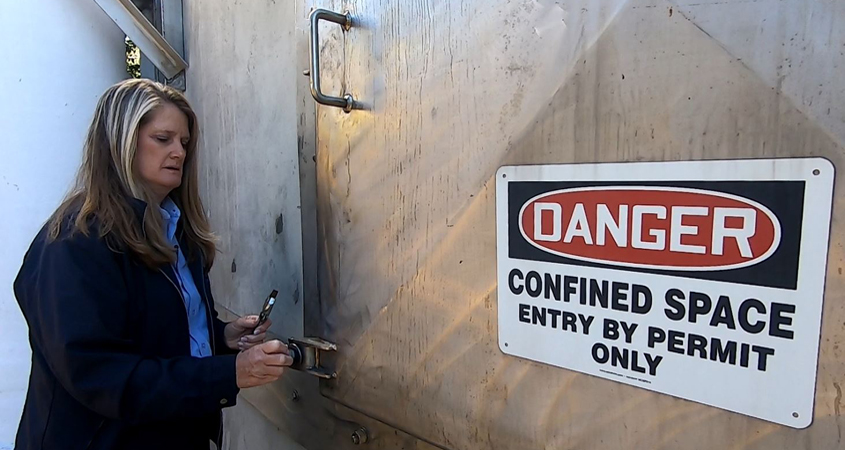 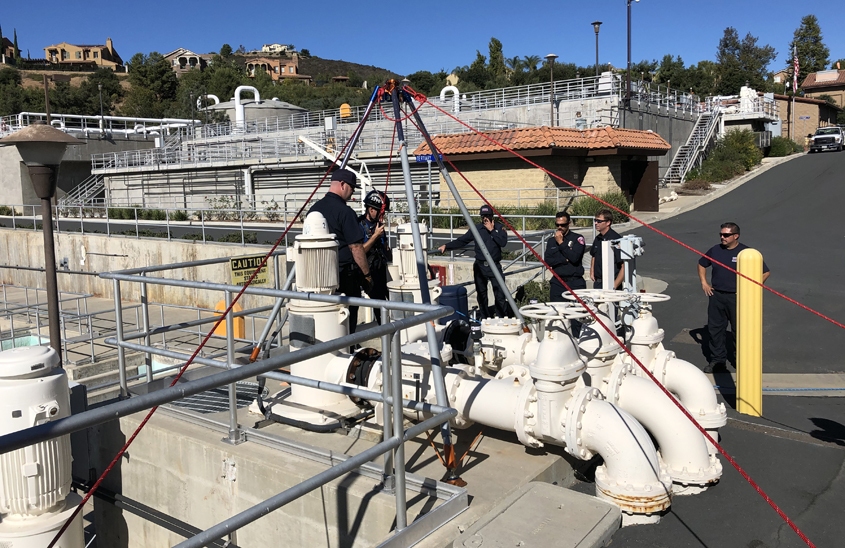 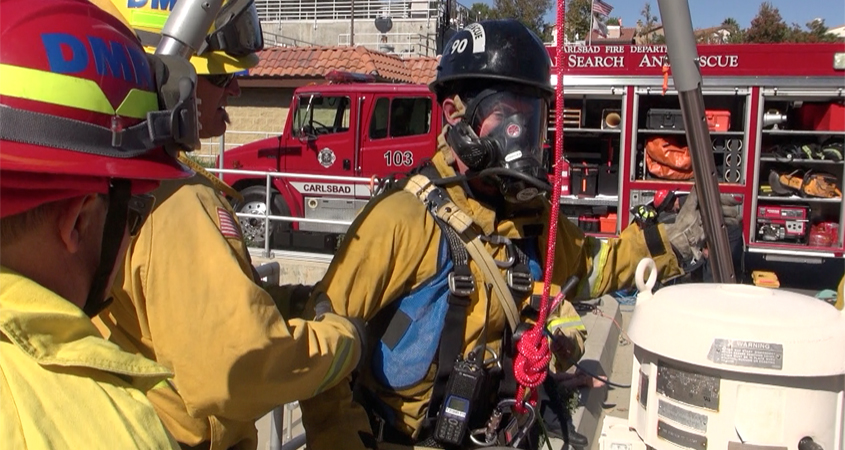 Edwin McBride decided 20 years in the U.S. Navy wasn’t enough time in the ...water, so he dove into the SkillBridge Program to intern at the San Diego County Water Authority. Read his story & learn more about the program: https://bit.ly/3bJJVx1 #cawater #PublicService #WorkForWater

Mike & Cathy Godfrey’s water-efficient landscape design is the winner of ...the Olivenhain Municipal Water District’s 2022 WaterSmart Landscape Contest. Check out the before and after photos and learn how to transform your yard: https://bit.ly/3I0avxR #cawater #watersmart

Edwin McBride decided 20 years in the U.S. Navy wasn’t enough time in the water, so he dove into the SkillBridge Program to intern at the San Diego County Water Authority. Read his story & learn more about the program: bit.ly/3bJJVx1 #cawater #PublicService #WorkForWater ... see moresee less

U.S. Navy veteran Edwin McBride is trying on a new job for size after 20 years working on the water, he's...
view on facebook
· share

Mike & Cathy Godfrey’s water-efficient landscape design is the winner of the Olivenhain Municipal Water District’s 2022 WaterSmart Landscape Contest. Check out the before and after photos and learn how to transform your yard: bit.ly/3I0avxR #cawater #watersmart ... see moresee less