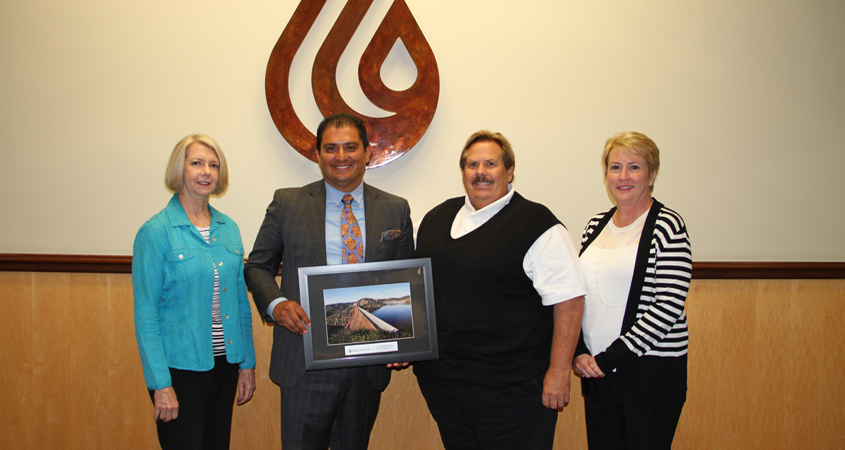 “San Diego is really a model in the state,” Hueso told an audience of about 90 water agency representatives, business and civic leaders and other stakeholders from around the county who attended the morning event. “San Diego leads the state in conservation. How we’re able to manage the system without an increase in the growth of consumption is just amazing. It’s just a testament to the great minds and people that we have managing our system, ensuring that we continue to have water … given the enormous challenges we have in providing for San Diego compared to other parts of the state.”

The Water Authority regularly hosts roundtables to hear from elected officials about water issues and other important developments in Sacramento and Washington, D.C., and to promote collaboration with civic, business and elected leaders in ensuring continued water supply reliability for the region.

“We’re so pleased Senator Hueso could join us today because he plays such an important role in water issues and water plays such a critical role in our region,” said Mark Muir, chair of the Water Authority’s Board of Directors. “Senator Hueso has been a true champion in protecting important independent water supplies for San Diego and has always been willing to work closely with us to balance all the important interests related to those water supplies.”

Hueso has been a leader on water issues since he was elected to the state Senate in 2013. He  chairs the Senate Committee on Energy, Utilities and Communications, and he also sits on the Natural Resources and Water Committee. His 40th Senate District includes cities in south San Diego County, the southern portion of the City of San Diego, and all of Imperial County. A former San Diego City Councilmember, Hueso was elected to the state Assembly in 2010 and previously chaired the Assembly Water, Parks and Wildlife Committee.

Drought or no, water remains an important topic in the nation’s largest state, creating a complex challenge for policymakers. “It gets complicated when you consider that our water policy in California started in 1848 before our state was even formed with the Treaty of (Guadalupe) Hidalgo – the treaty with Mexico,” Hueso said. “There was actual language in that treaty that was aimed at protecting property rights and water rights for the people that owned property back then. And those water rights still apply.”

While those complexities can create division, they also create opportunity for bipartisan solutions. “The most important things that we’ve done in the state of California have been bipartisan,” Hueso said. “And that has taken effort. It has taken effort on both sides to come to a common ground and say we’re going to agree to do what’s in the best interest of the state in general. And when there has been an urgent matter facing the people of California, both sides have come together to forge relations and form solutions that truly help everyone.”

How that will play out in the Sacramento-San Joaquin Bay Delta is still unclear, even as the state pursues a $17 billion project called California WaterFix that involves routing water underneath the Bay-Delta in twin tunnels.

A sense of urgency at the Salton Sea

Salton Sea restoration – a legislatively mandated responsibility of the State of California – is another priority for Hueso.

“My focus is set on how do we solve this problem, what’s the best vehicle, and how can we do it in a way that still takes care of the public funds,” he said. “We have to be mindful of how to spend this money because we don’t have a lot of it. We have to stretch every penny, stretch every dime, and there’s really little room for error. And that’s how I think we need to proceed.”

Then he added: “I really believe in creating an agency that is going to focus on solving this problem. We really need an agency that has a sense of urgency.”