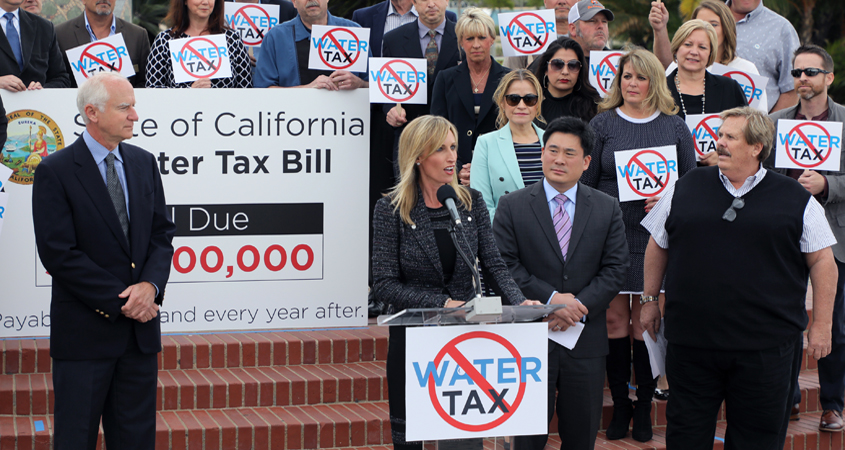 Due in part to vigorous statewide opposition by a coalition of business, civic, and water industry officials, a proposed $135 million per year tax on drinking water in California has failed to advance in the state Legislature. But opponents of the bill said their victory should be considered temporary, and the anti-water-tax coalition in San Diego County remains on alert for attempts to revive the proposal.

In June, the legislative Budget Conference Committee failed to approve a Brown Administration budget trailer bill that included the water tax, and the trailer bill was not a component of the final state budget package passed by the Legislature on June 14. The proposed drinking water tax would have raised about $135 million a year to help provide clean, safe water in disadvantaged communities, mostly in the Central and Salinas valleys, where groundwater has been contaminated by farming operations.

Tax proponents are likely to renew their efforts to advance another water tax proposal in August, the final month of the legislative session. Several legislative vehicles could allow them that opportunity.

Regional leaders in San Diego understand the need to improve water quality in poor, rural areas of the state. However, they say that should be done without adding another tax burden to residents who live in one of the nation’s most expensive states. They have also said the tax undermines access to the very thing it aims to support – clean water – by making it more expensive.

In addition, there is a major concern with the lack of administrative infrastructure – including appropriate managerial, technical, financial, and operational expertise – within the communities and regions suffering from poor groundwater quality. Without the appropriate governance structure or administrative infrastructure in place to make lasting improvements, the proposed water tax will not provide a lasting solution.

There are other ways to help boost access to clean drinking water statewide. Assembly Bill 2050 offers a more systemic, long-term approach. AB 2050 would authorize the creation of small system water authorities that will have powers to absorb, improve, and competently operate noncompliance public water systems.

Co-sponsored by Eastern Municipal Water District and the California Municipal Utilities Association, AB 2050 approaches the challenge of unsafe and undrinkable water sources within disadvantaged communities in a more methodical and well-structured manner, acknowledging the need to first improve service delivery infrastructure and governance structure of failing and noncompliant water systems as a condition precedent to any broader funding solution such as a water tax.