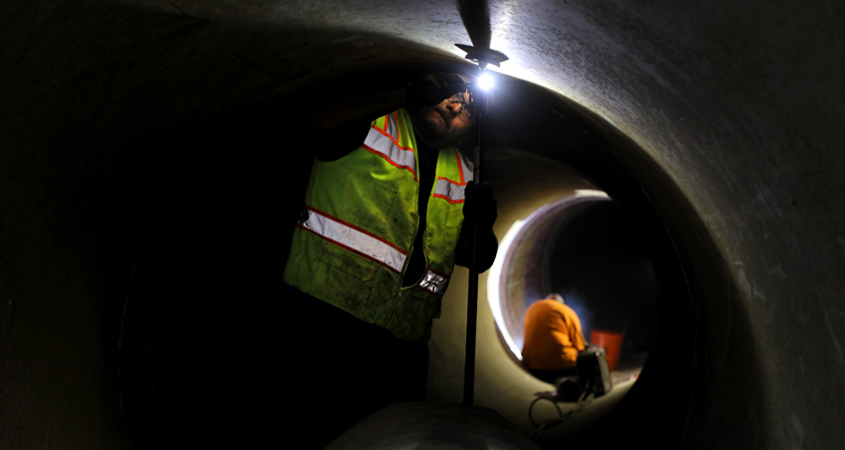 Once the liners are installed, they are welded together, grout is injected to fill the space between the liners and the original pipe, and cement mortar is applied on the inside of the steel liner. Photo: Water Authority

The Water Authority deployed a multi-faceted response, using high-tech asset management tools to identify pipeline sections with the greatest risk of failure and a targeted pipeline relining strategy that minimizes community impacts during construction. The agency’s relining program started in the 1980s and ramped up in the early 2000s.  Today, it is on track to complete more than 45 miles of relined pipeline in the next few months.

The current project is taking place deep below the urban streets of La Mesa, California, where the Water Authority and its contractor, L.H. Woods & Sons, Inc., are on schedule to conclude by summer. The delicate, 4.3-mile operation started in September 2017 after years of cross-departmental preparation to ensure the work on the $28.6 million contract could be completed in a cost-efficient fashion without impacting water deliveries. Instead of trenching and removing the old pipe, crews excavate 13 entry portals at strategic points, then insert steel liners into the pipeline using a specially designed cart. When the pipe installation work is done, the portals are backfilled, the streets are repaved, and the pipeline is put back in service for at least another 75 years – at about half the cost of a conventional pipeline replacement project.

Looking for weak spots in system

To identify sections of its 310-mile large-diameter pipeline system that require relining, the Water Authority relies on a suite of high-tech monitoring tools that are part of its pioneering asset management strategy.

Weak spots are often first detected with a “PING!” indicating a snapped steel wire in the PCCP. That sound is relayed through acoustic fiber optic cables – installed as an early warning system inside pipelines – so that Water Authority staff can be alerted by email and cell phone. Each ping is matched with results from Remote Field Eddy Current assessments and visual inspection data, then mapped using Google Earth.

With that information, pipeline segments are plotted on a risk matrix showing the condition and impact of failure. The sections with high risk and high consequence of failure are prioritized for upgrades. On occasion, emergency repairs are required where failure is imminent and the risks are significant. Other, less risky sections continue to be monitored and managed to maximize their service life. This risk-based approach has allowed the Water Authority to avoid more than $200 million in infrastructure spending.

Planning for the current project started in 2011. The long lead time was necessary, in part, to coordinate with two of the Water Authority’s retail member agencies that would not be able to take water deliveries from the pipeline when it was down for upgrades. Local or stored supplies in surface water reservoirs could be used in case they were needed during the project.

During the design phase, Water Authority staff also identified environmental resources requiring protection and mitigation measures. For instance, noise impacts need to be addressed during construction with the installation of large wooden sound walls around work sites. In addition, the plan included with silt fences, fiber rolls and street sweeping to protect nearby waterways from storm water runoff. In addition, an environmental monitor routinely assesses the contractor’s compliance with environmental commitments. 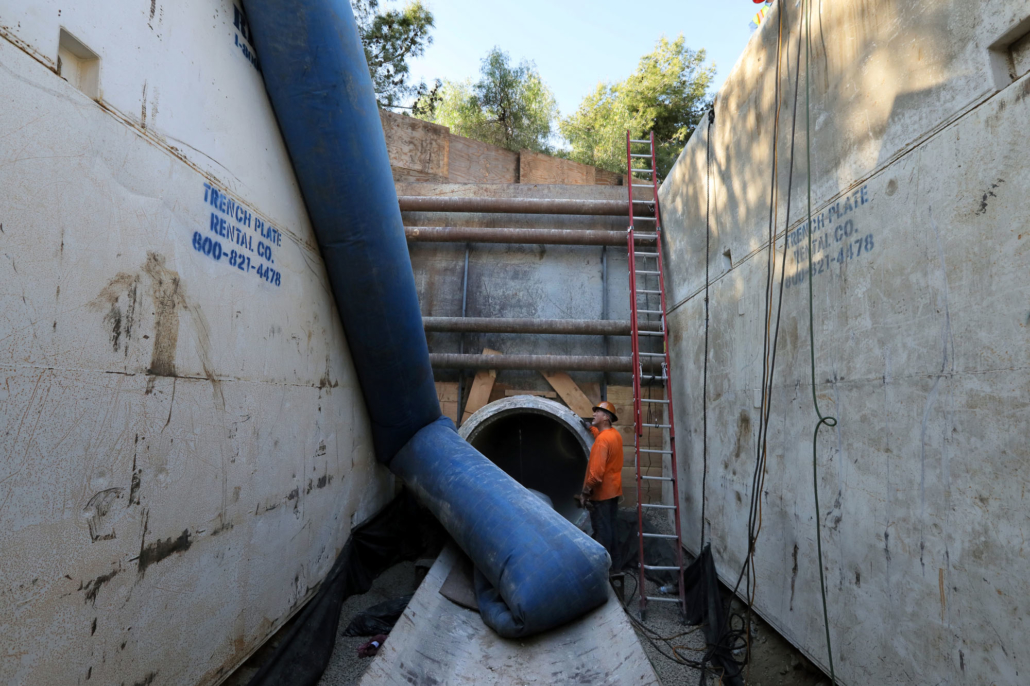 Relining is often an elegant solution to pipeline deterioration, but it’s not a simple one. The Water Authority’s solution is to use multiple portals, or entry points, to access sections of the pipeline at strategic spots. The footprint of each of the 13 portals for the current project is approximately 25 feet by 60 feet. Photo: SDCWA

Relining is often an elegant solution to pipeline deterioration, but it’s not a simple one. Crews can’t just insert a single 4.3-mile-long steel liner, partly due to curves and changes in elevation along the route. The Water Authority’s solution is to use multiple portals, or entry points, to access sections of the pipeline at strategic spots. The footprint of each of the 13 portals for the current project is approximately 25 feet by 60 feet. When accounting for laydown, staging and other related work areas, the project encompasses 12.5 acres.

Once the liners are installed, they are welded together, grout is injected to fill the space between the liners and the original pipe, and cement mortar is applied on the inside of the steel liner. To complete the work, new 20-foot sections of the pipe are installed – reconnecting the pipeline through each portal. Then, the portal areas are backfilled, and the portals are returned to like-new condition.

While construction crews carry out that work, the asset management team stays on mission by using removed pipe to perform destructive load testing of pipe sections. On the current project, testing showed steel relining can withstand advanced deterioration of the outside pipe – helping to confirm that steel liners can last at least 75 years.

While the number of portals in the current project was reduced, construction activities remained significant for several months in the highly urbanized area. Four portals were in a four-lane road, temporarily reducing traffic to one lane in each direction. Additionally, two portals were adjacent to major retail parking lots, and six others were less than 100 feet from homes.

From design through construction, the Water Authority conducted significant public outreach, including open house events for neighbors to meet agency staff; distribution of postcards and doorhangers to thousands of neighbors; and the development of “Open During Construction” signs for retail centers. This proactive outreach kept stakeholders engaged with project activities, helping to reduce complaints and resolve issues quickly.

When the current relining project wraps up this summer, the Water Authority will have relined more than half of its pre-stressed concrete cylinder pipelines – a critical part of the agency’s commitment to ensure a safe and reliable water supply that sustains a $220 billion regional economy and the quality of life for 3.3 million residents.