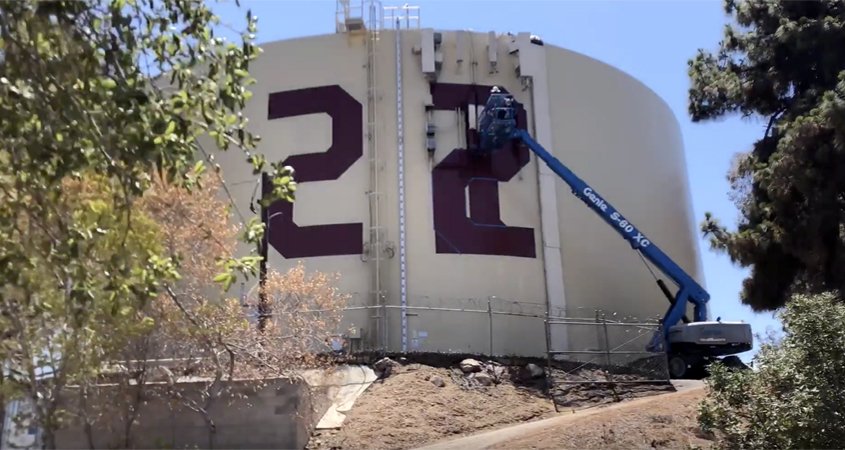 Although the Fallbrook Public Utility District water storage tank uphill from South Mission Road has received a fresh set of painted numbers annually for 35 years, this week’s update was the most anticipated makeover ever.

FPUD crews change the painted numbers on the tank to reflect the year incoming seniors will graduate at Fallbrook High School. A three-person team made up of district employees Matt Lian, Colter Shannon, and Toby Stoneburner recently painted over the “21,” changing it to “22” to welcome the graduating class of 2022.

It took the team five hours to paint the 25-foot-tall numbers onto the 3.6 million-gallon tank, compressed through the magic of time-lapse video to under 30 seconds.

“Parents and Fallbrook High seniors anxiously await the painting of the tank and begin calling the office early in June to find out when we’re doing it,” said Noelle Denke, FPUD public affairs officer. “This year, it’s especially exciting for them because they’re going back to campus and need something to look forward to.”

The reason for the annual external makeover dates back 35 years. Before the district started painting the tank, Fallbrook High seniors took on a longstanding dare. They would climb up the hill in the middle of the night, scale the tank and then paint it themselves.

Since it’s a long way down, FPUD staff became concerned for student safety. Workers installed a fence at the time to prevent access by the annual stealth painting crew.

But it didn’t deter the energetic students. Instead, they just began jumping the fence in the middle of the night. So district officials struck a deal with the students. If they would stop risking their safety for the dare, FPUD would safely paint the tank every year to commemorate them. 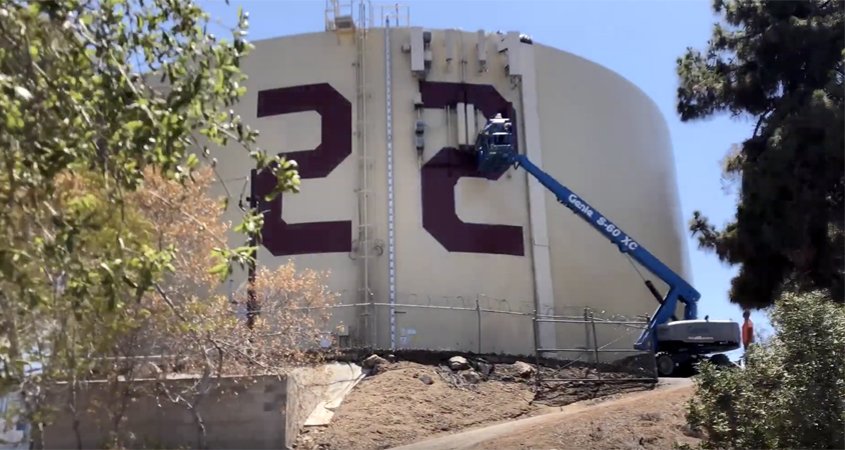 The annual painting for the Class of 2022 began due to safety concerns. Photo: Fallbrook PUD

Since the tank shares the space with several cell towers, Fallbrook Public Utility District makes arrangements to power down their towers. Then crews safely hoist themselves up to the tower and get to work painting.