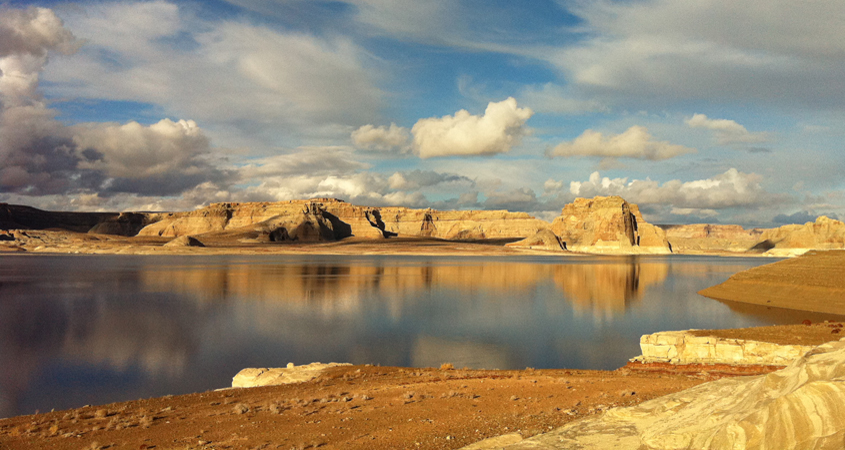 Lake Mead and Lake Powell – which provide storage for the Lower Basin states of Nevada, Arizona and California – are about 51 percent full. Photo: Water Authority

El Centro, Calif. – U.S. Bureau of Reclamation Commissioner Brenda W. Burman delivered a sobering message about the risks facing the Colorado River system and the need for action considering long-term drought conditions during an Imperial Irrigation District Board meeting on May 22.

In her first presentation to the IID Board of Directors since her confirmation as commissioner in November, Burman said it’s time to restart the stalled basin-wide drought contingency planning talks to address the threat of shortage on the river. Her discussion was filled with stark predictions for the river system should drought conditions continue, along with hopeful notes that worst-case shortage scenarios could be averted through conservation efforts.

Terry Fulp, the bureau’s regional director of the Lower Colorado River Basin, joined Burman at the IID meeting. Fulp said Lake Mead and Lake Powell – which provide storage for the Lower Basin states of Nevada, Arizona and California – are about 51 percent full.

Both lakes were near capacity in 1999, then dropped by half in just five years. That sudden loss of storage led to the development of the interim guidelines for managing a shortage on the river in 2007. In the years since, Fulp said, the river system has met demands despite the ongoing drought.

However, a shortage declaration may be triggered in the next two years because Lake Mead is barely over 1075 feet above sea level, the point at which a shortage could be declared. Fulp said Lake Mead would likely already be below the 1075-foot mark if not for conservation efforts across the Colorado River Basin.

Call to action on the river

Burman said she recognizes that drought contingency discussions have “fallen off,” but she said they need to start again with the goal of expanding conservation efforts throughout the river system. She said actions taken now will benefit water users today and serve the needs of the river system decades into the future, just as water users today benefit from the actions of the pioneers who built the system under the Boulder Canyon Act of 1928

“There absolutely needs to be action on the Colorado River,” she said. “The risk is too great.”

Under questioning from IID board members, Burman said “there is room” in drought contingency discussions to include additional storage for IID in Lake Mead (which IID has advocated for), and there could be flexibility in how that storage water is created.

When pressed on the Salton Sea, Burman said a memorandum of understanding between the state and federal governments remains in effect to address issues at the sea. She added that the federal government remains committed to the MOU even though the state is leading ongoing Salton Sea restoration efforts.

Burman said time will tell if drought contingency talks restart and whether agencies can reach agreement on the critical issues related to conservation and storage. To the extent that there is additional water conservation in the Imperial Valley, that likely would reduce flows to the Salton Sea – and that in turn would raise important questions about how reduced inflows would be mitigated to minimize impacts on sea levels.

💧 ...Ripping Out His Lawn Made Him a Native Plant Fanatic

💧 Opinion: What Will Happen to the Colorado River? What We Know About Looming Water Cuts