You are now in Conservation Corner Education Features category. 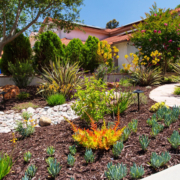 While not all the targeted turf has actually been removed, post-class surveys show that many participants end up taking out more turf than they initially planned after seeing the benefits of their work, said Joni German, who coordinates the Water Authority’s award-winning WaterSmart Landscape Makeover Series.

“Because we give people the skills and the confidence to do this, they often go on to convert turf in another part of their yard,” she said.

In the past five years, 947 people have completed the WaterSmart class series, which includes identifying turf areas for replacement with low-water use landscaping. Participants work one-on-one with local landscape architects to complete design and irrigation plans.

The Water Authority then compares estimated total water use for each homeowner before attending the four-class series, and after implementing a sustainable landscaping plan. In total, participants have identified more than 1 million square feet for conversion.

“We have documented about a 33 percent water savings in those plans,” said German. “The total water savings realized from removing 1 million square feet of turf is equal to 36.5 million gallons per year, or 112 acre-feet annually.”

One acre-foot is approximately 326,000 gallons, roughly enough to serve 2.5 typical Southern California families of four for a year. 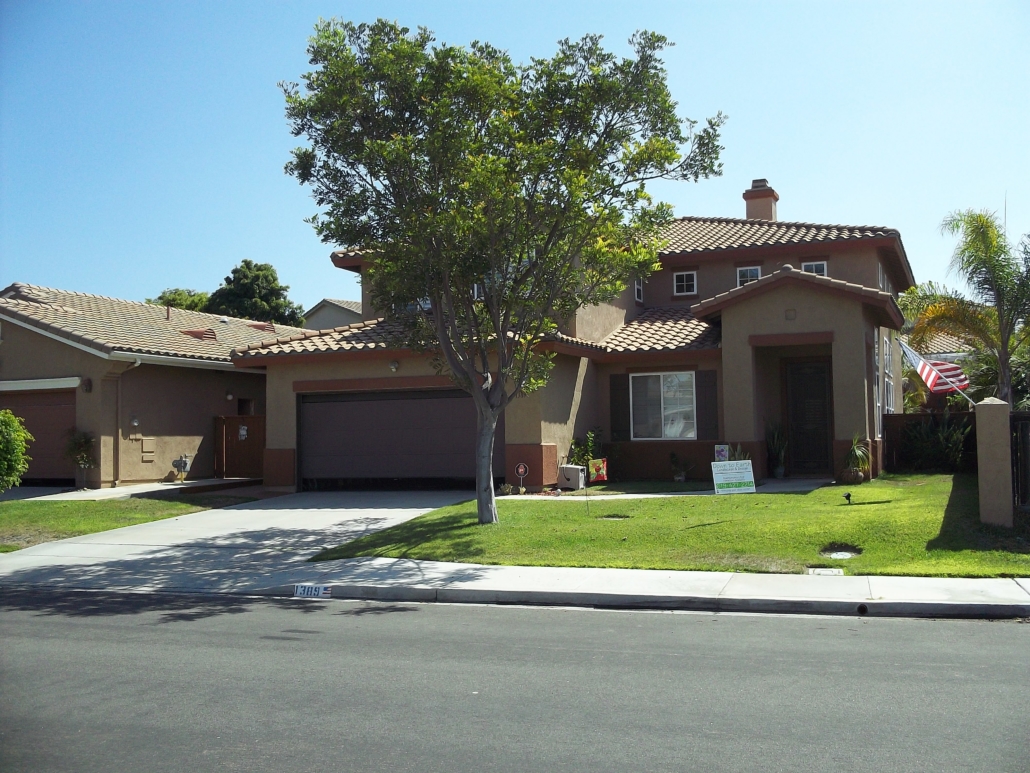 The National Resources Defense Council said California homeowners are leading the transition away from lawns, which is expected to continue for more than a decade nationwide. And there is a long way to go: Lawns currently cover up to 50 million acres of land in the United States, consuming three trillion gallons of water each year, according to NRDC. 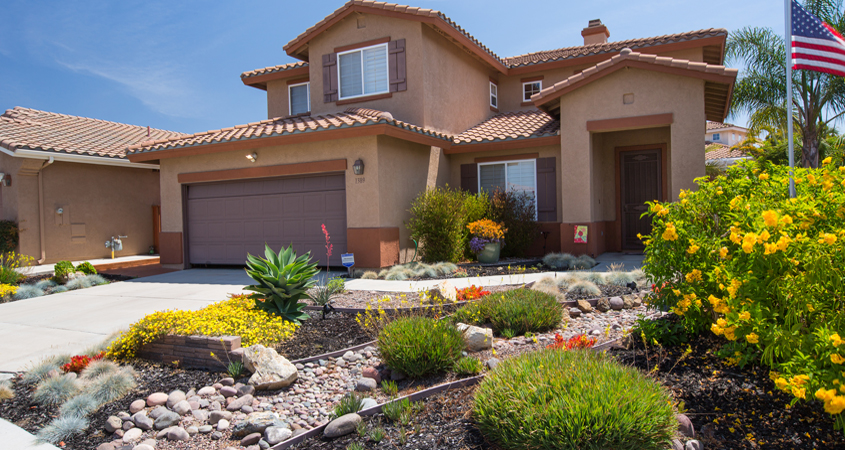 The same residence after its makeover to a sustainable landscape design. Photo: Water Authority

“Homeowners don’t know where to start,” said German. “They think they have to create a rocks and cactus landscape. Our program reflects a WaterSmart landscape for the San Diego lifestyle.

“In the course, we explain that we live in one of the most desirable climates on earth. People come and vacation here for our climate. We deserve beautiful, lush, colorful, thriving landscapes – and we can have them. They can be water-efficient, too,” said German.

German said the combination of course lectures, hands-on assignments, and support from landscaping professionals makes the classes highly practical. “We get participants to think about their lifestyle and take them down the path that gives them the skills and knowledge to actually implement their own landscape plan.”

Each class series is limited to 25 participants. Experts visit each homeowner’s proposed project area prior to the first class. They take measurements, locate irrigation heads, and produce a CAD drawing for homeowners to use in the class.

“With the help of local landscape professionals, homeowners create planting plans and irrigation plans specific to their project areas. They are either ready to implement the plans themselves, or work with a contractor to tell them what they want done,” said German. 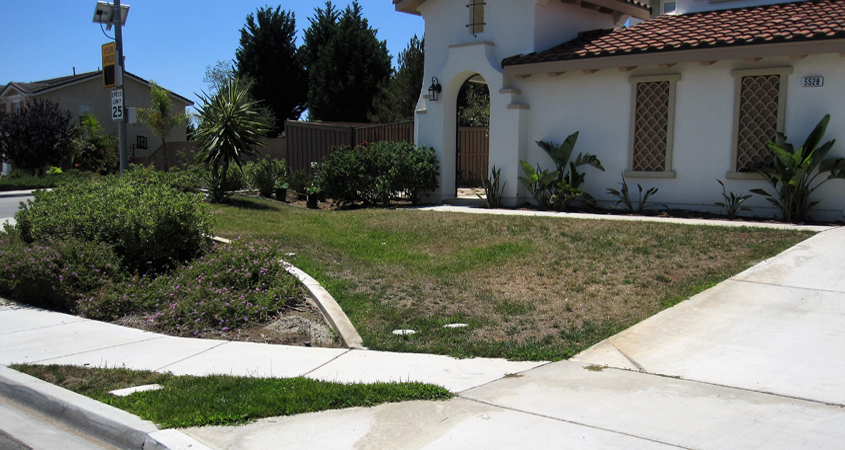 The Oberkamp home before its landscaping makeover. Photo: Water Authority

The Water Authority has scheduled a full calendar of WaterSmart Landscape Makeover Classes for 2019, with the first series starting in February in Fallbrook. Limited enrollment ensures every participant receives hands-on support. Homeowners who want to attend a course in 2019 should complete an online application and get on the waiting list. Apply at WaterSmartSD.org. 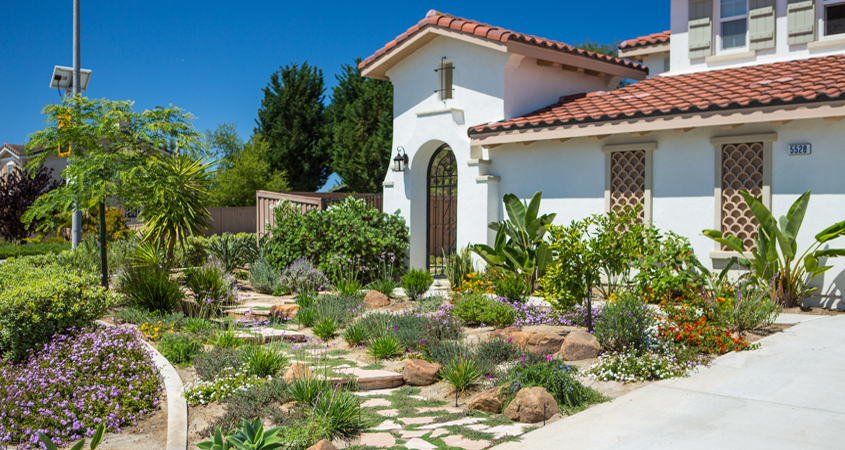 The Oberkamp home after its landscaping makeover. Photo: Water Authority

The California Department of Water Resources funds the class series because it generates water savings. It also generates a lot of enthusiasm, according to participant reviews.  “Could not believe the amount of information and guidance. Worth every minute and highly recommended!” said one participant.

“Wonderful class!” said another. “The instructors, the workbook and resources are beyond belief. I still have a lot to learn, but I will definitely be implementing everything.”

Absent major changes to farming practices and an increase in water supply, Kern County’s farming juggernaut will have to shrink considerably to meet aggressive new targets for conservation. A study commissioned by the Kern Groundwater Authority suggests tremendous job losses are a possibility as water district managers and farmers work toward compliance with the Sustainable Groundwater Management Act.

San Diego County residents have targeted more than 1 million square feet of turf grass for replacement with WaterSmart landscaping through free landscape makeover classes sponsored by the San Diego County Water Authority over the past five years. While not all the targeted turf has actually been removed, post-class surveys show that many participants end up taking out more turf than they initially planned after seeing the benefits of their work, said Joni German, who coordinates the Water Authority’s award-winning WaterSmart Landscape Makeover Series.

The San Diego County Water Authority approved a change order for their Moosa Canyon Erosion Control project. The CWA board approval Oct. 25, adds $351,000 to the contract amount and is the third change order associated with the dewatering system needed to address groundwater, which was encountered at a higher level than expected. The newest change order increases the total contract amount with Granite Construction from $1,445,889 to $1,806,889, while changing the contract end date from Oct. 31 to Dec. 31.

Downed trees. Closed schools. Dead power lines. Dust-choked freeways. Frayed nerves. Pinched sinuses. The arid Santa Ana winds made life miserable across San Diego County for a second straight day on Tuesday. But by mid-afternoon, the region had escaped what it fears most: a major wildfire. And that was seen as something of a miracle by the National Weather Service.

For the past week, California has been locked in a tense, daily mix of choking thick smoke and dangerously dry, windy fire-weather conditions. But an end might be around the corner. Meteorologists said Tuesday that two storm systems appear to be developing over the Pacific Ocean, with rain increasingly likely next week for most of the state. “It looks like the storm door is going to open,” said Jan Null, a meteorologist with Golden Gate Weather Services in Saratoga.

A water district which serves parts of the Conejo Valley suffered major damage during the Woolsey Fire, but officials say they were able to keep water supplies flowing in most spots as the blaze moved through the area. The Los Virgenes Municipal Water District suffered fire damage to its water filtration and composting facilities. Power outages affected the system, but managers were able to borrow generators from other water agencies to stay in operation.

Understanding your ETo zone and gardening climate zone are important first steps... toward deciding how much water your landscaping will need. Working against the ETo & gardening climate zones can greatly increase your need for irrigation. https://www.waternewsnetwork.com/sustainable-gardeners-get-into-your-climate-zone/ #cawater #DIY #cawx