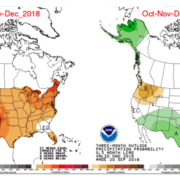 At the start of the 2019 water year, the combination of diversified water supplies and water-use efficiency means the San Diego region has enough water for 2019 and the foreseeable future despite historically low rainfall over the past 12 months.

“It has been very hot and dry, but we have invested wisely in infrastructure and regional water-use remains well below where it was at the start of the last drought,” said Jeff Stephenson, a principal water resources specialist with the Water Authority. “In fact, potable water use over the past three-plus years was 17 percent below 2013, which shows that San Diego continues to live WaterSmart.”

Still, said Stephenson, “we are looking for a wet winter locally, and in the Sierra and Rocky Mountains, to help replenish reserves for future years.”

Water managers use “water years” that run from October 1 through September 30 to track rain and snow. Local rainfall during water year 2018 totaled just over 3 inches at Lindbergh Field – 67 percent below normal and the second-lowest in San Diego history dating back to 1850.

In addition, local temperatures have been significantly above normal for most of the past five years. In many of those months, the average daily maximum temperatures were more than 4 degrees above long-term averages.

The National Weather Service’s Climate Prediction Center forecasts continued warm conditions for California through December, with a 33 percent probability of above-normal precipitation locally. The U.S. Drought Monitor’s classification of San Diego County as an area of “Severe Drought” is based on weather factors – but it does not reflect water supply conditions.

More than $3.5 billion in regional water investments by San Diego County ratepayers over the past three decades mean water supplies will meet demands regardless of the weather.

New supplies and infrastructure upgrades include the Claude “Bud” Lewis Carlsbad Desalination Plant, which delivers approximately 50 million gallons of potable water per day for regional use, along with a ramp-up of water delivered to San Diego County as part of a long-term water conservation and transfer deal signed in 2003.

Other regional assets include the storage of 100,000 acre-feet of water behind the raised San Vicente Dam due to conservation efforts during the last drought. In addition, many key reservoirs statewide, including Diamond Valley Lake in Riverside County, remain near average levels for this time of year. Significantly, no shortages are expected on the Colorado River system in 2019, though long-term drought conditions continue to be a concern across the Southwestern U.S.

The Water Authority offers several programs, including a Landscape Transformation program rebate, to promote water-use efficiency. Residents and business can also attend free sustainable landscaping classes, and access online videos and tips. To learn more about those resources and others, go to WaterSmartSD.org.

During the past 60 years, Vista-based L.H. Woods & Sons, Inc. has executed dozens of contracts for upgrades to the pipelines that convey water throughout San Diego County. The family-owned company was recently honored by the San Diego County Water Authority, following the completion of a $28 million pipe-relining project, which was Woods’ final project for the agency.

San Diego Unified has tested nearly 2,000 water fixtures for lead, after first finding contamination at a school in early 2017. Of those, nearly 20 fixtures tested above 15 parts per billion, the Environmental Protection Agency’s limit for lead content. The district has either fixed the problem or cut off access to those fixtures. Another 225 tested above 5 ppb — the standard for bottled water and the new target San Diego Unified has set for all of its water. Those, too, have been remediated or blocked off as the district finishes installing filters.

As Hurricane Michael threatens the East Coast, Hurricane Sergio is making Southern California beaches dangerous this week. Sergio is churning off the coast of Mexico, bringing dangerous surf conditions until Friday, according to the National Weather Service. Some minor coastal flooding is expected at south-facing beaches, from Oxnard all the way down to San Diego. Hazardous surf conditions will likely last through at least Thursday night. Estimates of surf heights are 5 to 8 feet with sets to 10 feet during the peak of the event.

At the start of the 2019 water year, the combination of diversified water supplies and water-use efficiency means the San Diego region has enough water for 2019 and the foreseeable future despite historically low rainfall over the past 12 months. “It has been very hot and dry, but we have invested wisely in infrastructure and regional water-use remains well below where it was at the start of the last drought,” said Jeff Stephenson, a principal water resources specialist with the Water Authority.

An estimated three-quarters of the water used by farms, ranches and dairies in California originates as snow in the Sierra Nevada mountain range, but the future viability of that resource is projected to be at heightened risk due to global climate change. In a study published today in Proceedings of the National Academy of Sciences, University of California, Irvine researchers argue that a 1.0 degree Celsius increase in the global average winter temperature will lead to a 20 percent jump in the likelihood of below-average snow accumulation in the high country, resulting in lower spring runoff.

You won’t be seeing much of California’s gubernatorial candidates this fall — at least, you won’t be seeing much of them together. The only debate between Democrat Gavin Newsom and Republican John Cox took place on KQED’s Forum radio program Monday. Prompted by host Scott Shafer, the two had a lengthy exchange about the state’s approach to climate change. Newsom applauded the state’s aggressive goals to reduce greenhouse gas emissions, while Cox said they would impose too high a price for the average Californian.

The state of California recently released its Fourth Climate Change Assessment. Among the technical reports was a deep dive into the future of the State Water Project and the Central Valley Project. It was over my head. It was calling my name. And in climate change’s frenzied media cycle, the whole assessment soon faded. That’s too bad. This assessment of the state’s two largest water projects provides an important but foggy glimpse into what all of our water successors come 2060 will likely be fighting about. The fog is due to how there is no single prediction from what today’s best science, collectively, is trying to tell us.