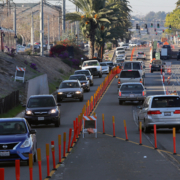 Major construction activities have concluded at a pipeline relining project in La Mesa and Spring Valley, and the entire project is on track for completion by the end of June.

The timely success of the project underscores the value of collaboration by the Water Authority’s project team; public agency stakeholders such as the city of La Mesa and Helix Water District; and the contractor, L.H. Woods & Sons, Inc.

Construction began in September 2017. The bulk of the work was performed underground, through portals, which allow easy access to the pipe. This process is about half the cost of a conventional pipeline replacement project and is less disruptive to the environment and surrounding communities.

The 4.3-mile project is part of a larger effort by the Water Authority to rehabilitate 82 miles of its pre-stressed concrete cylinder pipe installed between the early 1960s and 80s throughout the county. This type of pipe has been found to be less reliable than previously thought. In response, the Water Authority launched the Pipeline Relining Program to reinforce these pipes with steel liners, increasing their service life by 75 years or more.

With the last of the new steel liners installed, welded, grouted and lined with cement mortar, the remaining work includes site restoration – such as re-paving and re-striping roadways – and demobilizing.

With the completion of the Lake Murray to Sweetwater project, the Water Authority has rehabilitated more than half of its pre-stressed concrete cylinder pipe.

Plans for an ocean desalination plant in Dana Point are moving forward with the recent release of a draft Environmental Impact Report and an upcoming public meeting to review the report’s findings, which state that if built, the project will not have any “unavoidable significant environmental impacts.” South Coast Water District, which provides water to several south-county cities and some Laguna Beach residents, released the draft report for the Doheny Ocean Desalination Project on May 23, which begins a 60-day public review period. The analysis evaluates the possible environmental impacts of producing desalinated drinking water.

During Jerry Brown’s first stint as governor four decades ago, he was openly disdainful of big public works projects, often citing British economist E.F. Schumacher’s 1973 book, “Small is Beautiful: A Study of Economics As If People Mattered.” Brown’s attitude manifested itself in a virtual halt to highway construction, which led to constant bickering with his fellow Democrats in the Legislature who wanted projects in their districts.

A recent column in these pages accurately described how climate fluctuations every few years can affect water supply in Southern California. And yes, supply variations must be addressed by water resource agencies. A solution being considered by the Orange County Water District, purchasing desalinated seawater from Poseidon Resources, would create a continuous supply of new water — even in the years when we don’t need it. Since we know that the problem is the variability of our water supply, why commit to a $1 billion alternative that does not address the problem of water supply variability?