Northern California reservoirs and the Sierra snowpack were dramatically bolstered by the string of recent storms, and that’s good news for millions of people across the state.

Just not necessarily those who live in San Diego. 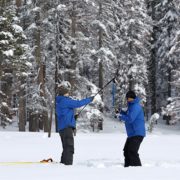 The California Department of Water Resources first manual snow survey of the season Tuesday at Phillips Station recorded 55.5 inches of snow depth and a snow water equivalent of 17.5 inches, which is 177% of average for the location. The snow water equivalent measures the amount of water contained in the snowpack and is a key component of DWR’s water supply forecast. Statewide the snowpack is 174% of average for this date.

California is expected to see continued rain and snow over the next seven days, with the threat of flooding in parts of California. Conditions so far this season have proven to be strikingly similar to last year when California saw some early rainstorms and strong December snow totals only to have the driest January through March on record.

“The significant Sierra snowpack is good news but unfortunately these same storms are bringing flooding to parts of California,” said DWR Director Karla Nemeth. “This is a prime example of the threat of extreme flooding during a prolonged drought as California experiences more swings between wet and dry periods brought on by our changing climate.”

More telling than a survey at a single location are DWR’s electronic readings from 130 stations placed throughout the state. Measurements indicate that statewide, the snowpack’s snow water equivalent is 17.1 inches, or 174%  of average for January 3.

DWR today conducted the first Phillips Station snow survey of the season. The manual survey recorded 55.5 inches of snow depth & a snow water equivalent of 17.5 inches, which is 177 percent of the January 3 average for this location. pic.twitter.com/0m169UX2xv

Opportunities to save more water

“After three consecutive years of drought, the recent series of storms is a good start to the season,” said Jeff Stephenson, water resources manager with the San Diego County Water Authority. “However, we had a similarly strong early winter last year, which did not continue. While the Water Authority and its 24 member agencies have worked and continue to develop diverse water supply sources, there are still opportunities, including rebates, to save more water.”

Stephenson added that the region has reduced its reliance on imported water supplies, including from the Sacramento-San Joaquin Bay Delta, which means more of that source is available for other parts of California.

The severity of the current drought makes it important for everyone in San Diego County to take more water-saving actions. Find more ways to save: https://t.co/9NdxuJaoxs #cawater #cadrought pic.twitter.com/jagFayYOvK

Strong start but “a long way to go”

The January 2023 manual snow survey results are similar to results in 2013 and 2022 when the January 1 snowpack was at or above average conditions, only for dry weather to set in and lead to drought conditions by the end of the water year (September 30).

In 2013, the first snow survey of the season also provided promising results after a wet December similar to today’s results. However, the following January and February were exceptionally dry, and the water year ended as the driest on record, contributing to a record-breaking drought. In 2022, record-breaking December snowfall was again followed by the driest January through March period on record.

“Big snow totals are always welcome, but we still have a long way to go before the critical April 1 total,” said DWR’s Snow Surveys and Water Supply Forecasting Unit Manager Sean de Guzman. “It’s always great to be above average this early in the season, but we must be resilient and remember what happened last year. If January through March of 2023 turn out to be similar to last year, we would still end the water year in severe drought with only half of an average year’s snowpack.”

On average, the Sierra snowpack supplies about 30% of California’s water needs and is an important factor in determining how DWR manages the state’s water resources. Its natural ability to store water is why the Sierra snowpack is often referred to as California’s “frozen reservoir.” A below-average snowpack impacts water users across the state, putting further stress on the environment and critical groundwater supplies.

Due to these increasing swings from dramatically wet to dry conditions, Governor Newsom’s recently released “California’s Water Supply Strategy, Adapting to a Hotter, Drier Future” calls for investing in new projects and technologies that will modernize how the state manages water.

Current climate research indicates the state will see bigger swings from extreme heat and dry conditions to larger and more powerful storms that deliver temporary large boosts to the state snowpack as well as flood risk.

DWR encourages Californians to visit SaveOurWater.com for water saving tips and information, and to continue to conserve California’s most precious resource, rain or shine. DWR conducts five snow surveys at Phillips Station each winter near the first of each month, January through April and, if necessary, May. The next survey is tentatively scheduled for February 1.

It’s beginning to look a lot like Christmas across the West, and for the parched mega-drought region, the December snow is a welcome gift. With back-to-back-to-back winter storms across the West, the snowpack is thriving. Parts of the Sierra and the Pacific Northwest are seeing above-average snowpack for this time of year. In Central California, the Sierra stands at 200% of normal for snowpack average to date.

The Sierra snowpack vital to supplying water for California’s residents, businesses, and farms is off to a strong start. Recent storms bringing rain to the Valley and other parts of the state are also dumping snow on the Sierra Nevada. According to the state Department of Water Resources, the northern Sierra snowpack is 155% of normal through Monday. Meanwhile, the central Sierra and southern Sierra snowpacks are 166% and 216% of normal, respectively.

California’s vital Sierra snowpack has fallen “well below average” in the third official measurement of the season, signaling another year of drought is ahead.

That was the conclusion after the Department of Water Resources conducted the third snow survey of the season Tuesday at Phillips Station west of Lake Tahoe.

Following the driest January and February in state history, the manual survey recorded 35 inches of snow depth and a snow water equivalent of 16 inches, which is 68% of average for this location in March.

The recent dry weather in Northern California might be sticking around for a while.

The Climate Prediction Center forecasts a 77% chance La Niña conditions will continue through the month of May.

The term La Niña refers to a correlation between ocean water temperatures and winter weather patterns.

Oftentimes, the weather event brings wetter than normal conditions to the Pacific Northwest and drier weather to Southern California.

California hasn’t seen rain in over a month, and some of the state’s key reservoirs are starting to be impacted.

Other reservoirs are up from where they were at this time last year.

“This would be expected given that last year was the 2nd driest year for CA in our observed record and the 2020-2021 two year period set a new record for dryness,” Michael Anderson, the state climatologist for the Department of Water Resources, wrote in an email.

A one-two punch of storm systems is expected to drape the Bay Area in rainy weather for much of the upcoming week while potentially making holiday travel in the Sierra Nevada mountains “very challenging to impossible,” meteorologists say.

Full Story
https://www.waternewsnetwork.com/wp-content/uploads/2018/02/water-news-network.png 0 0 Chelsea Campos https://www.waternewsnetwork.com/wp-content/uploads/2018/02/water-news-network.png Chelsea Campos2021-12-20 10:39:352021-12-20 10:46:15Rainy Week on Tap for the Bay Area; Sierra Snow to Complicate Holiday Mountain Travel
Thanks to multiple atmospheric river events, average snowpack in California has gone from 18% to 98% in just two weeks.
“Increases in snowpack of this size are not common, but also not unprecedented,” Julie Kalansky, deputy director of operations for the Center for Western Weather and Water Extremes (CW3E), explained.
Kalansky pointed out previous studies have shown a jump on this scale can happen about twice every three years, but usually over the course of an entire winter, not just the month of December. While they don’t have the exact rankings for each month of the year, “most of the storm events in the study we referenced for the above calculation were in the second half of December and later into the season,” Kalansky added.
The sudden change gives California its wettest start to the Water Year in more than 40 years, thanks to several drought-denting rain and snow systems pushing through the area in recent weeks. The Water Year runs from October 1 through September 30 of the following year.
Full Story
https://www.waternewsnetwork.com/wp-content/uploads/2018/02/water-news-network.png 0 0 Ed Joyce https://www.waternewsnetwork.com/wp-content/uploads/2018/02/water-news-network.png Ed Joyce2021-12-19 09:15:542021-12-19 09:16:21California Snow Drought Ends in Dramatic Fashion, While Other States Still Deal with Shortage

Fresh off a week filled with rain and snow due to an atmospheric river, water conservation may not be top of mind for everyday Californians.

NBC Bay Area Meteorologist Rob Mayeda just broke down some figures from this latest storm. In a Friday tweet he says, “Sierra Snowpack Surge: Up to 66% of average from just 40% one week ago. Biggest rains for the Central and Southern Sierra.”

While the recent precipitation may make the 2011-2017 California drought seem like a distant memory, a couple of laws passed by the legislature at that time are set to rain down policy on water agencies throughout the state.

Starting in November of 2023, California will enact a statewide indoor water use standard of 55 gallons per person per day. Local water agencies could be fined $10,000 a day by the state if they fail to meet the standard.