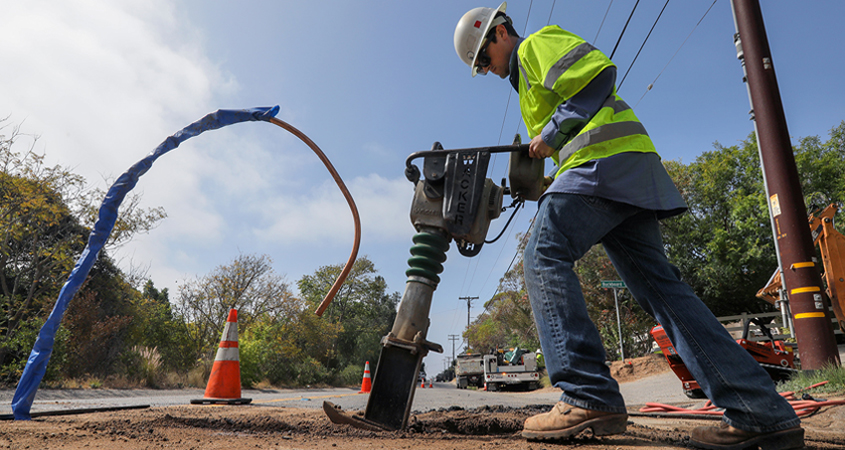 FPUD is embarking on a number of prevention, maintenance and improvement projects to safeguard and maintain its pipes and infrastructure. Photo: Fallbrook PUD

Water pipeline blowouts like the one the day before Thanksgiving 2017 at the intersection of Stagecoach Road and Ranchwood Lane in Fallbrook provide periodic reminders about the realities of aging infrastructure.

Preventing these type of emergencies is the driving force behind planned shutdowns at water agencies such as the Fallbrook Public Utility District; investments today will avoid similar emergencies and unplanned water outages in the years ahead.

Many of FPUD’s pipes are more than 50 years old. A pipeline’s life can be 80 to 100 years, but many of the early lines that were installed were not put in at today’s standards and have shorter lives.

In fact, some of the early pipelines installed in the area were originally excavated from March Air Force Base in Riverside County and re-installed in Fallbrook, said FPUD general manager Jack Bebee. Many of these pipelines have reached the end of their useful lifespans.

That’s why FPUD is embarking on a number of prevention, maintenance and improvement projects to safeguard and maintain our pipes and infrastructure. Waiting to fix them after they break isn’t the most cost-effective and convenient way to operate.

The shutdowns and retrofits are part of FPUD’s proactive approach to pipeline and valve replacement. By identifying pipes that are in the worst condition, the agency is prioritizing those needing to be replaced first, resulting in fewer pipe failures, blowouts and spills.

As part of its ongoing maintenance program, FPUD has refurbished six of its eight steel tanks over the past several years. It is also working on systematic valve replacement covering the entire community area. Valves are a critical component of water and sewer system infrastructure to limit the size of any shutdown.

All FPUD construction work will be on weekdays between 7 a.m. and 4:30 p.m., with an exception for projects that disrupt businesses. Those projects may be scheduled overnight. FPUD customers will receive both a letter and phone call if the planned shutdown will affect their water service.

Residents can also visit the FPUD Facebook page for other water-related updates.

“The fact we have... received these face masks from the state points to how critical #agriculture is as an essential service to keep food on the table, especially during these challenging times.”

As an essential employee, @OtayWater Customer Service Representative II Dana ... Gutierrez is working during the COVID-19 pandemic to ensure a safe, reliable and plentiful water supply. She is Water Utility Hero of the Week! Read more: http://bit.ly/3fpFfIP (via @sdcwa) #GoodRead

⚠️ Reminder to stay off closed trails in Missi

We had so much fun talking to a @sdgirlscouts troo

“The fact we have received these face masks from the state points to how critical agriculture is as an essential service to keep food on the table, especially during these challenging times.” — Carlos Ortiz, Imperial County Agricultural Commissioner

More than 500,000 face masks have been distributed to agriculture industry workers in the Imperial Valley...
view on facebook
·share

As reservoirs open in San Diego County, new coronavirus safety and cleaning protocols were established an...
view on facebook
·share

The first piece of piping for the Flow Regulatory Structure II in Mission Trails Regional Park was installed this week. Reminder that construction is underway in the western region of the park and some trails remain closed. Stay safe and stay off closed trails. ... see moresee less