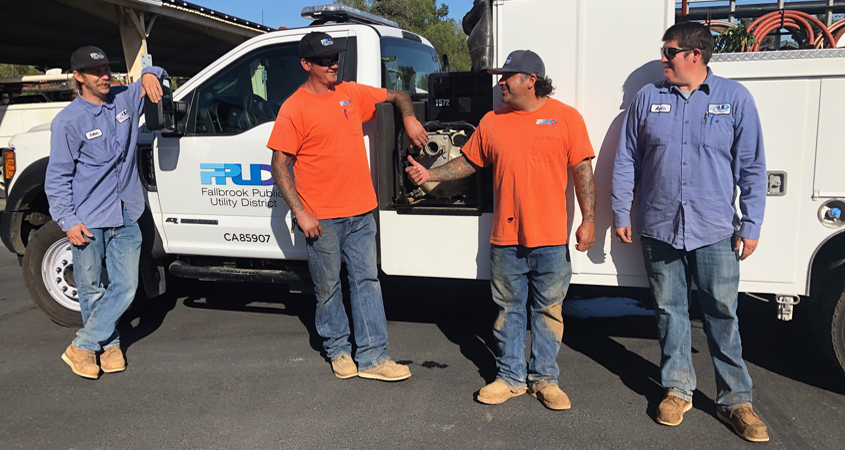 The Camp Fire burned 153,336 acres, destroyed 18,793 structures, caused 85 deaths and three firefighter injuries. The Camp Fire is the deadliest, most destructive fire in California’s history, according to CAL FIRE.

“I just want to help,” said Wendt. “That town went through devastation and I can actually do something to physically help. My wife and I always send backpacks to places devastated by hurricanes. For the most recent one, we sent 25 backpacks stuffed with school supplies.”

The Paradise Irrigation District is still struggling to repair the damaged infrastructure that resulted in more than 10,500 customers being issued a “do not drink” water advisory.

Fallbrook PUD crews will bring back lessons learned to community

Their time away won’t cost FPUD a penny as their labor is reimbursed by FEMA, the Federal Emergency Management Agency.

“We’re doing this because we recognize that we are in a fire-prone area here in Fallbrook,” said Jack Bebee, FPUD general manager.

The Rice Fire in 2007 burned 206 homes, 9,472 acres, two commercial properties, and 40 outbuildings in the Fallbrook area. Bebee said he knows Fallbrook may one day need the help the crews are now providing to Paradise.

He said the crews can bring back with them some of the lessons they learn from the destruction and repair work. Bebee said the district is also working with North County Fire on emergency preparedness and the FPUD board room has been set up as an emergency command center in the event it is needed.