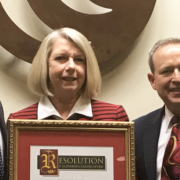 California U.S. Senator Dianne Feinstein said in a letter that she valued Stapleton’s expertise on water issues. “During your more than 40 years of public service, you have demonstrated a deep commitment to your profession and the region,” wrote Feinstein. “Under your skilled leadership, the Water Authority successfully developed water storage and conservation projects and oversaw construction of the nation’s largest desalination plant.

“Although your presence will be greatly missed, I am confident that your record of hard work and dedication will serve as a model for those who follow in your footsteps.”

In a California legislative resolution, elected leaders representing San Diego County lauded Stapleton “for her long and distinguished record of professional service and for her outstanding civic leadership.”

The resolution highlighted Stapleton’s many achievements over 23 years at the helm of the Water Authority, including successfully negotiating the landmark 2003 Colorado River Quantification Settlement Agreement. It is the nation’s largest ag-to-urban water conservation-and-transfer agreement, and it remains a cornerstone of water management in the Southwest.

“As General Manager, Maureen Stapleton oversaw the greatest investment in large-scale regional water infrastructure in San Diego County history, including the first major new dam and reservoir in 50 years and the nation’s largest seawater desalination plant – an investment that provides significant protections for the San Diego region in the event of imported water supply emergencies and droughts.”

Under Stapleton’s guidance, the Water Authority also implemented cutting-edge urban water conservation programs that have helped to reduce per capita water use in the San Diego region by more than 40 percent since 1990. The Water Authority also significantly increased water supply protections for the region during droughts or other emergencies with $3.5 billion in investments. And, the Water Authority partnered with Poseidon Water to develop the largest seawater desalination plant in the nation.

Click here to view the resolution by the San Diego delegation.

‘She refused to suffer drought’

Former California Gov. Pete Wilson, who was in office during peak drought years in the early 1990s, highlighted Stapleton’s leadership during that time to create a safe, stable and reliable water supply for the region.

“The history of San Diego has always been about the struggle to create an adequate and reliable water supply,” Wilson said. “But today, that story has a new chapter, written by Maureen and her team at the Water Authority. Their success in building a highly reliable water supply that fuels San Diego’s robust economy and supports a quality of life envied the world over has been nothing short of remarkable and historic. She refused to just suffer drought.”

San Diego Rep. Scott Peters honored Stapleton with a Congressional Proclamation on behalf of the U.S. House of Representatives and the constituents of the 52nd Congressional District “for her lifelong contributions, exemplary leadership, and service to the San Diego region.”

The proclamation said: “She led a successful, multi-decade strategy to diversify and improve the reliability of San Diego County’s water supply, which now supports at $220 billion economy and the qualify of life for 3.3 million people; she transformed the Water Authority into a pioneering, visionary, agile, and driven public agency; and she has been a pillar of San Diego civic life for decades through service on several boards and foundations.”

Click here to view the proclamation from Congressman Scott Peters.

Monday is the new deadline for all parties to sign the drought contingency plan — the deal between seven states to share less water on the Colorado River. Arizona state lawmakers approved the deal ahead of a late January deadline but the federal government said it didn’t meet the mark. Meanwhile, some say the plan doesn’t go far enough to ensure Arizona has enough water for the future.

It’s no surprise, but feet upon feet of Sierra snow across multiple storms in February translated to healthy snow water content for California. How healthy? Department of Water Resources officials observed more than double what they measured last month at Phillips Station near Echo Summit, recording 113 inches of snow depth with a snow water equivalent of 43.5 inches Thursday, according to a news release. A month ago at the February survey (Jan. 31), snow-water equivalent had reached 100 percent of the statewide average (17.3 inches) at the February survey.

The U.S. Drought Monitor (USDM) is released weekly to indicate what areas throughout the United States are experiencing some level of the five-category drought. The USDM levels range from the lower end of Abnormally Dry to the highest level of drought, Exceptional Drought. During the recent five-year drought, which ended with the record-setting winter of 2016-17, Californians were faced with water shortages and much of the state ranked in the Extreme and Exceptional categories.

Back-to-back storms hammering California this winter have nearly washed drought off the California map. After the recent atmospheric river, only a lingering sliver of “moderate drought” conditions remains near the Oregon border. The federal Drought Monitor Map, one way to measure drought that’s mainly used in agriculture, shows two percent of the state with “moderate drought” conditions and 13 percent abnormally dry in its Feb. 28 report.

State and federal dignitaries praised retiring San Diego County Water Authority General Manager Maureen Stapleton today for decades of public service and her achievements in securing safe and reliable water supplies for the region. Stapleton announced her retirement from the Water Authority earlier this month, prompting several commendations during the Water Authority Board of Directors regular February meeting. California U.S. Senator Dianne Feinstein said in a letter that she valued Stapleton’s expertise on water issues. “During your more than 40 years of public service, you have demonstrated a deep commitment to your profession and the region,” wrote Feinstein.

The Association of California Water Agencies recognized Olivenhain Municipal Water District Feb. 27 with its “Most Effective Agency on Federal Issues” award. The award was presented to OMWD General Manager Kimberly Thorner at ACWA’s annual conference in Washington, DC. In 2018, OMWD engaged House and Senate committees as well as staff from the US Bureau of Reclamation and Government Accountability Office on the Title XVI program that facilitates water reclamation and reuse. The program has been an important funding mechanism for the development of recycled water infrastructure that ultimately increases the reliability of California’s increasingly taxed water supplies.

For the first time in a long time, the San Diego area is reaping the benefits of mother nature’s generosity. “We’ve had 9 inches of rain so far in February, it could be a record,” says Ron Mosher of the Sweetwater Authority. As a result, Sweetwater is sharing the wealth. All that water has been collecting in a series a lakes and reservoirs. “It’s been a blessing. We’re now transferring enough water to supply 130,000 people for six months,” says Mosher.