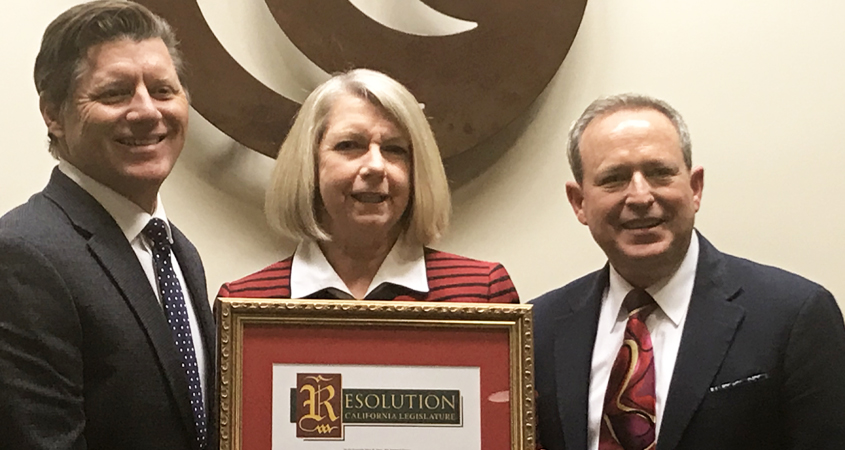 California U.S. Senator Dianne Feinstein said in a letter that she valued Stapleton’s expertise on water issues. “During your more than 40 years of public service, you have demonstrated a deep commitment to your profession and the region,” wrote Feinstein. “Under your skilled leadership, the Water Authority successfully developed water storage and conservation projects and oversaw construction of the nation’s largest desalination plant.

“Although your presence will be greatly missed, I am confident that your record of hard work and dedication will serve as a model for those who follow in your footsteps.”

In a California legislative resolution, elected leaders representing San Diego County lauded Stapleton “for her long and distinguished record of professional service and for her outstanding civic leadership.”

The resolution highlighted Stapleton’s many achievements over 23 years at the helm of the Water Authority, including successfully negotiating the landmark 2003 Colorado River Quantification Settlement Agreement. It is the nation’s largest ag-to-urban water conservation-and-transfer agreement, and it remains a cornerstone of water management in the Southwest.

“As General Manager, Maureen Stapleton oversaw the greatest investment in large-scale regional water infrastructure in San Diego County history, including the first major new dam and reservoir in 50 years and the nation’s largest seawater desalination plant – an investment that provides significant protections for the San Diego region in the event of imported water supply emergencies and droughts.”

Under Stapleton’s guidance, the Water Authority also implemented cutting-edge urban water conservation programs that have helped to reduce per capita water use in the San Diego region by more than 40 percent since 1990. The Water Authority also significantly increased water supply protections for the region during droughts or other emergencies with $3.5 billion in investments. And, the Water Authority partnered with Poseidon Water to develop the largest seawater desalination plant in the nation.

Click here to view the resolution by the San Diego delegation.

‘She refused to suffer drought’

Former California Gov. Pete Wilson, who was in office during peak drought years in the early 1990s, highlighted Stapleton’s leadership during that time to create a safe, stable and reliable water supply for the region.

“The history of San Diego has always been about the struggle to create an adequate and reliable water supply,” Wilson said. “But today, that story has a new chapter, written by Maureen and her team at the Water Authority. Their success in building a highly reliable water supply that fuels San Diego’s robust economy and supports a quality of life envied the world over has been nothing short of remarkable and historic. She refused to just suffer drought.”

San Diego Rep. Scott Peters honored Stapleton with a Congressional Proclamation on behalf of the U.S. House of Representatives and the constituents of the 52nd Congressional District “for her lifelong contributions, exemplary leadership, and service to the San Diego region.”

The proclamation said: “She led a successful, multi-decade strategy to diversify and improve the reliability of San Diego County’s water supply, which now supports at $220 billion economy and the qualify of life for 3.3 million people; she transformed the Water Authority into a pioneering, visionary, agile, and driven public agency; and she has been a pillar of San Diego civic life for decades through service on several boards and foundations.”

Click here to view the proclamation from Congressman Scott Peters.

'Environmental stewardship'
The City of Encinitas and the Olivenhain Municipal ... Water District are working together on a project that keeps water supply and traffic flowing.
https://bit.ly/3g4Sn7M #cawater #infrastructure #EssentialEmployees

"Our job has changed in a big way," said Ivan Martinez, @cityofpoway wastewater ... utilities worker about the #coronavirus pandemic. Read why (hint: don't flush baby wipes and paper towels) & learn more about one of the water industry's #EssentialEmployees. https://bit.ly/2X2hi49

"Our job has changed in a big way," said Ivan Martinez, City of Poway wastewater utilities worker about the coronavirus pandemic. Read why (hint: don't flush baby wipes and paper towels) and learn more about one of the water industry's essential employees. bit.ly/2X2hi49 ... see moresee less

Ivan Martinez, City of Poway Wastewater Utilities Worker, is one of the essential employees keeping the w...
view on facebook
·share

» Farmers must diversify in a post-pandemic world, ag experts say

» States are reopening from coronavirus shutdowns. What happens to frozen utility payments?