San Diego County water officials, who have been mired in legal disputes with their counterparts to the north over billions of dollars in rates and methodology, proposed a sweeping compromise Thursday that, if accepted, could end years of acrimony and expensive litigation. 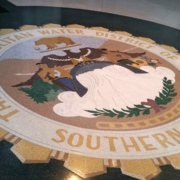 San Diego County Water Authority Board Chair Jim Madaffer today sent a letter to the Metropolitan Water District of Southern California’s Board of Directors that lays out a potential compromise approach by both parties designed to end nearly a decade of litigation over MWD’s rates.

The letter includes specific, practical terms that respect both the Water Authority’s and MWD’s perspectives towards an equitable conclusion in coming weeks.

“Concluding all pending court cases is in the best interest of everyone involved, and it would allow us to begin a new era of collaboration on other important regional and state issues,” said Madaffer, who started his tenure as chair on Oct. 1. “I hope MWD will embrace this gesture of good faith to seek settlement, and that we can do so in an expeditious and fair manner.”

Madaffer’s letter builds on the commitment of his predecessor, prior Water Authority Board Chair Mark Muir, to seek an end to lawsuits that started in 2010 and involve billions of dollars of contested rates and charges.

The complete letter is posted here.

More than 20 years ago, the Water Authority and its member agencies began improving the San Diego region’s water supply reliability by lessening reliance on MWD, which at the time supplied about 95 percent of all the water used in San Diego County.

The cornerstone of that diversification strategy is a set of agreements known collectively as the Colorado River Quantification Settlement Agreement, which was signed in 2003 to secure independent water supplies for the Water Authority from the Colorado River. To deliver these supplies to San Diego County, the Water Authority must use pipelines operated by MWD because MWD owns the only large-scale conveyance facilities in Southern California for transporting water.

The Water Authority filed suit in 2010 seeking to invalidate MWD’s rates, and then filed additional suits in 2012, 2014, 2016 and 2018 because MWD kept adopting rates using the same methodology and flawed cost allocations. A series of court decisions have been issued in the 2010 and 2012 cases. The other cases have been stayed in Superior Court during the appellate process on the initial two lawsuits.

Additional information is available on the Water Authority website.

The Salton Sea is the largest lake in California at around 970 square km. But it’s not the product of the powers of nature, it’s the product of a major engineering mistake over 110 years ago. Its creation wiped out the town of Salton and it grew to become a popular fishing and leisure spot during the 1950s. It also became an important local wildlife refuge.

It was a week after L.A.’s first major rain of the season, and hundreds of volunteers had gathered to pick up trash along the beach at a monthly cleanup organized by Heal the Bay. Ying, a volunteer herself, was giving them instructions — and helping make the case for a countywide measure on the Nov. 6 ballot that would raise money from property taxes to fund stormwater capture and cleanup.

Local water districts are offering rebates to homeowners that replace their grass with sustainable landscape, as many do all year, but a local water district says fall may be the perfect season to jump on the offers. “You’ve got cooler temperatures, shorter days so it gives a chance for the plants that you plant in the fall to take root before the heat of summer kicks in,” Michelle Curtis with the Helix Water District said.

Josh Hill, a marine biology teacher at Mar Vista High School, lost count of the number of times he’s gotten sick from swimming in the ocean at Imperial Beach. “It’s just kind of sad that we have this awesome natural resource that we don’t get to use,” he said. He and a group of students are raising awareness about water pollution by taking weekly water samples of the ocean and publishing their results online. Every Thursday, Hill and his students collect water from the south end of Seacoast Drive and the Imperial Beach Pier.