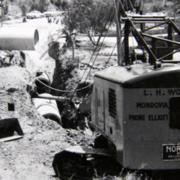 After 60 years of work upgrading the San Diego regional aqueduct system, Vista-based L.H. Woods & Sons, Inc. was honored by the San Diego County Water Authority’s Board of Directors upon completion of the company’s final project under local ownership for the Water Authority.

The Board formally marked the successful conclusion of the $28.6 million Lake Murray to Sweetwater Reservoir pipeline relining project at its September 27 meeting. L.H. Woods reinforced 4.3 miles of large-diameter pipeline to extend its service life by decades. At the meeting, the Board adopted a resolution honoring Woods for decades of unequaled service to the region’s 3.3 million residents and its $220 billion economy. 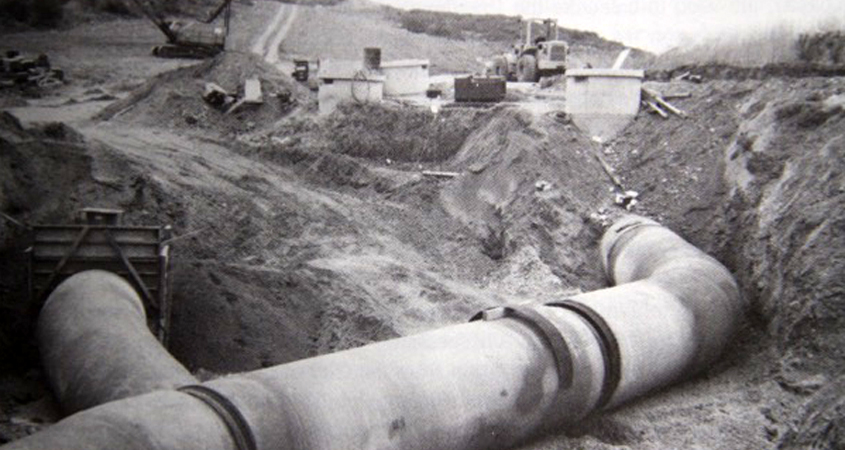 Since Woods’ first Water Authority project in 1959 to excavate the Second Aqueduct, three generations of Woods have worked on approximately 40 projects  for the agency. Work includes construction of several pipeline segments in the 1960s, 70s and 80s; construction of the North County Distribution Pipeline in the 1990s; emergency pipeline repairs near the San Diego River in 2008; and several pipeline relining projects in recent decades.

“Nothing is more important to our region’s economy and quality of life than ensuring our pipelines continue to deliver water without interruption – and no company has played a bigger role in that effort than Woods,” said Jim Madaffer, chair of the Water Authority’s Board. “Woods brings to each project an innovative spirit and an unwavering commitment to excellence that benefits every person in our region every single day.” 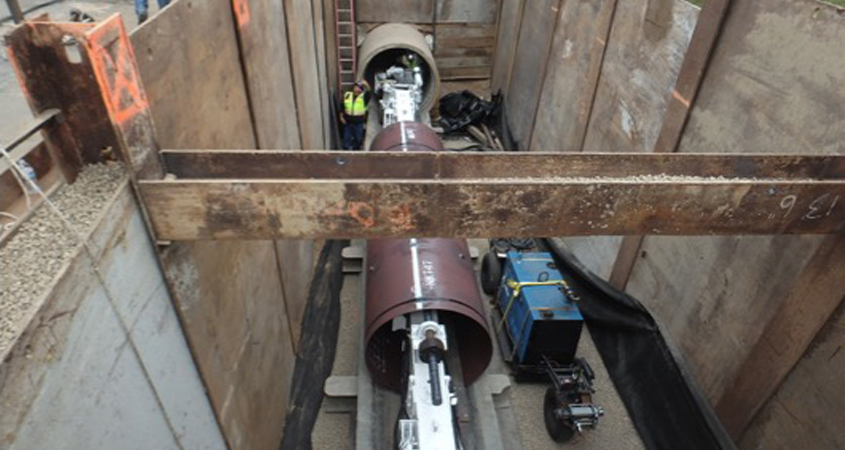 Much of the construction was in public rights-of-way in La Mesa on Baltimore Drive (south of the Laport Street-El Paso Street intersection), Nebo Drive (to University Avenue), and Spring Street. Work did not close any streets, through it temporarily reduced lanes for traffic. All construction equipment has been removed, and all streets have been restored. 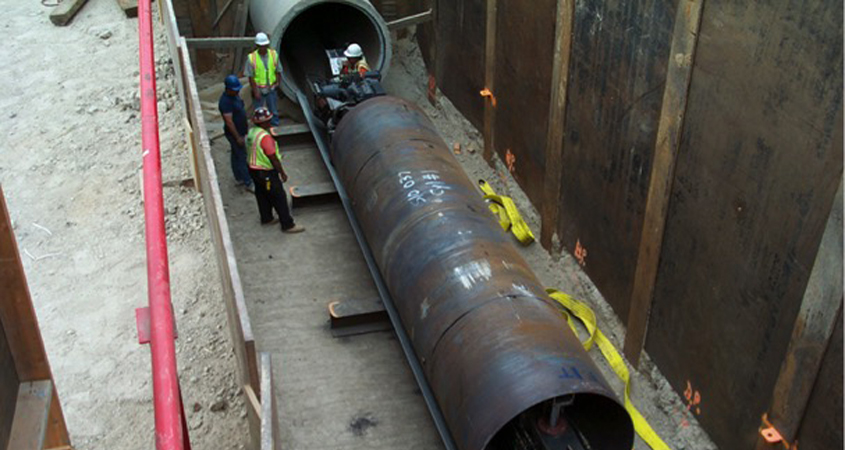 L.H. Woods working on one of many projects within the Water Authority’s relining program in 2000. Photo: Courtesy L.H. Woods

As a certified small business, Woods participated in the Water Authority’s Small Contractor Outreach and Opportunities Program, which is designed to maximize participation by small businesses in the agency’s procurements. In June, the company was purchased by J.F. Shea Co., Inc., one of the largest and oldest privately held construction companies in the nation. Shea’s storied history includes work on the Golden Gate Bridge, Hoover Dam and the pipeline connecting the Claude “Bud” Lewis Carlsbad Desalination Plant to the Water Authority’s regional water distribution system.

With the completion of the La Mesa to Sweetwater relining project, the Water Authority has relined 45 of the 82 miles of pre-stressed concrete cylinder pipe in its system.

Pre-stressed concrete cylinder pipes were commonly installed between the early 1960s and the late 1980s in water distribution systems throughout the world. This combination of concrete and steel initially appeared to provide unparalleled inner pipe strength and be highly resistant to corrosion. However, pre-stressed concrete cylinder pipes have not been as reliable as predicted, and the Water Authority is proactively relining sections of that pipe to extend their service life by at least 75 years.

The Water Authority’s relining program is an important part of its Asset Management Program, which helps avoid pipeline failures by identifying potential risks before they cause problems. To date, the Asset Management Program has saved water ratepayers more than $200 million by prioritizing repairs, avoiding unnecessary work and maximizing the service life of the region’s 310 miles of large-diameter pipelines.

Los Angeles County Measure W is a parcel tax to pay for cleaning up stormwater — the dirty runoff created when rain hits the streets and other paved surfaces, picks up toxic urban gunk and carries it downstream to foul the beaches and pollute the ocean. Depending on how you look at it, the measure is either a hard but necessary pill to swallow or an exciting step into the future. In either case, it’s the right move, and The Times urges voters to say yes.

Our state is in a fight over water policy that could hit all Californians squarely in their grocery carts. If the State Water Board’s unimpaired flow policy is adopted, significant additional amounts of water will be diverted away from farms and others and left in our rivers under the assumption that it will help native fish. Not only does science show this approach doesn’t work, we also know it will cause a variety of new problems. California families should reject this approach.

In 2012, the California Legislature passed a law stating that it is a human right to have safe drinking water. But it provided only meager funds for that purpose. Proposition 3, a water bond on the November ballot, includes $750 million for safe drinking water and safe wastewater disposal in disadvantaged communities, and to eliminate lead from water fountains in schools.

San Diego County will have enough water for 2019 in spite of low rainfall and high temperatures over the past year, the San Diego County Water Authority announced Monday. Rainfall during the 2018 water year, which ran from Oct. 1, 2017, to Sept. 30, totaled slightly more than three inches at San Diego International Airport, the county’s precipitation measurement site. SDCWA officials say that’s 67 percent lower than normal and the county’s second-lowest annual rainfall total since 1850.

With one of the highest costs for water in San Diego County, Padre Dam Municipal Water District has faced a lot of pushback from residents tired of expensive bills. But some relief is in sight. As of July 1, the district said, the average customer in its service area paid the third-highest cost for water in the county — just over $100 per month.

California utilities are restoring power to tens of thousands of customers after intentionally cuts due to extreme fire danger and Santa Ana winds, which may persist into Tuesday. Just over 31,000 customers remained without power in California early Tuesday morning, according to poweroutage.us. A woman was killed Monday morning when high winds blew a tree on a vehicle the woman was inside in Tustin, about 35 miles southeast of downtown Los Angeles in Orange County, KABC-TV reported.

The “devil winds” whipped San Diego County Monday, then quickly and mysteriously moved on, sparing the region the sort of hellacious horrors that the Santa Anas often bring in autumn. Having been told to brace for trouble, San Diegans collectively shrugged, sighed and went about their business. Most were unaware that the region was the beneficiary of timing and topography.

San Diego County will have enough water for 2019 in spite of low rainfall and high temperatures over the past year, the San Diego County Water Authority announced Monday. Rainfall during the 2018 water year, which ran from Oct. 1, 2017, to Sept. 30, totaled slightly more than three inches at San Diego International Airport, the county’s precipitation measurement site. SDCWA officials say that’s 67 percent lower than normal and the county’s second-lowest annual rainfall total since 1850.

In 2012, the California Legislature passed a law stating that it is a human right to have safe drinking water. But it provided only meager funds for that purpose. Proposition 3, a water bond on the November ballot, includes $750 million for safe drinking water and safe wastewater disposal in disadvantaged communities, and to eliminate lead from water fountains in schools. This is just one of many things Proposition 3 would accomplish by issuing $8.9 billion in revenue bonds to fund water projects in the state.