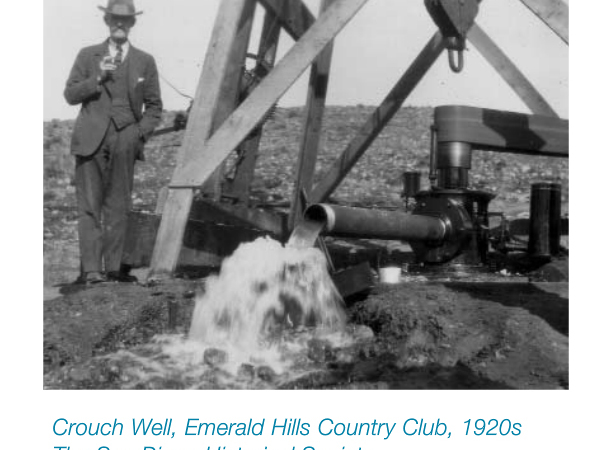 The area which constitutes Emerald Hills in San Diego County was once a Kumeyaay Indian burial site. The modern neighborhood is named for the Emerald Hills Country Club and Golf Course, established in the area in 1929 by Art Cloninger, a well-known restauranteur of the era. The hilly area had a magnificent view of the downtown San Diego area and San Diego Bay.

In the 1920s, all water was still procured locally in San Diego County. To develop his golf course, a well was dug on the property, known as the Crouch Well.

The club was sold in 1939 to build a transmitter site for new radio stations KFSD-AM/FM. Due to the proximity to the Chollas Naval Towers, the KFSD towers were not built until 1948. During World War II, the golf course remained in operation. After the radio transmitter facility was built, Emerald Hills was lowered from an 18 hole course to a nine-hole course. The remaining golf course was sold to developers to be used for homes in 1958, and the community is still named for the golf course, Emerald Hills.