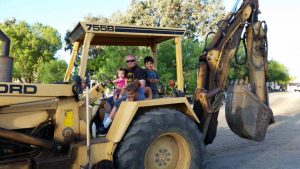 Bobby Bond Jr. was born to run a backhoe.

His father, Robert Sr., owns a backhoe dealership in Riverside County and put his son atop a backhoe as a toddler. At age 12, the younger Bond dug a septic tank and leach lines for a new home. He operated heavy equipment like a pro for years before getting his driver’s license.

While Bond Jr. didn’t take home the gold at the national meet, he’s determined to return this summer.

Backhoe operators had to remove tennis balls from atop five safety cones in the backhoe swing area and place a pipe lift pin into holes on top of three safety cones. Bond Jr. won with a time of 2 minutes and 25 seconds.

“When I competed in the county competition, there were a few hundred people screaming at me, trying to distract me,” recalls Bond Jr. “I have four kids (ages 2, 4, 7, and 9), so I know how to tune out distractions.”

He said the ability to focus is key to good results – not only in competition but in his everyday role with the Water Authority overseeing crews who perform ongoing maintenance on roads and pipelines. It’s not fun and games when public safety is at stake.

“You must stay focused,” explained Bond Jr. “When you are running the backhoe, a lot of time you’re digging around live utilities … I’ve worked with some people who get frustrated easily, and it can cause you to pull a lever too fast.”

Running a Backhoe With Help From Nintendo 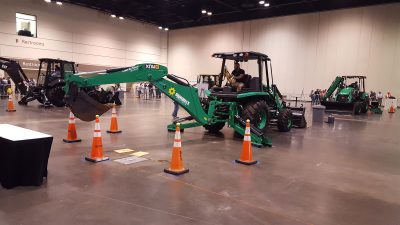 Modern backhoes use joystick controls instead of the foot controls common on older models for extending the backhoe’s boom in and out. While the modern backhoe is more precise, its controls are far more sensitive.

“You don’t feel the flow – the old ones would give you more pressure … You need to be smooth, you can’t be too fast or too jerky,” said Bond Jr.

While that experience didn’t add up to a win on the national level, Bond Jr. promises he’ll be back to defend his local title in May in hopes of earning another trip to the national competition in Kansas City, Mo., in late August. 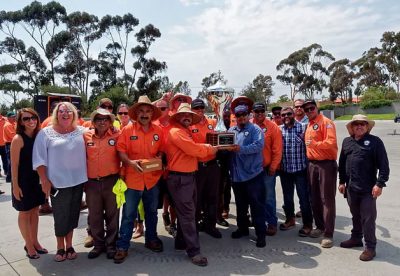 The Water Authority is hiring a SCADA Supervisor. The ideal candidate will be ...able to successfully organize and coordinate work relating to the Water Authority's SCADA systems. Deadline: 12/18. Details: https://bit.ly/3gZbYvi #workforwater #cawater

Hooray! We got much needed rain this weekend! Remember to save water by not ...watering lawns or ornamental landscapes within 48 hours of a recent rain event. Find tips on saving💧water💧here: https://saveourwater.com
#saveourwater

A look at Western #water supplies and the winter outlook in 10 maps @DroughtGov... https://www.drought.gov/news/western-snow-season-2022-23-preview-look-water-supplies-and-winter-outlook-10-maps-2022-11-30