You are now in News category. 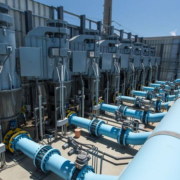 When I started my term as board chair of the San Diego County Water Authority in October 2016, California was mired in drought but the San Diego region had sufficient supplies regardless of the weather.

Thankfully, just a few months later, epic rain and snow significantly improved water supply conditions statewide, but not before validating our long-term strategy to develop a drought-resilient portfolio of water resources that protect the region during dry times. In fact, we had enough water to store 100,000 acre-feet of water for the future – a testament to regional foresight, coordination, hard work and investments by ratepayers.

Being able to assure residents and businesses that we had sufficient supplies to sustain our economy and quality of life was the biggest accomplishment of my two-year term as chair, which came to an end on September 30.

Several other highlights come to mind:

Read more of the column as originally published by the Pomerado News here.

Snowmelt is shrinking and runoff is coming earlier on the Upper Colorado River, the source of 90 percent of water for 40 million people in the West. This is leading to vegetation changes, water quality issues and other concerns. But it may be possible to operate reservoirs differently to ease some of these effects. In September’s episode of Deeply Talks, we spoke with two experts about the consequences and opportunities of these changes on the river.

The biggest ticket item on California’s November ballot, tucked between the governor’s race and local elections, is $8.9 billion in bonds to help modernize California’s sprawling waterworks. The measure, which was authored by a former state water director, would fund scores of projects, from shiny new desalination plants to upgrades of old dams and aqueducts to restoration of tainted watersheds, including San Francisco Bay. The initiative, Proposition 3, comes as a historic drought has exposed the vulnerabilities of California’s water infrastructure, and it has become apparent that hotter, drier times ahead will test the adequacy of state supplies.

Barely a week past summer, some Sierra Nevada peaks have received a dusting of snow — and a bigger accumulation is possible this weekend. The unsettled weather and brisker-than-normal temperatures that have lingered in the Bay Area this week brought hail and snow to the higher elevations of the Lake Tahoe area. The National Weather Service’s Reno office said that another wave of precipitation Friday night and Saturday could see an accumulation of 1 to 2 inches of snow at the higher passes, such as Tioga and Sonora. The greatest chance of snow showers at Yosemite’s Tuolumne Meadows is after 11 p.m. Saturday, the weather service said.

he CEO and two employees of a Riverside County-based painting company were sentenced after pleading guilty to contaminating San Diego’s storm water system by power-washing painted curbs and allowing toxic lead paint chips to flow into storm drains, City Attorney Mara Elliott announced Friday. The trio were placed on probation and ordered to pay more than$12,000 in fines and restitution, Elliott said. Ochoa Striping Services Inc. was contracted to sandblast paint from curbs in a Del Cerro neighborhood, Elliott said. That method of paint removal would have allowed workers to safely clean up and dispose of hazardous material.

The San Diego County Water Authority’s board of directors has elected Jim Madaffer as chair, Gary Croucher as vice chair and Christy Guerin as secretary. They began their two-year terms Oct. 1. Madaffer, who joined the Water Authority board in November 2012, is president of the public policy firm Madaffer Enterprises. A former city councilman, Madaffer previously served as chair of the SANDAG’s transportation committee and as president of the California League of Cities. Croucher has served on the Water Authority board for more than 17 years, serving as board secretary for the past two years.

Cadiz Inc., the downtown water company with a proposed project to pump and transport water from an aquifer beneath its Mojave Desert land holdings, announced Oct. 5 that it plans to donate up to $5 million from project revenue towards efforts to improve water quality at nearby water systems and throughout Southern California. The $5 million donation would be administered over a five-year period by the Fenner Valley Water Authority, which would then distribute the money to eligible small water systems that serve disadvantaged communities. The money would be used primarily to build water treatment systems.

Water saving in urban California continued to slide in August, but Butte County agencies generally conserved twice as much water as the rest of the state. The State Water Resources Control Board reported Tuesday that statewide, water use was down 12.6 percent in August, compared to August 2013. That’s a decline from 13.6 percent in July, 16.8 percent in June, and 20.2 percent in May. The numbers have been dropping fairly steadily since April 2017, when Gov. Jerry Brown declared the drought over, and mandatory conservation targets were dropped. The state actually used more water this February than in 2017, then conservation jumped to 24.8 percent in March, but has been declining since.