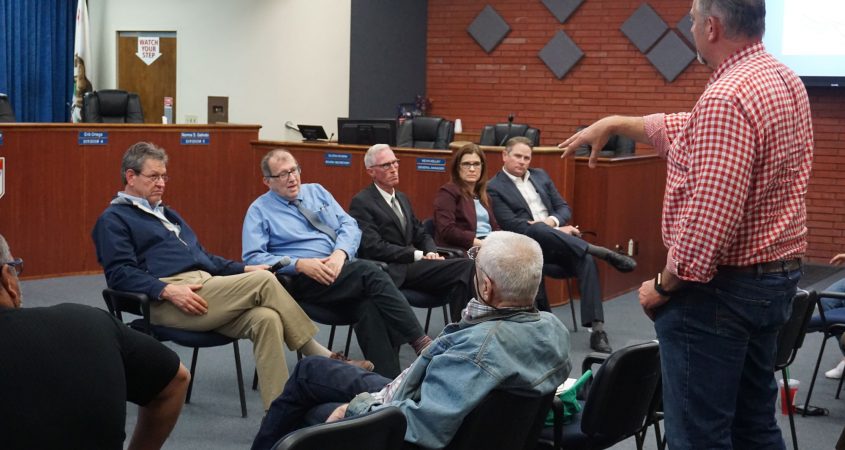 EL CENTRO – High-ranking agency officials delivered a simple – but critical – message during a standing-room only forum on Salton Sea issues in early March: The current Salton Sea Management Plan represents the best path forward for addressing immediate needs at the sea while laying the groundwork for long-term restoration.

Speakers emphasized that for the first time the State of California has a feasible plan for meeting its restoration obligations under state legislation related to the 2003 Colorado River Quantification Settlement Agreement.

In addition, funding sources are materializing to help make the management plan a reality and protect public health. Proposition 68, a water bond that would provide $200 million for Salton Sea restoration, will go to California voters in June. If approved, that bond would add on to an earlier bond that provided $80 million for Salton Sea restoration.

The March 5 workshop was the first of two organized by IID, the San Diego County Water Authority, Imperial County and the California Natural Resources Agency to keep the public informed about state restoration efforts at the sea. The state is working under the Stipulated Order, an amendment to the state’s original water order approving the 2003 Quantification Settlement Agreement. The Stipulated Order – drafted by IID, the Water Authority and Imperial County, with support from Natural Resources and environmental organizations – requires the state to provide 30,000 acres of habitat and air quality projects at the sea over the next 10 years.

Presenters made several key points, including that the longstanding environmental issues at the sea will not be solved by work done under the first 10 years of the management plan. Under the Stipulated Order, the state must have a long-term restoration plan in place in 2022. Denham emphasized that progress toward restoration must quickly translate to on-the-ground projects.

Kelley said it’s also crucial that other Basin States endorse the Salton Sea Management Plan – which they have begun to do – because a unified front could ultimately deliver more positive results.

While the state restoration program is in the earliest stages, a separate effort has been under way since the QSA was signed to implement an environmental mitigation program that addresses any impacts associated with the QSA. That mitigation program – led by a Joint Powers Authority comprising IID, the Water Authority, Coachella Valley Water District and the State of California –  provided mitigation water to the Sea for the first 15 years of the QSA until December 2017.

As of 2018, the mitigation focus shifted to an air quality program that includes on-the-ground projects, which can work together with the state’s restoration program. Already, the JPA has funded pilot projects on more than 1,000 acres near the sea. This year, 3,000 acres of new dust control projects are planned.

“Adán is a proven consensus builder who is ideally suited to lead ...Metropolitan’s diverse 26 member agencies during a period of historic transitions impacting water supply and the environment both in MWD’s service area and the Southwest."
— Water Authority Board Chair Mel Katz.

“Adán is a proven consensus builder who is ideally suited to lead Metropolitan’s diverse 26 member agencies during a period of historic transitions impacting water supply and the environment both in MWD’s service area and the Southwest." — Water Authority Board Chair Mel Katz. ... see moresee less