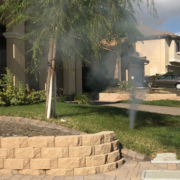 The test is performed by introducing smoke, comprised primarily of steam, through a device similar to a fog generating machine, into the wastewater systems. Staff can see if smoke comes out of the system through any leaks or breaches.

“We don’t want clean rainwater entering the sanitary sewer system, because we don’t want to treat clean water down at the treatment plant,” said Matthew Thompson, VWD wastewater collection worker. “We also don’t want to have an open system in case of an emergency, where liquids could exit the system.”

Residents are notified prior to any smoke testing in their neighborhood. The use of the smoke is an approved practice by the U.S. EPA and has no adverse health effects. The smoke used by VWD is non-toxic and dissipates quickly. During the testing process, residents can assist by monitoring the plumbing systems inside their homes to see if they have any internal problems.

Watch how the smoke testing process works in this video.

Crews inject smoke into the sewer system. It bypasses the living quarters of each residence before rising out of vents located on the roof. This is what crews are looking for, because it’s a good indicator there are no illegal hookups to the sewer. Smoke may also escape if the private sewer lateral clean-out is missing its cap.

If smoke emits from the home’s storm drain system or front yard, it could mean there is a possible illegal system connection, or an opening to the sewer that can lead to surplus water levels and subsequent sewer spills.

Field crews take care of any problems that may arise during testing. Residents are notified to disconnect illegal connections or face potential future fines. While the district does not maintain the plumbing inside homes, including the sewer lateral or the clean out, district crews will make simple, inexpensive repairs on the spot as a service to their customers. A doorhanger is left after any quick-fix is completed. 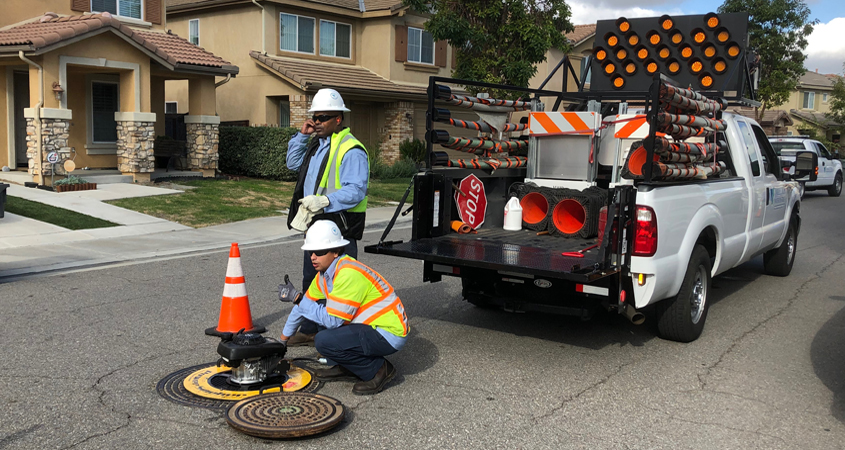 “Our ultimate goal is to make the customer happy, and that there is no interrupted service,” said Thompson. “If you see any of the wastewater crew out in the street, feel free to come talk to us and ask us what we’re doing. We’d love to share how we’re helping the system flow.”

In some cases, customers identify sewer problems themselves. District Systems Collection Department staff then determine the source of any potential problems, and how to resolve those problems.

Smoke testing isn’t new, but it might catch residents off guard. It has been used since the 1950s. For more than 10 years, smoke testing has proved to be a valuable ally in sewer maintenance. The Vallecitos Water District performs a minimum of four tests annually to keep its system operating at the optimum level.